I found this book a few months ago in a used book store and I found myself immediately drawn to it. First of all, I don’t tend to find any of Stoker’s non-Dracula works in used shops all that often, and second, they never have covers this cool. For some odd reason I think I own at least four separate copies of Dracula and all of them have very boring covers (with like blurry impressionist paintings or some generic graveyard.)

What’s funny is that book (published in 1968 by Tower Publications) is obviously being marketed by the Dracula’s Curse story which is only twelve pages long, while the bulk of the book is actually The Jewel of Seven Stars novel. Heck, Dracula’s Curse isn’t even really about the titular character for that matter. Either way, it’s an awesome piece of work, so I felt it was well worth sharing here for the Halloween countdown.
Unfortunately the artist isn’t given credit so I have no idea who painted this or if it was even originally for this book or some other bit of merchandising. 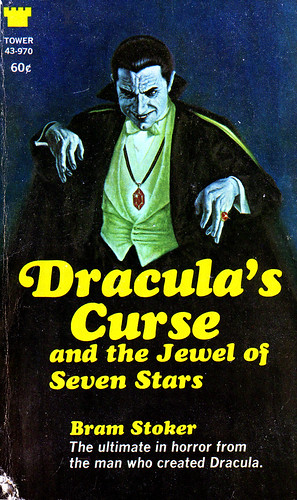 Peel Here 122: Filling in the gap of the Shirt Tales

A model car that is begging to be busted up!

Thrashor is the Master of the Radical Universe