More Halloweeny Wonka than you can shake a package of Nerds at!

All right, I just really can’t hold back on the Halloween blogging goodness any longer. I’ve been sitting on three pounds of candy for weeks now, and it just sits there on the kitchen table staring at and taunting me. Well some of it is actually appearing to stare at me what with all the lifeless, molded, sugary eyes, eyes that I just can’t keep hidden any longer.

As I’ve stated before, when it comes to candy I am basically a gummi/hard/chalky kind of guy. It’s not that I don’t like chocolate or anything, I’m just not all that into sweets in general, and so when I do reach for something it’s usually in the form of a watermelon Jolly Rancher or Twizzlers. Typically I also hold out on candy all together, that is until the stores start stocking up on Halloween candy, and then I feel an irresistible urge to stuff my face with everything that I see. In the past my wife and I have pretty much held off until all the ghoulish loot goes on clearance the day after the holiday, but we’ve begun to notice that more and more stores are changing their practices on discount candy. More often than not, the candy goes on sale before Halloween and then when we go looking it’s practically all gone.

So last year I decided pretty much to buy one big bag that was hopefully varied enough to get me through, and I thought I had found a goldmine in the Scare-n-Share bag. How wrong I was. So this year I’ve learned my lesson and I’ve stuck more or less to buying individual bags and goodies, but I had to take a chance on another mixed pack when I laid eyes on the sexy looking box of Wonka Creepy Treats! 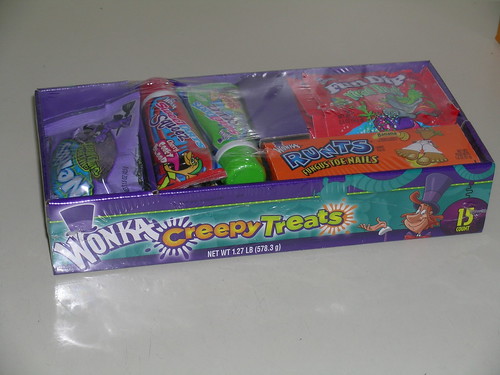 When I saw this sitting on the shelf at my local Target I just stared googlie-eyed with glee, probably because it was so tightly and neatly packed with practically all of my favorite candies from when I was a child. I did balk at buying it on the first trip though, as the stock-lady was still working on that four-foot section of candy and honestly it’s sort of steeply priced (at about $12 give or take a few cents.) I mean it is a pound and a quarter of candy, but still, when was the last time you slapped down $12 for Runts, Fun Dip, Nerds and Sweetarts? I couldn’t help myself the next time I was in though, as I had a chance to take a much closer look at what was included in the set. If I remember correctly, in the past the Wonka candy offerings during Halloween have been relegated to pretty much their normal candy (though in fun sized portions) in pretty much run-of-the-mill holiday packaging. Not that there is anything wrong with that, Halloween candy is built on the tradition of getting smaller portions of normal (and some seasonal) candies, but there’s a dark little demon that sits in the pit of my stomach making it ache for more creativity in Halloween candy. So what was in this set that took me over the edge and got me to eagerly plunk down 12 hard earned bucks? 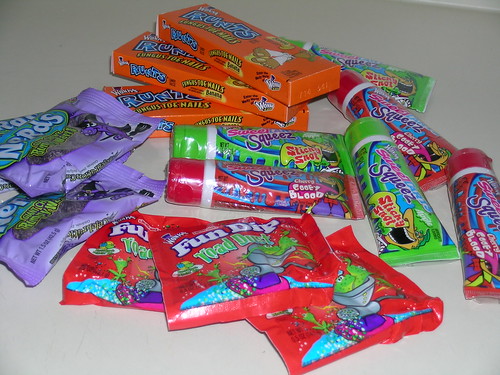 Well there are 4 varieties of Wonka mainstays (Runts, Nerds, Sweetarts, and Fun Dip) in five flavors (there are two separate Sweetart flavors), with three packages of each for a total of 15 (almost normal-sized) packages of candy. The kicker for me was that each separate variety was branded with a new Halloween-y name and a themed character.

The most interesting candy in the set are the Nerds branded Giant Chewy Bumpy Warts, if only because these are the only ones included that are doing something a little different candy wise. On the back of the box these are listed as Nerds Jelly Beans, which I’ve never seen in stores (the closest product would be the Nerds Rope I guess), and essentially that’s exactly what these are. Think of a regular jellybean with the normal soft candy shell removed and replaced by a crunchy shell with Nerds candy mixed in. The packages found in these Halloween sets are grape flavored and feature a slightly gross variation on one of the patented Nerds characters with a very warty schnoz, which I assume these jellybeans are meant to represent. 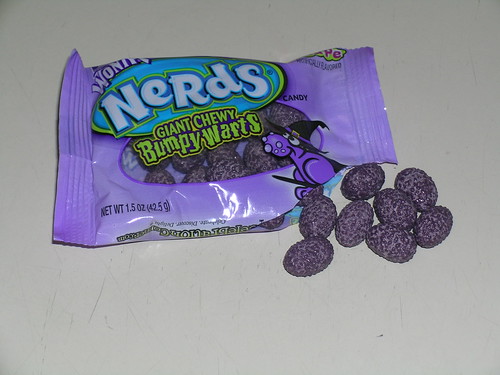 Following the candy variation of the Bumpy Warts, my favorite candy in the set has to be the boxes of Runts Fungus Toenails… 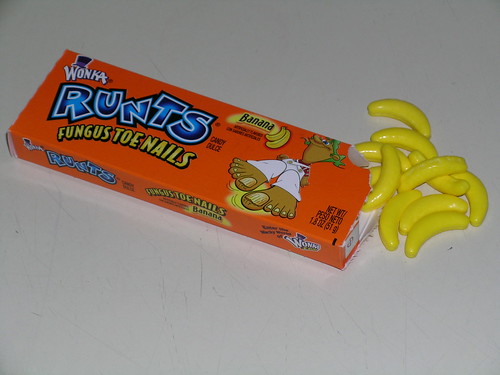 At the end of the day these are just boxes of banana Runts, but they also happen to be my favorite flavor (and yes, I admit that they are terrible chemical tasting as most banana flavored products tend to be, but I love ’em anyway) and I would have to vote the new name and concept as pure genius. What a perfect and gross way to capitalize on an existing candy shape (bananas make for awesome thick toenail clippings) for a seasonal item. The picture on the box is fun as well with a sufficiently disgusting close-up of some gnarly Lumpa toenails. The only thing that would have catapulted these into the stratosphere would have been if the color had been tweaked a little to more of a tan or khaki shade of yellow, but I’m not really complaining here. 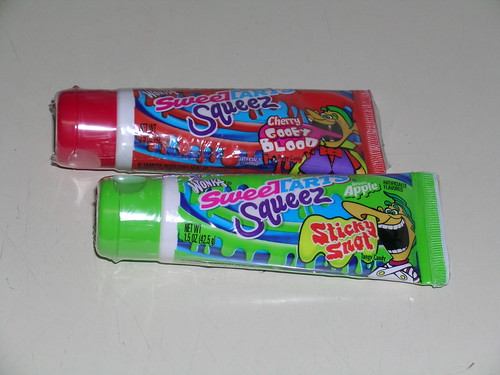 I think the Sweetarts Squeez are normally available in a variety of flavors, but their inclusion in this set is pretty cool, in particular the Gooey Blood variety as it reminds me of an edible tube of stage blood (with a vampire Umpa Lumpa no less.) Even though I’m not all that much of a fan of the Sweetarts flavor in general, these are pretty nifty, though I think they out balance the rest of the set with six tubes (almost half of the set), but it could be worse I guess.

Rounding out the set are three packages of (get this) fun size Fun Dip (one lik-m-aid stick and one pouch of candy dust) re-branded as Toad Dust. Though this is probably the least changed of the various candies, it’s still pretty gruesome, what with the cartoon toads happily going to their end in a meat grinder. The dust is the color (and supposedly flavor) changing blue raspberry to green apple variety, which though again isn’t my favorite, it is at least fun and interesting. 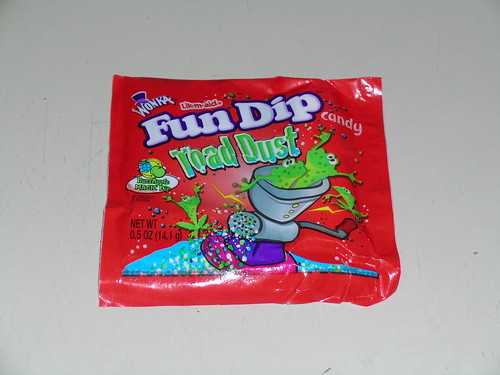 All in all the set probably isn’t worth $12 (I think $7-8 would be a much more comfortable price point), but it is pretty creative and fun. Like the giant gummy frog dissection kit I reviewed last week, this set seems less about giving to trick-or-treaters on Halloween and more tailor made for splurging on one’s own kids (or in my case, my own adult self.) Though normally I’d find this aspect neat, it’s part of a trend in Halloweening, which is shifting the way the holiday is celebrated. I know it’s nowhere near as dead as I’m making it out, but it seems like parents and companies are sort of shifting away from a community celebration to a more personal one, and I find that kind of sad (even if it does mean a whole bunch of useless Halloween swag that I can splurge on ever year.) Call me a traditionalist.

There are about three or four more packages of candy that have really caught my eye this year, so I’ll probably be sharing those over the next week or so to gear up for the insanity that is 31 straight days of Halloween blogging (and if that weren’t crazy enough, Cartoon Commentary! columns as well.) Man I love this season…

Wax Paper Pop Art #12: One of the best looking mustaches in the business…