Even though it might seem like I’m more into Filmations Ghostbusters after reading this blog, I was actually weaned on the Real Ghostbusters cartoon as a kid. I was a pretty big fan of the two movies, and at the time I was still young enough to whole-heartedly accept the cartoon, even for all of the odd changes that were made in character and design, not to mention that fact that Lorenzo Music whose voice is synonymous in my head with Garfield, did the voice of Peter Venkman in the first half of the series (a fact that wasn’t lost on me even as a kid.) I loved the fact that Slimer was now both sort of a good guy and part of the team, which is also both very odd (seeing as how he’s a ghost) and makes perfect sense in cartoon terms. I have to assume it’s Disney’s one weird contribution to the world of animation, that all cartoons must at least try and have some sort of animal or creature as part of the cast. Look at the Punky Brewster Cartoon and her weird leprechaun-like pal Glomer, or Uni in Dungeons and Dragons. Heck, wasn’t there even a raccoon in the Pole Position cartoon?

Anyway, I am a fan and I’m glad that I was able to dig up some stickers merchandised off of the show to share on this week’s Peel Here. These three packages of puffy stickers were released in 1986 and feature the entire main cast in all of their multi-colored-suited glory. Since these sets of puffy stickers seem to come in sets of four, I’d bet hard earned money that there is another set floating around out there somewhere. In fact I’d be willing to bet it would have at least a couple more Slimer stickers (as he’s very under-represented in these three sets) as well as at least one more Egon (if not two.)

The bottom left Ray sticker in this last package is also inadvertantly ghoulish as the pupils were left off (an he’s all gape-mouthed and all.)  I thought it was a nice bit of kismet for a set of Ghostbusters stickers to have an error like this.

Another aspect of the cartoon that I think it pretty interesting is how Janine’s role was beefed up, not to mention the fact that the character had a sort of Cyndi Lauper-esque make over that managed to carry over into the second live action film. I’m not sure if this is a coincidence (as her role in the second film was possibly beefed up due to the fact that Annie Potts’ career was on a high note with Designing Women and all.)

As a bonus this week I present some leftover Ghostbusters puffy stickers that really didn’t merit a column of their own. When I was buying stickers off of eBay there was a great seller who would throw in a bunch of extra single stickers, and over time I managed to scrape together a tiny set of these small GB movie stickers… 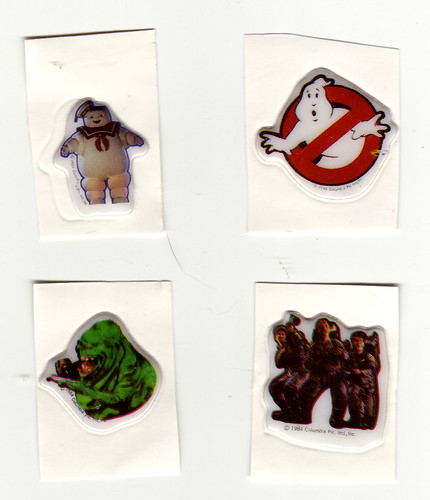 In addition to these I also present some of the worst and yet best bootleg stickers I’ve come across. At first I felt that I was burned on eBay when I purchased these ‘vintage Ghostbusters puffy stickers’ when I got them and realized that they were bootlegs, but after taking a look at the bottom right sticker I just couldn’t be angry. Man, remember when the Ghostbusters had to chase down the rabid ghost of an angry red-eyed panda? Me neither, but the sticker sure does look cool. These stickers also get the esteemed honor of being the only ones I’ve shared so far with profanity on them, even if the word is as harmless as ‘ass’… 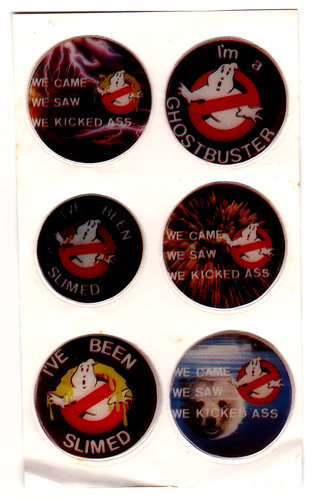 Next week, more Ghostbusters goodness as I bust out my official GB training manual/sticker book.

These Should Exist: The Monster Squad Edition