So, this weekend had some fun and excitement in store as the Secret Project that I mentioned last week was finally revealed to the world during a midnight live podcast this past Saturday. No I can finally make an announcement about a new comics anthology called Sugary Serials, an all ages book that takes a cue from the Saturday Morning Cartoons of the 60s, 70s, 80s, and I guess a little bit of the 90s… 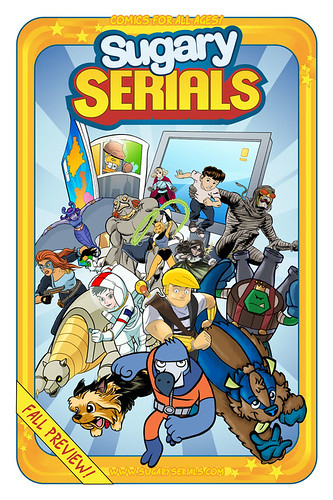 You can listen to the announcement podcast, which was moderated by Jerzy Drozd (of Make Like a Tree Comics) and his friend HooveR, and featured some of the upcoming contributors including Mark Rudolph (of Control Voice Comics), Kitsy and Kimonostereo (of Nemu Nemu), as well as publisher and contributor Barry Gregory. I also provided a couple minutes of my promised stammering, if that’s a draw.

The anthology, like I mentioned above, is an all ages comic, but before you start getting images of Dora the Explorer dancing around in your head, I’d like to remind you that all ages doesn’t mean for children only, but for ALL ages. Think Watership Down, the Goonies, Ambush Bug, or the Tick. Heck, actually the best example of all ages that I can think of are the fairy tales that have been handed down orally for centuries, some of which were collected into volumes by the Brothers Grimm, or le cabinet des fees (the Fairy Cabinet) published by Charles Perrault. These fairy tales (or in essence all fairy tales) are not for kids, but for everyone, and can be just as scary, adult and disturbing as they are filled with wonders and, well, fairies.

The comics of this anthology range the gamut of action, adventure, and comedy and have a wide variety of styles and settings from Victorian steam punk to super hero, Sci-Fi to Fantasy, and beyond. Diversity is one of the most intriguing aspects to the anthology, yet it’s all still all focused under the theme of being influenced by Saturday Morning cartoons. Some of the other creators involved in this anthology include: Chet Lucero, Sara Turner, Scott Neely, Robert Burke Richardson, Dario Carrasco, and Matt Putnam-Pouliot.

You can find out more about this project by hoping over to the website, where you can download or view a copy of the launch preview book, join the forum to talk about the comics or ask questions, not to mention taking a second to listen the Sugary Serials theme song composed by Gina Pensiero of Umberto and I am Janet. If you like what you see you can also pick up a print copy of the preview book from Indy Planet, as well as strolling over to the comicspace page.

Taking a closer look at Season 1 of the Transformers…