Join in on the Saturday Supercast this Friday night at midnight!

I thought I’d take a second to mention a few cool things that have been coming down the pike recently, the first of which is a new podcast from Jerzy Drozd of Make Like a Tree Comics and friend Hoover, called the Saturday Supercast. The podcast is part of a super secret project that Jerzy and a host of talented artists and writers have been working on for the last year or so, that will finally be unveiled this coming Friday, August 31st, at midnight (or for those out there that see the glass in a different perspective, Saturday, September 1st, at 12:00 in the morning.) The project, the details of which I won’t spoil, is very much influenced by practically everything that influences and informs Branded in the 80s, so it’s quite possibly something that anyone reading here might be interested in as well.

The Saturday Supercast podcast will be recorded live via TalkShoe, which is important to mention because not only can you listen in live, but you can also call into the show or chat and ask questions or give your two cents on the announcement and the project. I’ll be participating as well, offering plenty of stammering and hopefully some insightful comments (no promises), so if anyone would like to call into the show you are all officially welcomed. Like I mentioned above, it will be a little late at midnight, but hopefully this will bridge the time gap a little between any U.S. and international listener/readers. If you can’t make it for the live recording, you can also access the finished show from the Supercast TalkShoe page later as well.

To take part in the podcast, you will need to download the TalkShoe software and sign up for a free account. This will enable you to listen in and chat, but if you would like to call in you will need to either use a use a VoIP (voice-over-IP) service like Skype (in which case you will either need the SkypeOut Unlimited plan; you’ll need either a headset, or a microphone, speakers or headphones), Gizmo Project (which, like Skype, turns your computer into a phone; you will need a microphone and either speakers or headphones, but unlike Skype it’s free to call out), or TalkShoe’s own Shoe Phone (which is free for TalkShoe users in it’s beta format, but you have to make sure you initialize it to enter the beta testing.) You can also call in over your normal phone, though long distance charges will apply. The phone number to call into the podcast is (724) 444-7444, and you’ll be prompted to enter the show ID: 38795. I’m not sure if there’s anything else, but if you need any additional TalkShoe help, you can visit their FAQ.

If you’re curious about the type of comics that Jerzy does you can visit the Make Like a Tree comics site where you can read them for free, or you can now pick up a copy of his trade for the Front: Rebirth comic at Indy Planet. 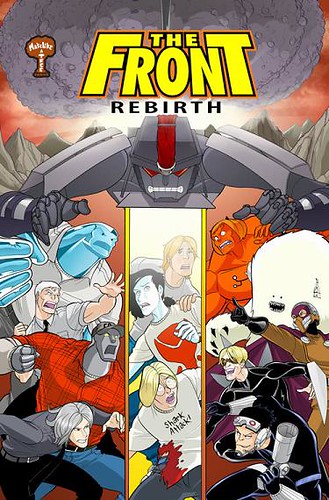 I’m really looking forward to the unveiling of the new secret project as I’ve had a chance to see a lot of the work that’s been put into it and it looks like it’s going to be a whole lot of fun.

Fine art from the fine folks at Cricket Press