Well, I missed this episode last week, but who’s really keeping track of a schedule right? It’s kind of weird actually, how I try and box myself in to themes and schedules, which helps to keep me focused and relatively prolific, yet it takes all the spontaneity out of blogging. Anyway, on with the show…

The episode we’re going to take a look at today is titled Beauty and the Bogbeast, which originally aired on October, 22nd, 1983, and was again written by Jeffrey Scott, the man who, by the way, has sort of written the book on how to write for animation (well, maybe not the book, but certainly a book, a well received book at that.) Like I mentioned last week, Scott has a nice record of long stints writing on the same show, which is sort of rare in animation, at least it appears that way. 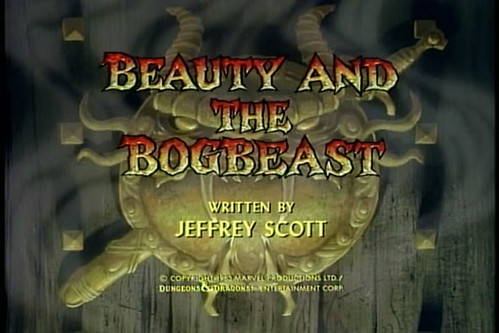 In a fairly funny twist on the typical opening sequence (not the credits sequence mind you) where the kids are usually running for their lives, this episode opens on the gang on the offensive, stalking an invisible entity through what appears to be an area with a ton of lava. I’m not sure if this was unconscious or an attempt to sort of pick up from where the last episode left off (where Dungeon Master fought off Warduke and his minions by summoning an eruption of lava.) It was sort of jarring to see the gang working as a team, with all of their weapons/items glowing and ready as they surround the entity (which they’ve tracked via a series of foot prints), as they’re more apt to fight with each other than to work together. Turns out that it’s just Dungeon Master, but it was nice to have an episode start off differently for once. 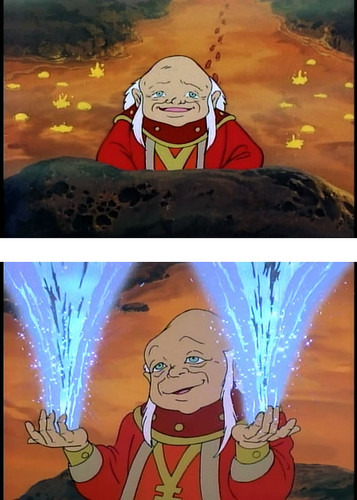 DM’s guidance in this episode is very dynamic, much like in the first episode, with interesting visual aids (rivers running skywards and such), a practice that I believe is sort of rare throughout the rest of the series.

This is also one of the first times when the group splits up at the beginning of the episode (well, Eric storms off in the last episode for his mini adventure in the swamp, but that was more of a temper tantrum than the group splitting up.) It’s sort of weird now that I think about it because of the circumstances in the realm, what with the kids essentially being lost and all. It’s not like they could easily meet up at a destination or something. I’m wondering, though, if maybe I’m just projecting my own fear of getting lost on this situation. I think maybe it’s easier for other people to split up like this knowing that they could double back and wait at the last place they were all together (I mean is this common sense?) I don’t know, but again, later in the series you don’t see the gang split up all that often. The one thing I did like about the split was that it broke up the linear plot of the episode and made viewing a more interesting experience.

After Hank, Sheila and Bobby split off they run into a pretty cool metal giant…

After messing around it for a bit, the giant comes to life and attacks the kids, scooping up the brave Bobby and Uni. Right before he crushes them Hank once again ends up using his energy bow as a tool (and once again to get Bobby out of danger), in this case as a sort of flying carpet/witch’s broomstick, which Bobby and Uni ride to safety. I still find this incredibly weird in terms of trying to get a handle on the ‘rules’ regarding the energy bow usage. Does Hank have some sort of telepathic link with the bow in which he can switch it from being harmless (in terms of the arrows being constructed of energy) to dangerous (as we’ll see in a minute)? Or is there something more going on as he draws back on the ‘bowstring’ where he has control over what exactly will propel from the bow? I know it’s just a cartoon, but it fascinates me none the less.

At least after he saves Bobby, Hank uses his energy bow as a tool in a way that makes more sense as he fires a bunch of volleys between the giant’s feet, basically soldering them together so that he’ll trip and fall. 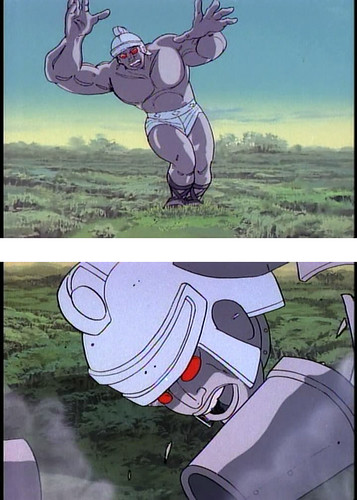 Granted, the giant/golem is constructed out of metal and might not technically be a living creature, but this is the first being that the gang willfully destroys, again, something of a rarity in the series, as well as cartoon in general.

Elsewhere, the rest of the group stumbles upon a river, though it’s not the one prophesied by Dungeon Master. Instead, we get to the gist of this episode as Eric, against the cryptic warning of DM, sniffs a flower, which ends up turning him into a frog-like bog-beast.

It’s kind of interesting when you consider the character of Eric, who is almost the opposite of the rest of the main cast. While everyone else is more or less heroic or brave, Eric is conniving, rude, self-centered, and basically a whiner, but more importantly he’s actually trying at times to do what the entire group wants to do, which is to get home. What’s interesting is that when refining the show and writing the series bible, Mark Evanier was basically told to leave the character in the show, as he would be the key to inserting the moral lessons which were rampant in 80s cartoons. Evanier talks about this on his blog (it’s close to the bottom of that link’s entry), and he has a really interesting point, that when you boil it down this is sort of disconcerting. See, this type of character will often be the voice of decent in the group and by the end of the episode ‘learns’ the right way to do things, which is basically what the rest of the group wants to do. As Evanier writes, it’s basically saying that you should follow the majority, which doesn’t necessarily come off as all that bad in these cartoons as the seemingly ‘right’ decision is written to be the view of the majority, but it’s still a bad way of thinking about things.

Getting back to the episode, it’s at this point where we get a second visit from Dungeon Master to sort of keep the kids on the right path, as Eric’s transformation is only half of what they are to encounter on this quest. It also possibly shows some of the limitations of his power as he explains that since he did not have a hand in the magic that changed Eric, he can’t undo it (as well as getting a self reliance message across.) 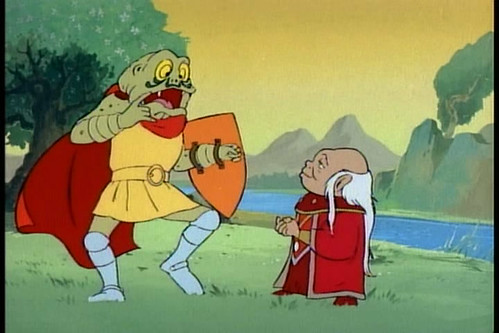 Though it’s a quick segment, there are a couple of small flying dragons that could count towards the obligatory dragons for this episode… 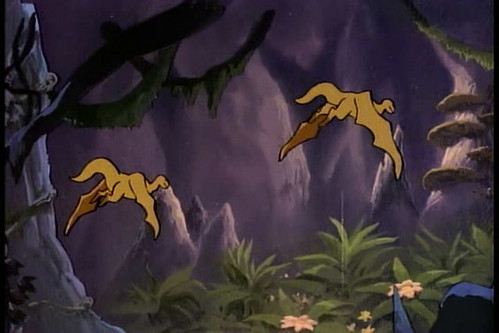 Of course, so could this serpent like dragon creature that Presto, Diana, and Eric meet up with in a swamp…

We’re also introduced to a whole village of bog-beasts, which look pretty freakish, what with their concentric circle eyes, and stuff. I think the females throw me off the most. It’s the long hair that does it. 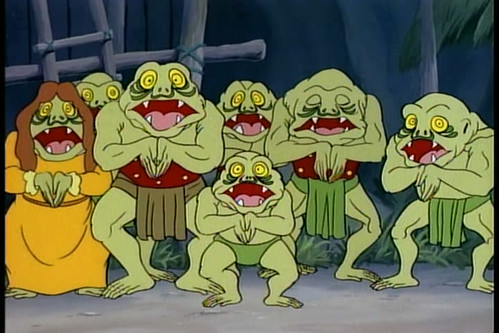 There’s a second giant in this episode as well, Cawamung, who rules over this underground area and who is trying to drive the bogbeasts out of their homes. He seems to derive his power from his magic amulet, which I found kind of funny, as it’s a yin and yang symbol. Though in the end it fits, what with how the episode plays out, it’s still strange to see Chinese iconography in a fantasy setting, something that’s actually pretty pervasive throughout science fiction and fantacy. 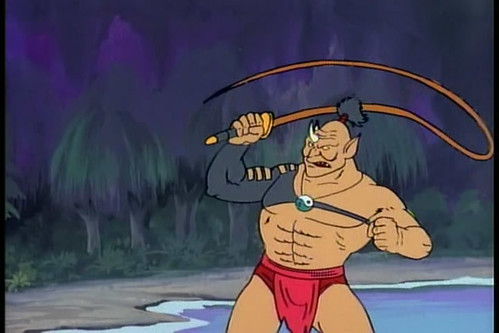 Again, we see the slaves of choice are dwarves, predominantly red haired dwarves. 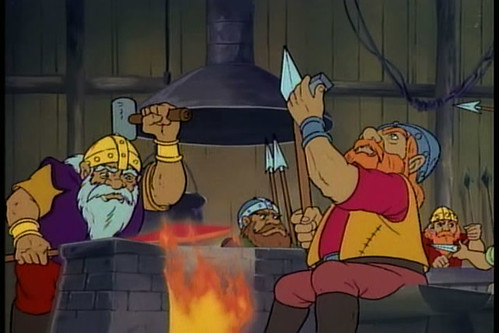 For a third time in this episode we see Hank uses his bow as a tool, in this case mimicking the action of a boomerang.

Unfortunately, it’s all for naught as Cawamung displays his real, hidden talisman/amulet. Seems kind of pointless to go to the trouble of animating such a weird usage of Hank’s bow when in the end it was all a waste (and pretty much a pointless one, as there’s no real reason that the end sequence had to flow the way it ends up anyway.) 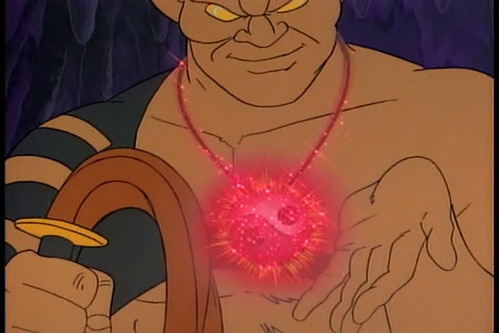 Villains seem to freeze stuff a lot in this show, what with Kelek freezing the kids in the unicorn episode and Warduke freezing Dungeon Master in the previous episode. 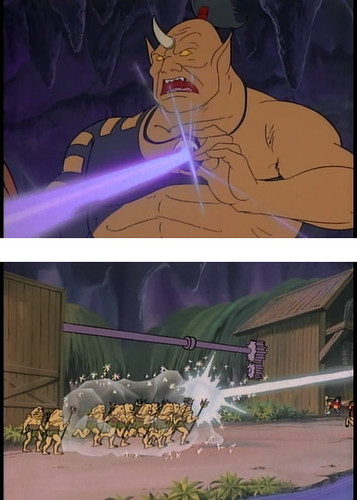 I did like the gang pouring it on and basically realistically attacking Cawamung in the end. Hank actually uses his bow correctly (though he misses all his shots) and Diana does a little one on one physical combat with Cawamung’s head. Maybe it’s because I’m an adult now, or maybe it’s just that I’ve seen too many violent movies, but this just seemed like it was more of how the show is supposed to feel.

To top everything else off, the Gang actually makes it home, if only briefly. Though they saw the way home through a portal in the Eye of the Beholder episode, here they who group actually makes it back to the theme park (Uni curiously included and not appearing to be effective by the regular world.) Eric, though, isn’t returned to his normal self, and the rest of the gang is still in their realm wear, so it’s pretty obvious that it’s too good to be true.

Eric, returning to the realm because he can’t bear to live as a bog-beast, leaves the rest of the gang in a very tough spot. Do they abandon their friend and stay home, or do they once again sacrifice their desire in order to do what’s right? 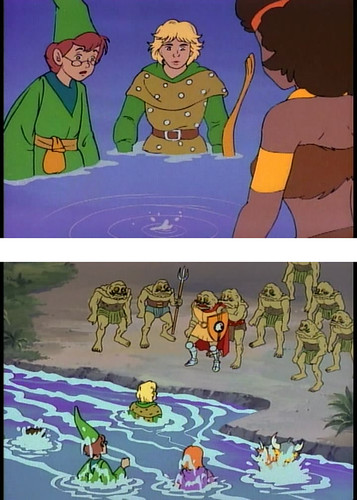 I’m also kind of confused on the ending a bit as Eric changes back to his old self as the rest of the gang returns to the realm. I’m not sure if it’s because he gives up and accepts his bog-beast status or if it’s because he returned to the realm (which is what he hates the most, and what was in DM’s riddle at the beginning of the episode.) If it’s because he chose an option that he hated, e.g. staying in the realm, than this whole moral is sort of twisted. I think I’m sticking with his coming to grips with his vanity, as it just sounds better.

Again, as in the last episode, Dungeon Master makes a third appearance, this time to share in the happiness of the gang because Eric was changed back to normal. I think I enjoy this type of ending much better than the style where DM would pop up away from the kids and sort of gloat from afar. 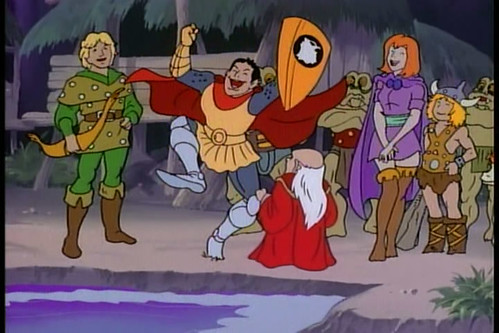 This is the first episode that doesn’t feature Venger at all, again, another convention broken by Scott’s tenure on the show.

Next time we’ll take a look at episode 7, Prison Without Walls written by the guy who created Howard the Duck.

Wax Paper Pop Art #21, Where no Spock Mego figure has gone before…

The Lost Pieces of The Monster Squad