As I promised, I’m finally getting around to talking about an issue of Stickers Magazine again, though this time it’s an issue that was close to the end of the publication in 1987. I believe that there were 16 quarterly issues (total) of the magazine put out over 4 years, and honestly, even though I’m beating this whole 80s sticker craze into the ground in this column, I’m surprised that the magazine lasted that long. At the end of the day there just isn’t all that much to talk about when it comes to stickers, and even though I’ve held two of these issues in my hands it still surprises me that ever existed.

In fact, I believe that the publishers pretty much ran out of material around issue #8, as the magazine was re-titled from Stickers Magazine, to Stickers & Stuff (with emphasis on the Stuff.) Though I haven’t had a chance to peer into any of the other issues in the run, I have to believe based on issue #7, and the one I’m about to share, issue #14, that coverage of the sticker craze pretty much ended in 1985. In fact, there’s practically nothing about stickers in this issue… 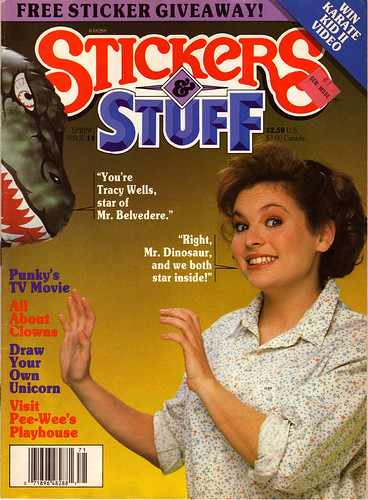 Actually, the best bit of sticker nostalgia that this issue has to offer is an ad on the inside front cover for the Pineapple company which offered a variety of generic stickers and toys very much in line with what the Oriental Trading Company offers today. Even with this ad, the most interesting bit is the horrible Madballs knock offs called Fatt Heads. Actually, I believe that this ad also ran in the G.I. Joe magazine if I’m not mistaken, as I seem to remember it pretty vividly from my own childhood. You’ve gotta love some of these products that are offered, with their pitch perfect 80s design work. Checkerboard, check. Odd, pointless geometric designs, check. Loud colors with liberal use of pink and green, check. 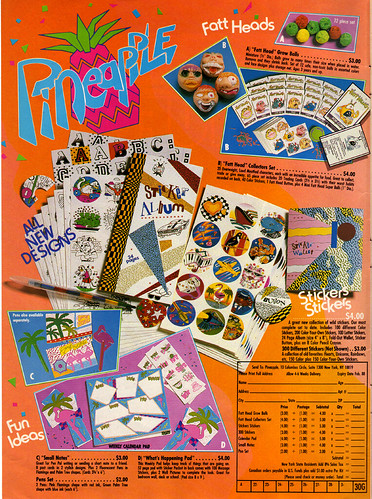 From the cover and the table of contents here we can get an idea of what was covered in this issue, which is fairly unisex, which I believe is odd for this magazine. Sure, there’s a section on how to draw a unicorn, but practically everything else could have been enjoyed by girls or boys. There’s an article on Pee Wee’s Playhouse, one on dinosaurs, and an expose on clowns (which are pretty much equal opportunity when it comes to scarring children of both sexes.) I see that Soleil Moon Frye was also given her own column called Punky’s Place. 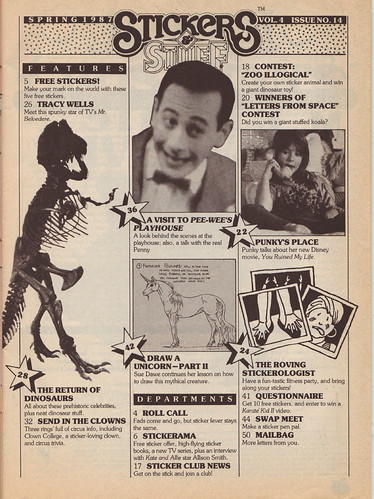 On the staff message page, though, you can definitely see that the publishers can see the writing on the wall as far as stickers as a fad goes, even though they are trying their best to keep a calm and composed face about it… 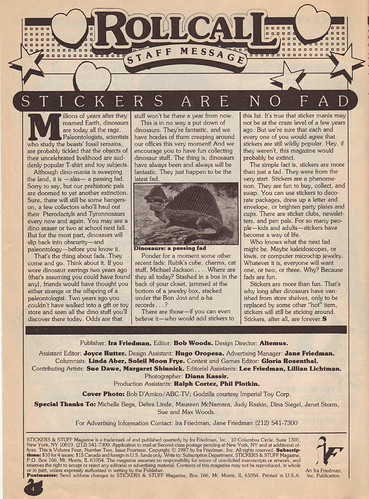 Maybe they were just trying to reassure the young collectors that even if there wasn’t a magazine to reassure them, that their interest in stickers was still valid. 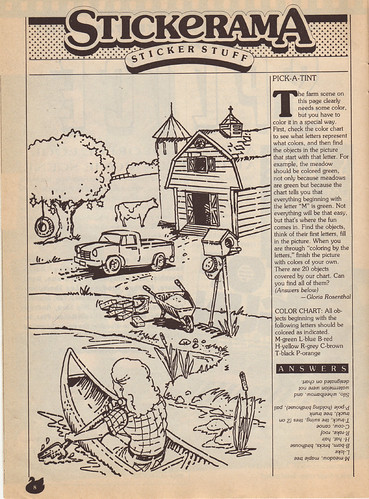 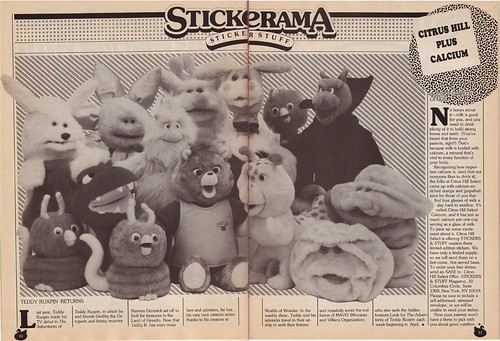 You know, I never realized that there were so many other toys available in the Teddy Ruxpin line. I wonder if they all had cassette players imbedded in them or if that was just Mr. Ruxpin himself. I always wanted to know what it would have been like to stick a Misfits tape in Ruxy. That’d be a fun custom Ruxpin, with the chunk of slicked hair hanging in the middle of is face, and maybe black fur to replace his more friendly light brown. 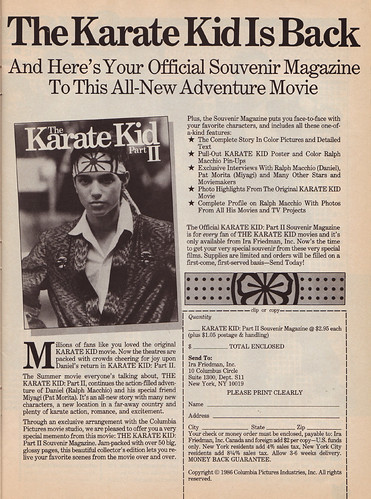 When I took a look at issue #7 of Stickers magazine I saw that the same publishers also released a souvenir magazine for the Goonies movie, and I had wondered if they were also responsible for the Karate Kid magazines. Well, my question was answered as I saw this mail in ad for that very magazine, one that I had as a kid and read at least a dozen times through. I always thought Starlog was responsible for these magazines (and I do believe they published their fare share through out the 70s and 80s), but I guess this crew covered some of the more child friendly flicks.

I was kind of curious why I didn’t see any toy ads in the magazine, I mean considering their demographic and all, but there was this one ad (which was broken up over four separate pages) for Furrever Friends that was pretty interesting. I don’t remember these odd stuffed animals that doubled as keen fashion accessories, but I’m sure any of the girls who dared to wear these out in public still have the emotional scars to prove it… 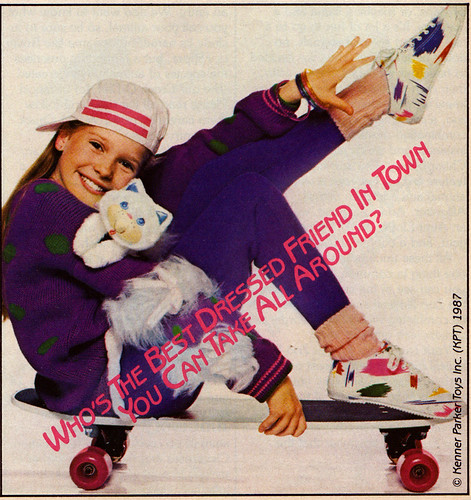 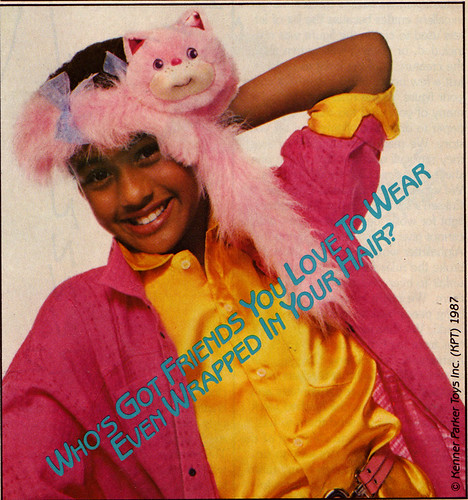 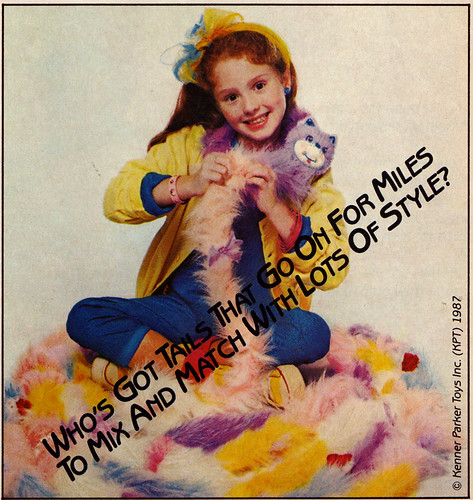 Along with the big reveal of the Furrever Friends ad there is also a little bit of space set aside for the Soleil Moon Frye column, which is funnily enough, about, well, herself. I guess it’d be kind of hard for an 11 year-old to come up with some hard-hitting sticker gossip, so it sort of makes sense that it was more of a space to make career announcements (as well as providing up to date info on the Punky Brewster show.) 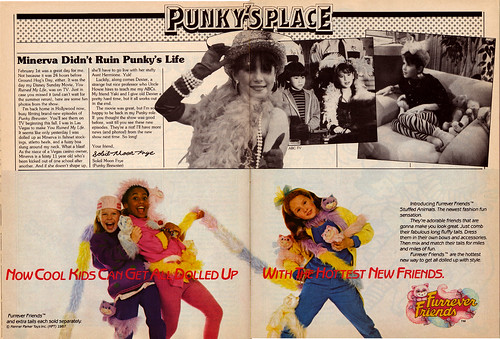 The feature article for this issue was dedicated to Tracy Wells (of Mr. Belvedere fame, though according to IMDB she also made appearances in Gremlins, Silver Spoons, and Growing Pains, and according to this article it also has her in the Goonies which for the life of me I don’t remember.) 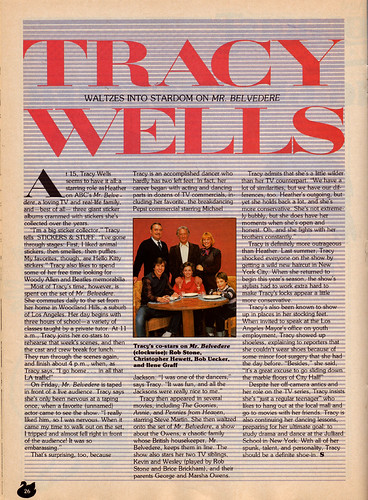 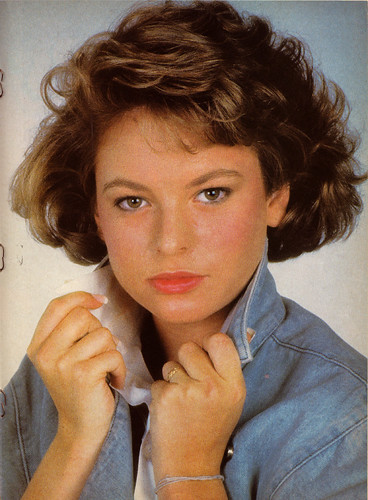 This dinosaur story seems like it needs a little bit too much padding from our friendly neighborhood Godzilla, but at least there is a quick plug at the end for the Dinosaucers cartoon, as show I dearly miss. 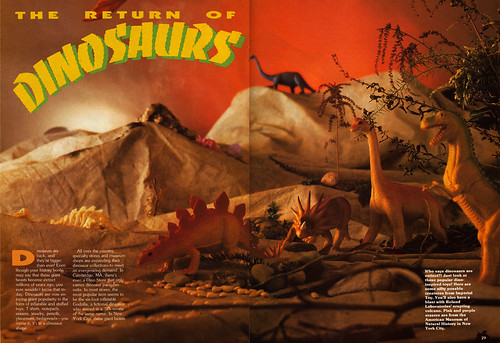 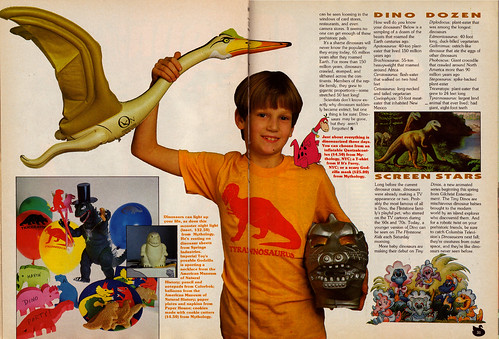 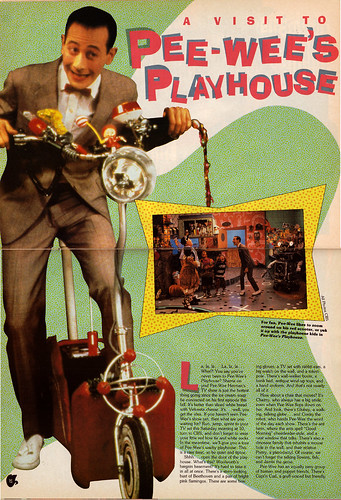 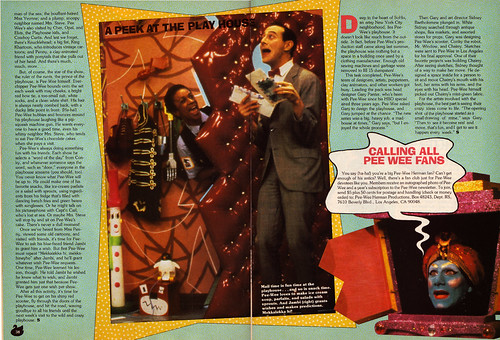 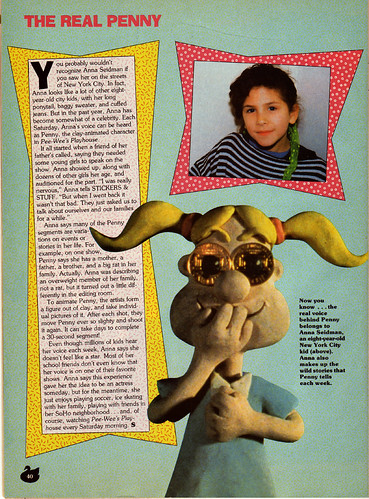 There’s also a quick bio of Anna Seidman, the voice of Penny from Pee Wee’s playhouse, in which she states that her involvement in the show has made her decide that she might like to be an actress one day. According to IMDB, this hasn’t materialized yet. I wonder if she’s still trying? 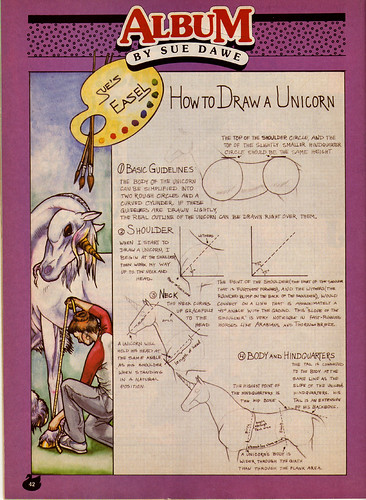 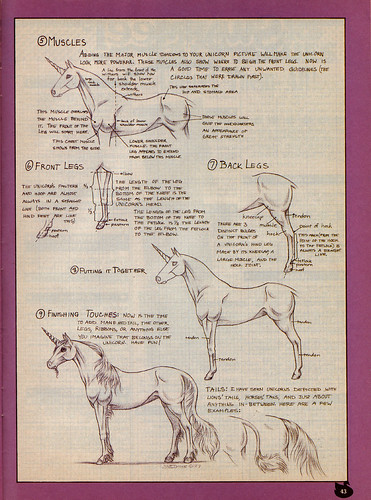 For all those fans of Stickers magazine, there’s a nice ad for back issues here. No, obviously you can’t order them anymore, but at least there are now some grainy black and white photos of what the covers looked like for the first 11 issues. Hey it’s something, I mean there aren’t a lot of places on the internet to find info on this mag, let me tell you. 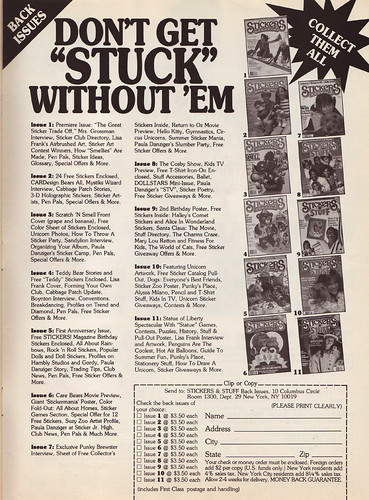 Last, but certainly least, we have an ad for a line of Lisa Frank clothing that is making my eyes hurt for colorfulness and joy.  The girl on the right reminds me of a young Adrienne Barbeau though. 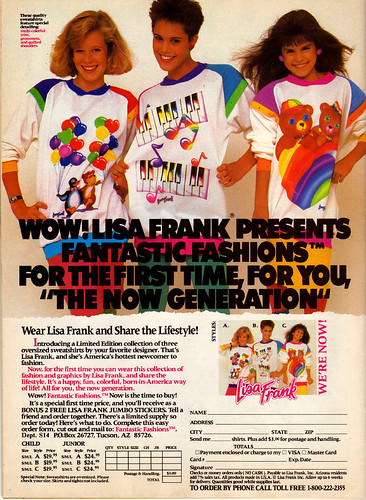 So that wraps up my coverage of the now defunct Stickers magazine. Issues do pop up on eBay from time to time, but they sell for outrageous prices, and I’ll be honest, I think two issues is enough for me. That is unless anyone out there wants to share scans of issues that you might have in your own collections on Peel Here. No? Eh, oh well.

Next week, I think I’ll take a look at my meager collection of G.I. Joe stickers seeing as how I’m currently obsessing over the new toys and all.