Well, I was a lazy bum last night and I didn’t fix up the screen shots from episode six of the Dungeons and Dragons cartoon, so instead of another installment of Cartoon Commentary!, I’ll be throwing up another Essential Hostess Ads post. C’est la vie. This week it’ll be the Essential Marvel Hostess Ads Vol. 3, Part 1: Twinkies.

Spiderman and the Kidnap Caper 1975 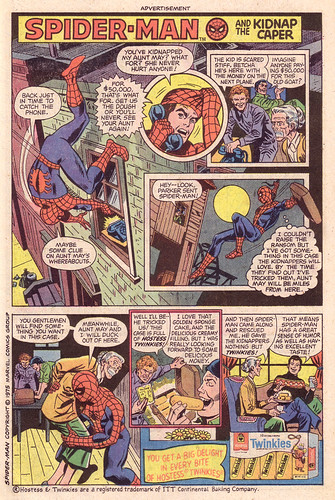 Wow, this Spiderman ad from 1975 almost comes off pretty normal. I mean there must be at least two dozen sitcoms with this exact same plot; loved one kidnapped, hero must scramble together money but can’t find enough, substitutes snack of choice (or stacks of copy paper, phone books, etc.) in briefcase to distract the kidnapper. Classic sitcom. Or bad movie. One of the two. Also, for once the villains seem kind of conflicted about the whole thing, which is a nice change of pace (even though this is one of the first Marvel Hostess ads.) 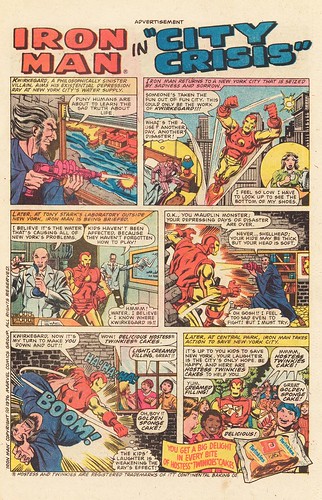 Now that I’m really thinking about it, I believe that if there are going to be any Hostess Comic Book ads that stand the test of time it will undoubtedly be the nutty schizo ones. Like Thor vs. The Ding a Ling Family, Spiderman in Legal Eagle, Penguin in the Cuckoo Cuckoos, or Batman in the Whole World is Upside Down, Iron Man in City Crisis is perfectly insane, as insane in fact as heroes fighting crime with pastries (even if those pastries have no recognizable expiration date.) Kwirkegard is the perfect Hostess Villain, with an awesome plan; I mean who else but good ‘ol Kwirkegard would think to existentially poison New York’s drinking water with sadness? That’s brilliant! The author of this comic gets an extra five points in my book for using the word existential, as well as making a loose reference to the Danish philosopher Kierkegaard, in…a…freaking…Hostess Twinkie ad no less.

I also love how secondary the Twinkies are; they’re included less to foil Kwirkegard’s plot than to help the children of the city bring back hope and happiness to everyone through their laughter, their sticky, gummed up with half chewed Twinkie laughter, which we all know is the best medicine. Why can’t all the Hostess ads be like this? 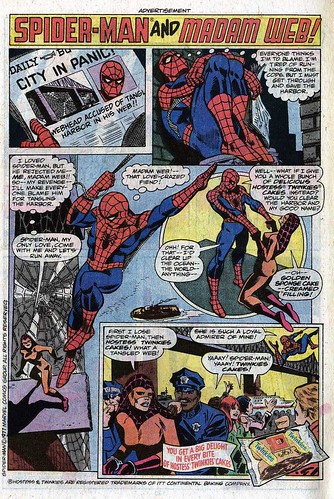 I have to admit that this ad is pretty fun too, though not as crazy as the last one. I love the disheartened Peter pepping it up with smarminess just long enough to use make Madam Web do his job for him (even though she did create the whole mess.) Hell, I think if I were Peter, I’d of given her the Twinkies and sent her off to 3rd world countries to do all of the cleaning up she eluded to. Damn, he could have introduced the work to a new Mother Teresa, a saint that can spin a mean web, and if you’ve got a Twinkie or two and about fifteen minutes, I’m sure there’s a lot more she’d do for you as well.

Spiderman in the Spiderman and the Fly 1977 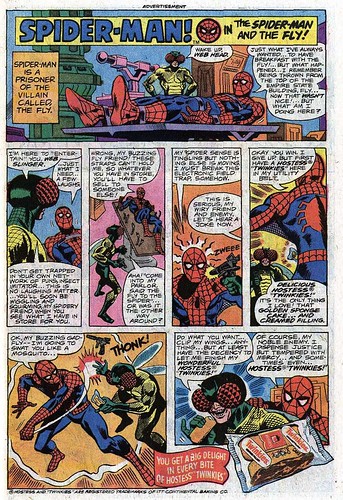 This comic, though pointlessly wordy and well pointless, is tops in my book for introducing me to the phrase, “I dispense justice, sometimes tempered with Twinkies!” By the way, did the writer just copy and paste the Hostess references into this ad, ’cause he sure does make ‘Twinkie’ plural in odd places. I think I might have to start referring to my single Twinkies, as Twinkies regardless. At least it’ll be funny to me.

Iron Man in an Irresistible Force 1978 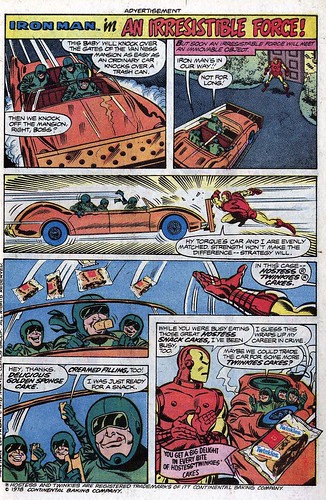 It’s pretty sad when a car outfitted with a sheet of metal on the front is an even match for Iron Man. Maybe that’s why he started drinking…

Captain America and the Time Warp 1978 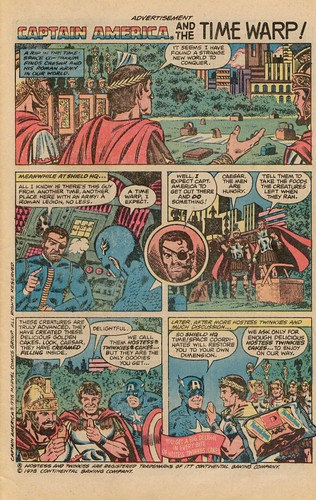 Okay, what did I lean from this comic, hmmm? Well, for starters that the writer is utterly bewildered by the concept of time travel. Do you really think that Caesar would think our future world was populated by ‘creatures’? If he did would he bother eating whatever was left in all those picnic baskets? Actually now that I’m on that, why were there so many people in the park with baskets full of Twinkies? I mean, that’s a little weird right? It’s funny how pushy Fury can get when he’s got a bunch of Romans in the park eating Twinkies, I mean he could have asked Cap a little nicer. I wonder what was shared, “much discussion” wise between Cap and Caesar? I wonder if Cap tried to make him beware the ides of March?

Spiderman Puts Himself in the Picture 1978 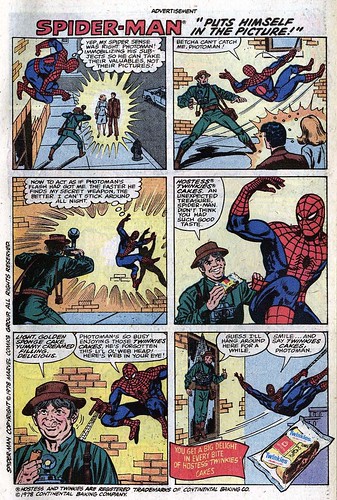 Okay, I apologize in advance for this, but this ad is screaming for some ass jokes. Well, two ass jokes. Okay, first ass joke (well more of an ass question really): Why did Photoman reach into Peter’s pants, and when he did, why did he pull out what must have been a seriously warm and squished pack of ass Twinkies? Sigh. Okay, ass reference number the second: When Peter squirts his webbing at Photoman and says, “Here’s web in your eye…”, is he referring to Photoman’s brown eye? ‘Cause that webbing is no where near his eyes. What an ass-er-iffic Hostess ad.

Thor meets a Glutton for Gold 1978 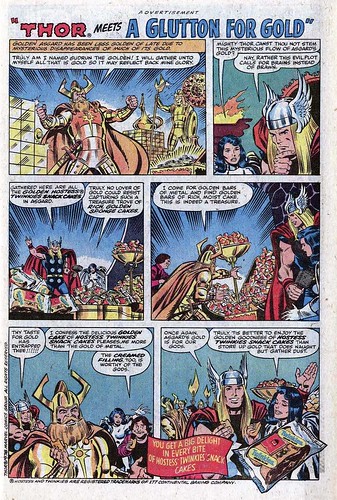 If it’s better to enjoy the golden goodness of Hostess Twinkies snack cakes than storing up gold that does naught but gather dust, why did they even care that the actual gold was gone? Greedy bastards. Hey, I thought the trademarked heroes weren’t supposed to be seen eating the damn Twinkies? 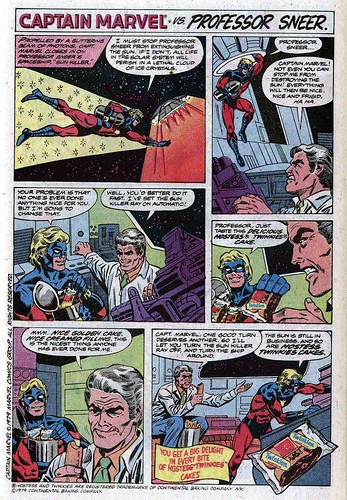 Oh man, that ad is just boring. Boring and sad really. I mean, what kind of a hero is Captain Marvel if he needs to basically beg a villain to eat his tasty Twinkie in order to stop his dastardly villainy. Sad, sad, sad. And Boring.

Mr. Fantastic in a Passion for Gold 1979 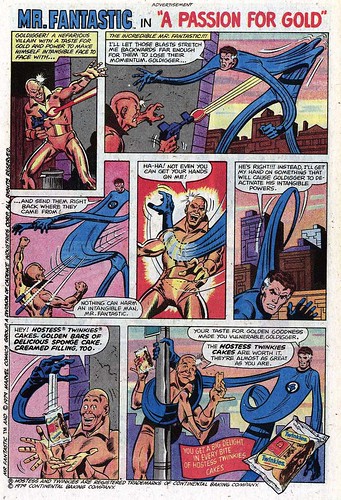 Is it just me or did Reed reach across the city and steal a pack of Twinkies to distract that villain? Man, there’s not much to this ad either. I miss Kwirkegard. Now he would have posed a much more interesting problem to Mr. Richards, like he would have devised a ray that could distract every one in the city by making them all of a sudden hear a tree falling in a forest they couldn’t see. Then he’d steal all the Twinkies and impregnate all the city’s women with sadness and dispair. Or something more interesting than becoming selectively intangible, only then to be defeated by a pack of Twinkies that, for some reason, caused him to lose his selective intangibility. Pshaw.

Putting the banana in the Batman…

Peel Here #108, These stickers are Maniacal