I wonder if they’ll still call him Satan?

Well, I broke down and opened my new Storm Shadow 25th Anniversary G.I. Joe figure. I just needed to let him out to get some air and, well, play with him. Keeping figures in the package is just not in my blood or something. The rest of the figures are up on the wall next to my computer for inspiration, but Storm Shadow is standing atop my tower keeping an army of cute little chub Transformers at bay. Since I tore off the plastic bubble, I thought I’d take a minute to scan in the card to show a little more detail on the packaging for these new figures and how faithful they are to the original G.I. Joe packs. 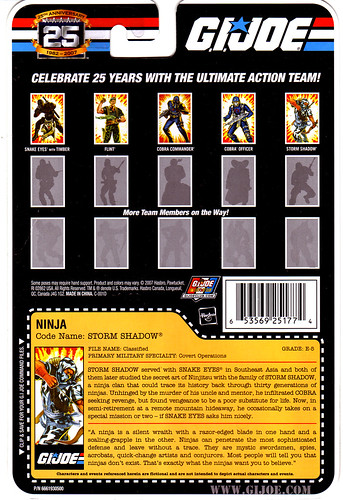 I’d mentioned in a previous post about the upcoming figure portion on the back, with boxes that are grayed out and reduced to silhouettes. Here you can see what’s coming up based on the character’s outline, 8 of which I was surprised how easily I could recall who they were. On the top row, from left to right, you have Beach Head, Lady Jaye, Buzzer, Sepentor, and a basic Cobra Trooper (but will he have a black or red mask covering his mouth?) The next row was a little trickier, for one because the silhouettes were a lot fainter, but also because a couple threw me a little. From left to right we have Firefly, Red Ninja, Stalker, Shipwreck, and Zartan.

I had a little trouble with Stalker as I never had him as a kid and I wasn’t familiar with his packaging art, and as I mentioned before I was totally clueless to who the Red Ninja was as I didn’t remember anyone besides Storm Shadow with package art depicting a bow. At first, based on photos taken at the San Diego Comic Con, my friend Daniel and I figured that it was probably another version of Storm Shadow, in his get up from the Valor Vs. Venom cartoon, but in the comments on my last post I was corrected by a few people that it was going to be a Red Ninja (btw, thanks for the picture link Hoov.) As you can see in this I-Mockery article, as well as on YoJoe.com, that there was indeed a Red Ninja called Satan back in the 80s, though it was most certainly only released outside of the US (in Argentina I believe), but regardless, there’s the art that matches the silhouette. 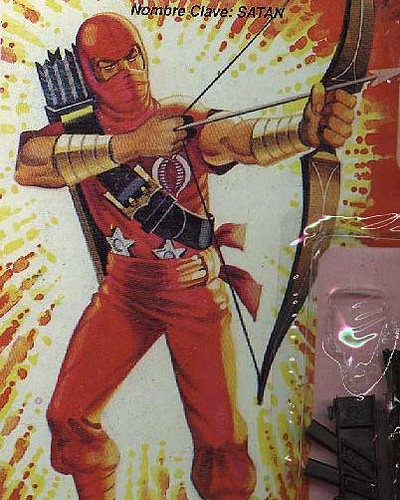 Finally, here’s a close-up of the artwork from the front of the packaging. Just can’t say enough great things about this.

I still haven’t found any 5-packs on store shelves, but I’m sure they’ll pop up sooner or later.

Peel Here #58, Another quick one before the holiday…

IT’S ALIVE! Branded gears back up for the 2014 Countdown to Halloween