Peel Here #40, the most powerful stickers in the universe!

I think I’ll do the proposed stickers magazine column next week and instead take a look at a bunch of He-Man and the Masters of the Universe stickers this week. I have a lot of really fond and vivid memories of the time I spent immersed in the He-Man universe, in particular moments when I received a lot of the figures for the first time. The whole Masters of the Universe craze seems kind of odd to me when I look back on it, especially after reading the crazy book Mastering the Universe by Roger Sweet (the man who created the He-Man toy line and who is very bitter years later), as the entire merchandising engine was so well tuned that it completely changed the face of toy marketing and cartoons for years to come. Not only did it open the door for more adventure and (for lack of a better term) violence to come back into cartoons, it also introduced the idea of syndicated cartoons that were beamed into the home on a daily basis instead of the more normal Saturday morning.

I wasn’t even aware of the whole thing (I mean I was only five) until my mother surprised me one day with a set of He-Man and Skeletor figures, and the next thing I knew everyone had He-Man toys and we were all glued to the TV living out the adventures with Adam, Teela, Man-At-Arms, and the Sorceress against the villainy of Skeletor, Beastman, Evil Lynn and the rest of the crazy evil henchmen. I never really had much besides the figures in terms of the merchandising that followed with the toys; though I’m surprised I didn’t have some of these stickers when I was younger as it was during my prime sticker-collecting phase.

Well first up we have some puffy stickers from 1982, which were distributed by Gordy Intl.

I believe there were at least three other packages of puffy stickers in this series though I’m not sure exactly which other characters made appearances. It thought these were kind of weird for the little sort of throw away stickers like the shield and the head of one of the air sled things, but I guess more stickers, even filler, is better than less stickers. These are also based on either the art from the comics that came with each figure or some other comic style art as it seems to be pre-cartoon seeing as how Man-At-Arms is sans moustache and Teela is sporting her Sepentor-like viper headgear. This is actually a pretty cool package for me to have found as it contains most of my favorite characters (only really missing Trap Jaw and Evil Lynn.) 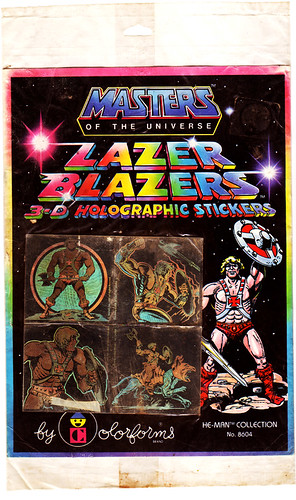 This next set of stickers is yet another example of the awesome holographic Colorforms Lazer Blazers stickers, this time featuring He-Man from 1983. There were at least three sets of these Masters of the Universe Lazer Blazers, as I also have the Skeletor set below and I’ve seen a set that focused on Beast Man as well. I’m not sure if there were any other produced, but it stands to reason that there was possibly one more set featuring one of the heroes, probably either Man-At-Arms or Ram Man to sort of even things out. 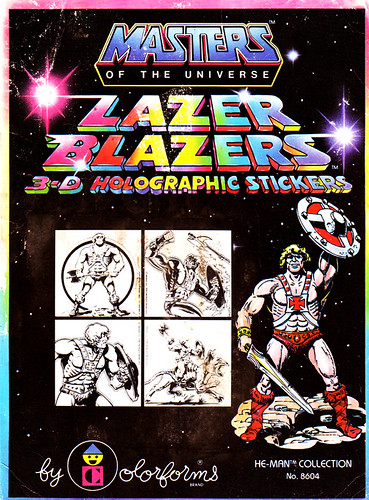 From the close-up on the stickers below you can see that the top right sticker almost looks like part of a bigger picture, what with the little sword tip and axe swinging in frame. Well if you look down at the Skeletor stickers it almost appears as if the sister sticker is also located on the top right, as Skeletor’s sword is missing a tip and the style looks similar. Unfortunately, the two images don’t line up properly, well unless they’re lopsided and not even that is. I’m wondering if the same artist worked on both of these sets and did two drawings that he just sorted of eyed and hoped would come together or if these are taken from another source that had the images paired up but not connected (which judging from the similar set of Transformers Lazer Blazers which had art transferred from a coloring book it’s a possibility.) 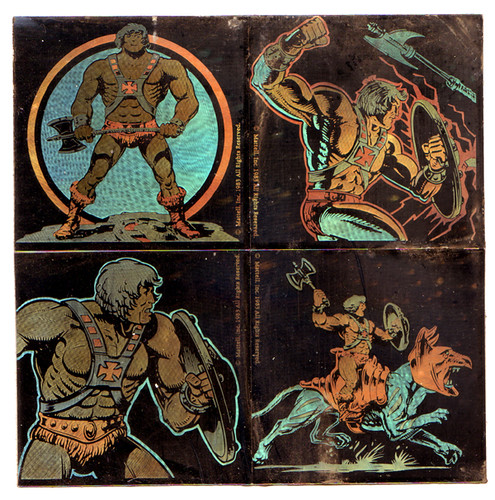 I thought it was kind of weird that the mock-up or design department chose to have a Castle Greyskull sticker in with the Skeletor set, but then again, I guess I really don’t think that these people cared all that much either (it’s just my childlike nerd side showing through that I even care.) 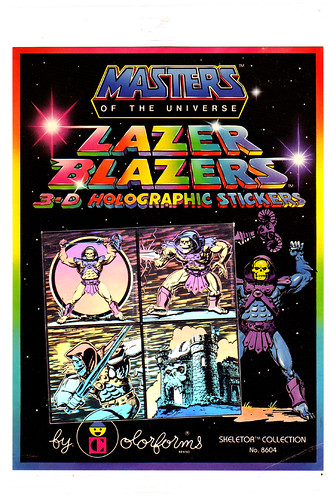 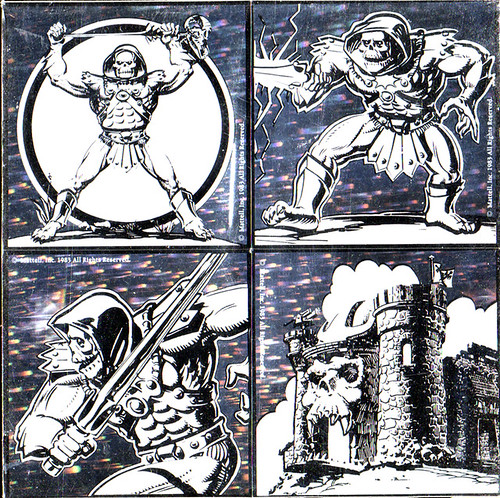 Rounding out this Peel Here column is the set of Topps He-Man sticker cards from 1984. There were 21 different stickers in this set, all of which had art that once again I believe were probably taken from either the mini-comics or story books that were done at the time. 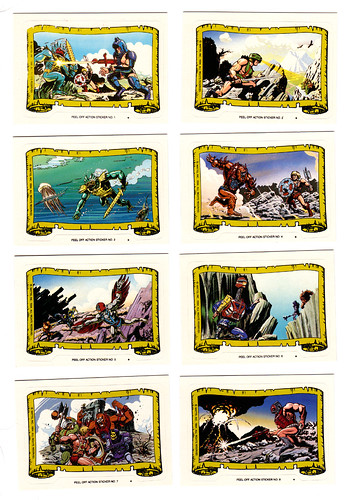 Like most Topps sticker card sets, these also featured poster puzzle backs, enough of which to make two separate posters, though in actuality since there were only 21 cards in the set you needed to get a double of one of the basic He-Man stickers which has two different puzzle pieces on it’s back so you could complete both puzzles. 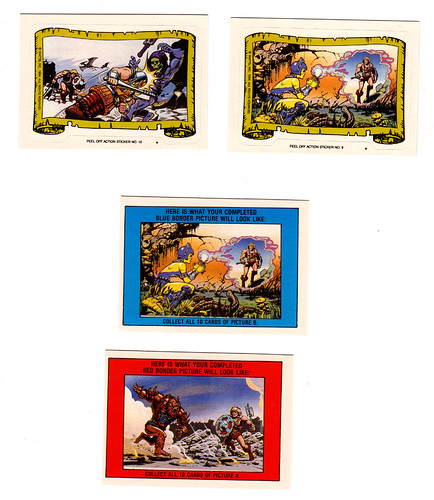 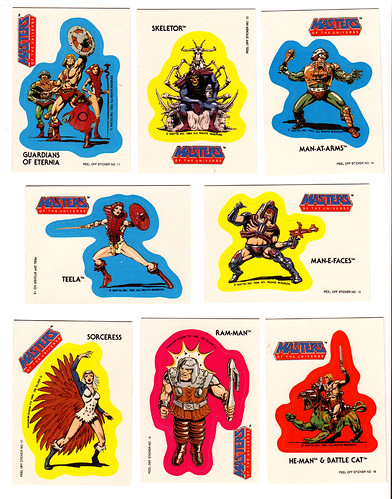 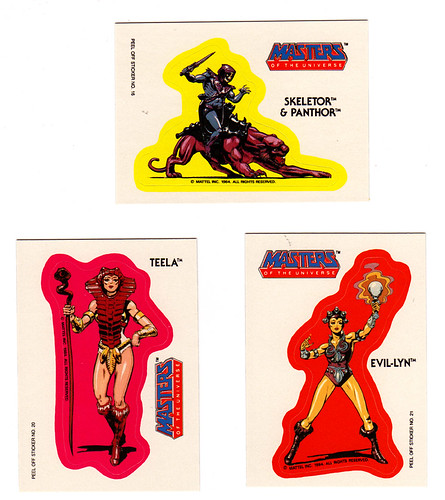 One of the small things I noticed with one of the cards was that who ever prepared these to be photographed (or however they did the printing process back in ’84) left in an area that was taped down on the original art. This really shows up on the enlarged card back poster version of the picture…

I thought it was kind of cool that something like this slipped through the cracks as once again it reaffirms my love of all the subtle details, which show that art or fantasy is in a real tangible form. It’s like that somewhere in the back of my brain I know that the artwork is on someone’s wall or stuffed into a binder or something, which is weirdly comforting to me, whereas if it were obviously done completely on a computer it would sort of feel kind of hollow or fake. Actually I don’t ever really think about this stuff unless I notice the details that ground something in reality (that is unless it’s CGI in a movie in which case I’m more than well aware of it.) 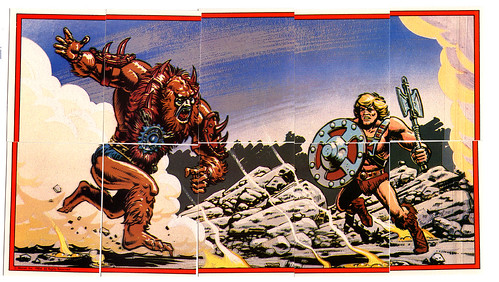 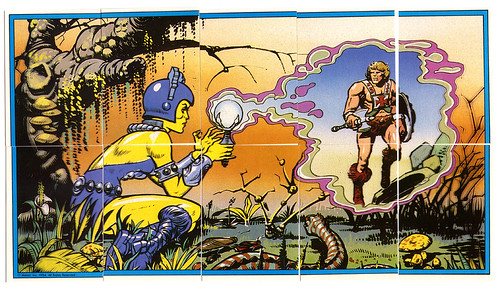 Next week I’ll probably get to that issue of Stickers Magazine, bit you never know…

The Repo Man has entered The Grid!