So jumping back into Dungeons and Dragons today, we’ll take a look at the second episode which first aired on September 24th, 1983 and was titled The Eye of the Beholder. 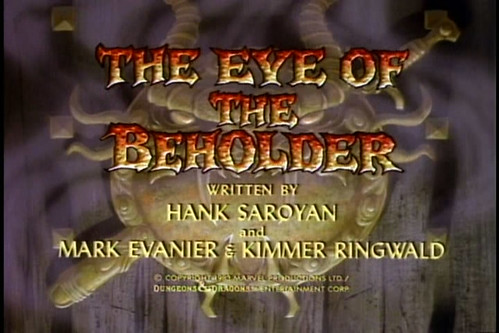 This episode was co-written by Mark Evanier (who was providing his last bit of input into the series as he did not stay on after the initial launch of the show), with help from Hank Saroyan, who also served as the Story Editor and the Voice Director on the cartoon, and Kimmer Ringwald, who is probably most known for his producorial (yeah I know that’s not a word, but I like it anyway) work on the Baywatch series. This is also the only episode credited to either Saroyan or Ringwald, though I’m sure Saroyan had plenty of input on further episodes since he was a Story Editor.

In this episode, the gang meets a wandering knight, Sir John, who boasts of great deeds though in reality he’s a coward grasping for his last chance at being an honorable knight. The kids are sent by Dungeon Master to find a creature called the Beholder, who when defeated will provide a portal back to their home-world, so they enlist the help of Sir John, who has some dubious ulterior motives of his own.

This episode sets the tone for the majority of the series by opening with a bang as the kids are immediately fleeing for their lives as a giant multicolored scorpion chases after them (after being woken by a annoyingly curious Uni.) As in a lot of the future episodes openings, the gang chooses to flee instead of holding their ground to fight, which makes me wonder if this is rooted in story structure or pressure from parents groups. It smacks of the Scooby Doo syndrome, just will less bubblegum pop music and much larger creatures.

Very soon we’re also introduced to the obligatory dragon for this episode, an imposing bipedal blue dragon that seems to be more interested in the scorpion than the kids. 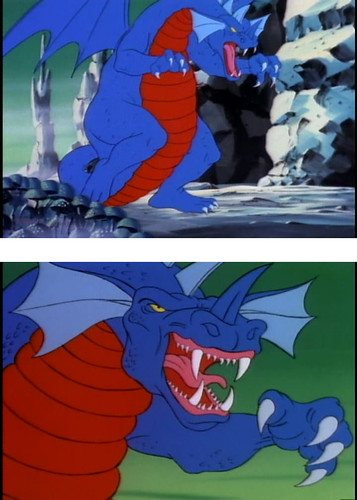 In the scuffle we’re also introduced to Sir John who is obviously a coward as he curls up into a ball, butt in the air, hiding like an ostrich from the two creatures. If you watch closely there is a quick paint error in the animation as John stands up and brushes himself off, his glove/gauntlets seem to disappear as they become flesh colored for a second. 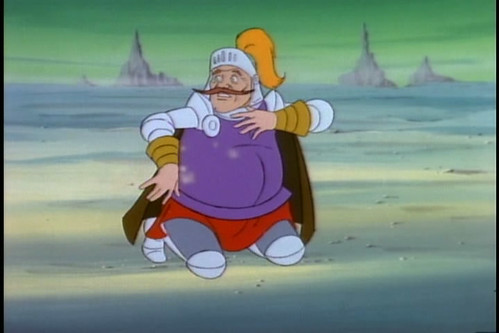 There’s another error, this time in the photographing of a series of cels as the gang is walking through a field of mushrooms. The bottom right of the screen shows that the cels were shifted enough so that Diana’s legs disappear and you can see the edge of the frame. 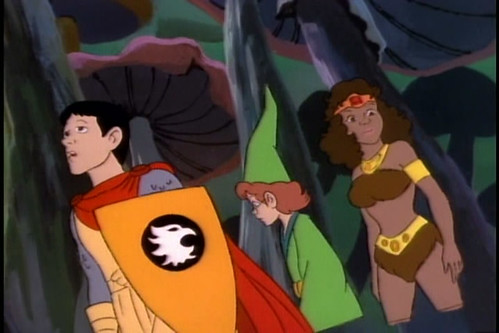 This episode is jam packed with various creatures and background characters. Besides the giant attacking dragon and scorpion in the beginning, there are also a group of slug/snail creatures, the eventual Beholder (which is taken from actual D&D mythology), and an entire town of people that Sir John is supposed to be defending.

Once again, when confronted with the slug/snail creatures the gang chooses not to fight, though they attempt to parry and block against the monsters’ assaults. It’s almost a theme for this episode as at every turn, when faced with danger, the group is written almost as victims for Sir John to try and save. Unfortunately, because he’s a coward, or trips into saving the gang, it sort of comes off as weird and unbalanced, especially later in the series as the group whole heartedly takes on the like of Venger or Tiamat without batting an eyelid. I think part of this is due to the series being new, and as I’ve mentioned before, I have a hunch that there was possibly pressure to limit the aggression and violence of the main characters. 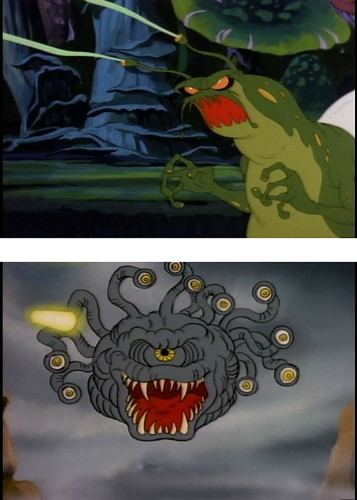 This non-attacking theme is carried on through the battle with the Beholder as the gang blocks, parries or ducks for cover. By this point I was really getting tired of all this running and hiding, and it really began to feel like the characters were acting more like pawns of the writers than characters. On a separate note, the Beholder in this episode is kind of interesting in that it’s quite different from how they’re portrayed I the D&D role-playing game, at least according to wiki. I’ve never been fond of this sort of flying blob with eyes type of creature, but they must have been popular as they pop up in other places like the Doom computer games, as well as in Big Trouble in Little China (and to an extent Slimer from Ghostbusters.) 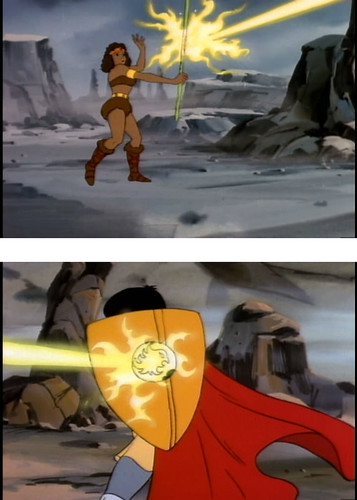 Though I didn’t really care for this episode all that much, I really liked the scene between Sir John and Venger (who is holding John’s son hostage to get him to lead the kids to the Beholder.) After John dumps the gang off to their doom he meets back up with Venger who is evidently an evil villain who keeps his word as he returns John’s son to him with no strings attached. It was rather refreshing to see a scene play out like this since this situation typically turns out sour for the person who ‘sells their soul’ as the villain typically doesn’t keep their end of the bargin. I think this is one of the reasons why I really dig Venger as a villain, and later on it’s moments like this that really show how well developed of a character he is.

This episode also marks the first time when the gang actually manages to open a window home to their own world, though it also sets up the pattern of having them make the hard choice to stay and help someone in the D&D realm, sacrificing their chance to get back. There are actually two reasons why the gang decides to stay in this scene, the first being Uni. Bobby, who is basically Uni’s guardian, doesn’t want to leave him behind even though I believe it’s sort of accepted that Uni wouldn’t be able to survive in their world. This is sort of a weird situation because at the end of the day it isn’t going to change as long as they keep the annoying little unicorn around as a mascot/pet. The second reason the kids decide to stay is to help Sir John, who in the end came back to rescue them, and is now being attacked by Venger.

Once again we see the kids, on the offense and to the rescue even, not really fighting Venger. In fact the only time he is even fazed is when a bolt he shot at Eric is reflected back upon him. To top it all off, he’s dispatched by a mysterious red bolt of energy that more or less remains unexplained, though we get the idea in the end that it came from Dungeon Master, who is laughing himself silly where the group can’t see him. This just raises the question again about how involved is DM, and what is he capable of doing interference-wise.

Since the show is based on a table top role-playing game I’d have to say that Dungeon Master should really only be the type of character that describes settings and gives hints, like the real world counter part he’s acting as, though it is common for the Dungeon Master/Game Master/Story Teller to play a character in their own campaigns, which has always sort of bugged me as a player. As we’ll see in the next few episodes this dichotomy is addressed further, though later on, in the 2nd and 3rd seasons DM takes on a more classic guide-like position, stepping back from the group a little. Again, I think this is more of a stumbling at the beginning of the series as the editors and writers are feeling their way around the world they’re creating. 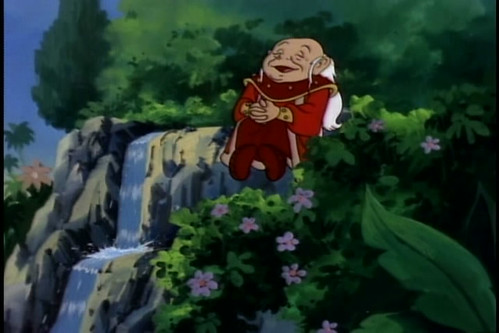 Tomorrow, the Hall of Bones.