I tell ya, I think I’ve discovered my perfect stress release valve in the form of these Hostess comic ads from the 70s and 80s. There’s something about the incredible inanity of these plots and familiar fruit pie fixes that just puts me at ease. Sure I’m still weak after being sick, sure work has piled up both at home and on the job, but it all flakes away like the crust of a good fruit pie, leaving behind the sweet peachy center of calmness and slight hilarity as I flip through ads featuring the who’s who of the Marvel universe duking it out with miscellaneous evil doers who almost always have a soft spot for Hostess snacks. So join me for a second as I take a detour from work and obligation with another round of ads in this, the Essential Marvel Hostess Ads Vol. 2, Part 2: Fruit Pies 1980-1981. 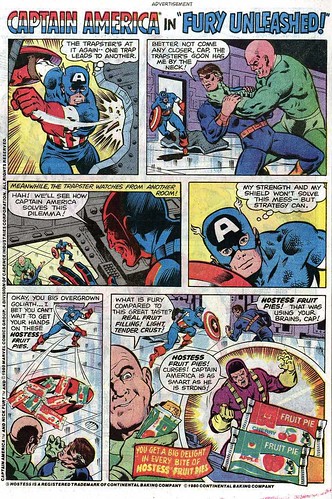 This has to be the quintessential Hostess comic ad; one that I’m surprised wasn’t the template for every other ad that came before or after. It’s so simple. Open comic with hero doing something heroic. Snap to the second panel where there is a problem. Slide into the third panel in which we see a villain wringing his hands in evil triumph. Follow this with the forth panel and the hero’s revelation (which should always be fruit pie centric.) Show the hero fulfilling his plan in the fifth panel. End on hero jubilant in his success with an insert of a pissed off villain (though there should always be the variant of the happy villain chowing down on a fruit pie just to spice things up every once in awhile.) Why aren’t they all this straight forward? 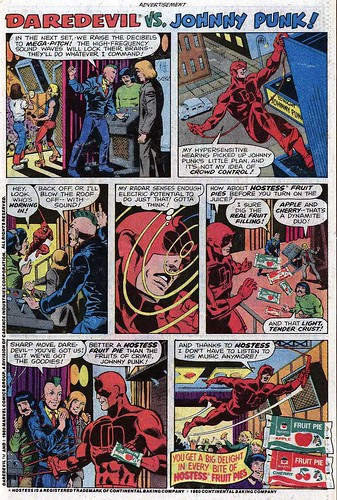 Talk about the death of punk in the 80s, sheesh. I guess you know a fad has truly filtered down through the masses and is over when it ends up in a comic book fruit pie ad (actually the bottom run is when it appears as the design on say diaper packaging, then it’s done.) So what sort of punk featured an acoustic guitar and a horn section? I guess I’m glad for taste’s sake that Daredevil horned in and stopped that dastardly bad music. I guess it’s kind of hard to write red-tights into a Hostess ad anyway, I mean there aren’t all that many acoustic angles you can take with fruit pies.

The Incredible Hulk vs. the Roller Disco Devils 1980 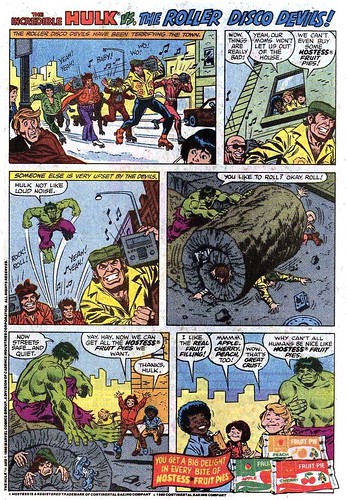 You know, if it’s not those dastardly punks, it’s the damn disco loving divas. Stupid roller skating hooligans. It looks to me like the artist started to draw the Hulk eating a fruit pie in that last panel, what with his mouth full and his hand in a slight grasping position, pinky out and all. Yet no sign of an actual fruit pie? I do believe that a stipulation of these ads is that the actual licensed characters can’t be depicted eating the flaky pies, so maybe the snack was removed before printing…

The Human Torch Saves the Valley 1980 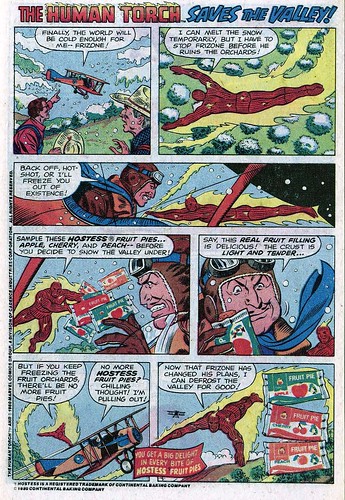 Wow, a Human Torch ad with no sexual innuendo? Crazy. The writer even managed to slip in some educational content by discussing the effect the villain’s scheme will have on the survival of fruit pies. Color me impressed. 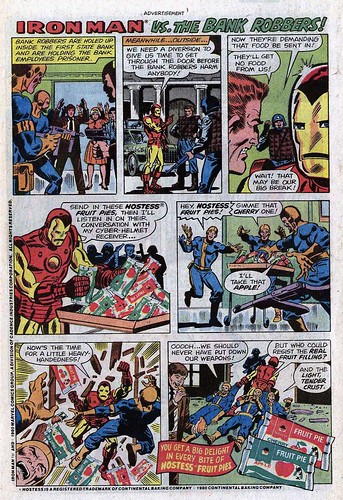 Man, where do I begin with this one? I guess I’ll start with the matching outfits those bank robbers pain stakingly picked out. So they have a keen sense of fashion. So, did it really matter that it was Hostess fruit pies that the cops sent in, I mean if it had been like a table full of Big Macs wouldn’t the obviously hungry bank robbers have had the same knee jerk reaction (like a seven year-old girl seeing a pony in a field on the side of the road)? Bah, I’m done with this one.

The Thing in Earthly Delights 1980 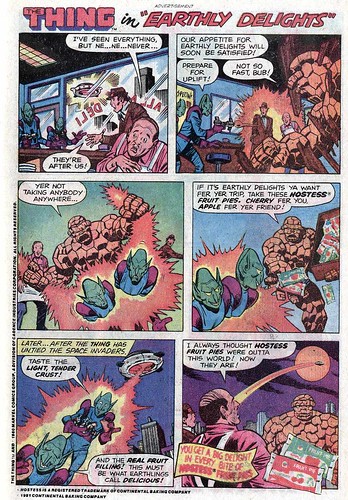 Wow, the thing can harness the power of uplifting rays and use it to tie up bad guys. Good to know, good to know. Kudos too, on setting this one in a diner so that it’s even reasonable that there was a Hostess fruit pie display lying around as opposed to the innumerable times the hero just happened to have thirty or so fruit pies in their pants. 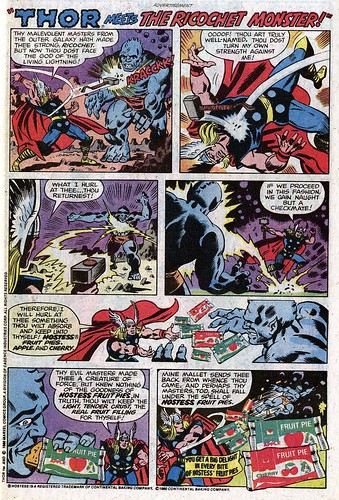 Dude, did Thor just give the Ricochet monster his hammer? I also love the panel with him getting bitch slapped by a returning Mjolnir. I don’t know why I think that’s funny.

Captain America in the Deciding Factor 1981 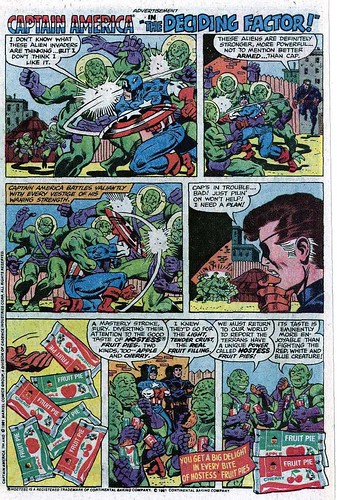 I think Fury sat by watching the carnage for a little too long. Maybe he was trying to teach Cap a lesson or something. By the by, Cap sure does find himself fighting a whole lot of nameless green fellas doesn’t he? 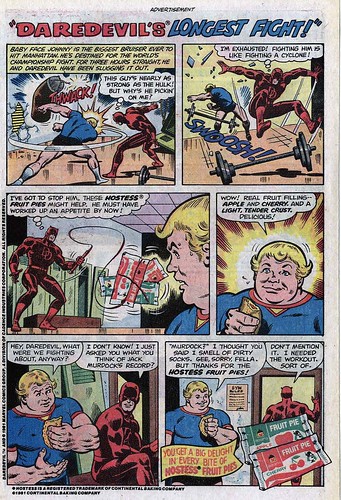 Oh….kay. Um, maybe this ad will get the award for the stupidest concept ever. Yup, just plain stupid.

Fantastic Four in Wonders of Nature 1981 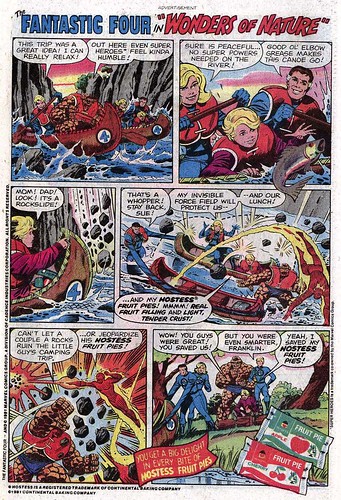 BY ALL MEANS NECESSARY SAVE THOSE DELICIOUS FRUIT PIES! Wow, the Fantastic Four sure do know how to over dramatize a situation don’t they, I mean considering that all they had to do was slide under the rocks protected by Sue’s force field. Sheesh.

The Hulk vs. the Phoomie Goonies 1981 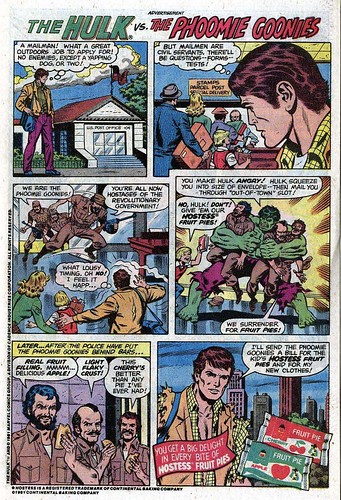 I can practically hear that kid crying as he begs the Hulk to exchange the revolutionaries’ lives for fruit pies. How funny would it have been if the comic would have ended after the second panel with Banner all of a sudden hulking out in the post office screaming “Hulk hate questions, forms, and tests!!!”

My Trap Jaws are Ver-Clampt…