I’m still trying to catch my breath after a nutty weekend full of video games, Dim Sum, and seeing the Simpsons movie, compounded by coming down with the flu on Monday and being in bed for two days straight. I won’t let the flu keep me from my regularly scheduled Peel Here column though, 102 temperature or not.

This week we’re going to take a look at another of those Golden Sticker Fun Books, this time though it’s inspired by a different cartoon, that weird and short lived plant versus machine action fest, Jayce and the Wheeled Warriors from 1985. This is another one of those cartoons that I have only a few memories of, most of which revolve around the theme song and opening credits sequence. It didn’t help that I never had any of the toys, and in fact I’ve only ever seen the toys once, briefly while at this one kid’s house, and most of that memory is blocked because his house scared the crap out of me. It was all large, dark, and creepy or anything, his mother just had a thing for clowns, so there were sad clown paintings, hobo clown figurines, and various other household clown accoutrements lying around that gave me the heebie jeebies. I didn’t want to be rude, but I made my best effort to avoid going to his house all that much least his mom snatch me up, stick me in a homemade well in their basement and threaten me with the hose again unless I apply the pancake make-up. Where was I going with that? Oh yeah, I’m not all that familiar with Jayce and the Wheeled Warriors.  I do have the one single 4-episode DVD that was released about five years ago though, and I’ve been meaning to watch it forever, so maybe this will get me to do that.

What I do remember is that the story didn’t seem to make a whole lot of sense to me. I mean why was this planet of flora so pissed off, to the extent that they’d turn into saw wielding vehicles of doom and destruction? Well, I guess that’s what Sticker Fun books like this are here for to teach us about plant anger and those that would prune back the likes of Saw Boss… 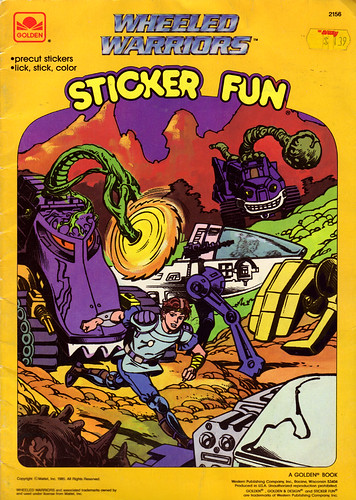 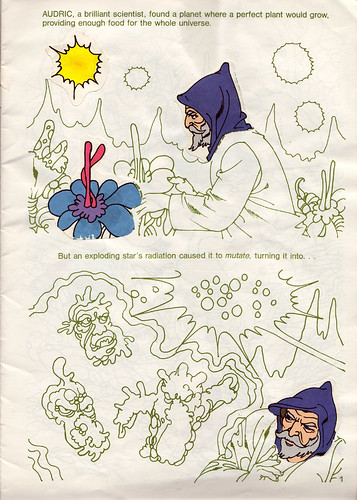 I’m telling you, did radiation ever do anything productive in the fiction multiverse? As far as I can tell it can only burn, mutate into hideous plant minivans, or turn you into a zombie. Hey I wonder if Saw Boss still has the ability to feed everyone in the universe, and if so does he choose not to because he’s evil, or because he’s now sentient and that would be just kind of weird to have like everyone everywhere suckle off of your plantness? 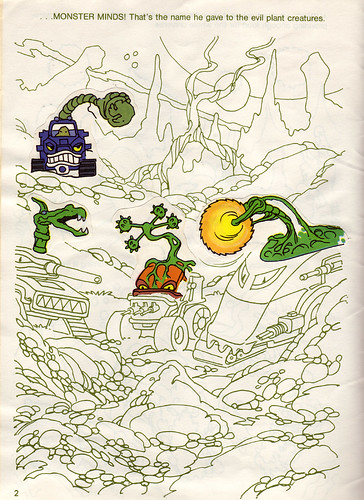 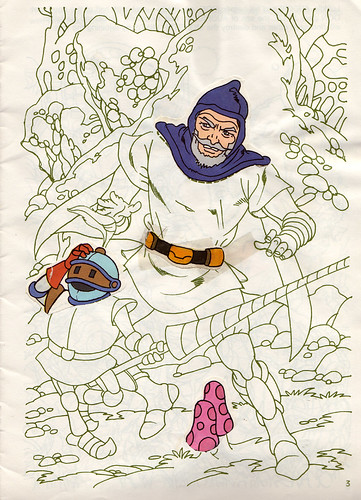 These Sticker Fun stamp stickers are so weird. On the above page for instance there are already three stickers providing a color guide for the main characters, but why did Golden choose to include the little mushroom duo sticker? I mean, that’s just sort of stifling the creativity of the kid that really wanted to color those yellow with blue dots. I mean, sure they could just discard the sticker, but then that’s just being wasteful. I wonder why made them choose the "stickers" they did? 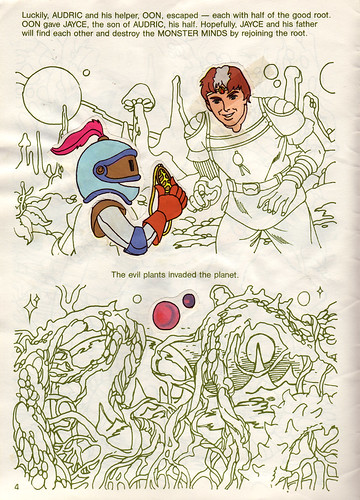 See that right there is why this cartoon failed. If Audric had the full good root capable of destroying the Monster Minds, why did he have to separate it into two and ship the other half across the universe, or where ever Jayce was playing, just to have him go on a quest to bring it right back to him? I think even a four year old could see right through a plot hole like that. 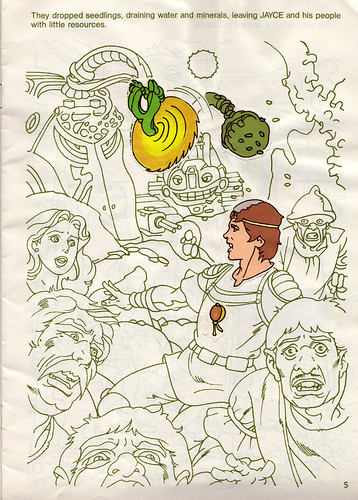 I bet the above page was fun to draw for the artist. I love the cut off guy on the bottom running for his life, very dramatic. 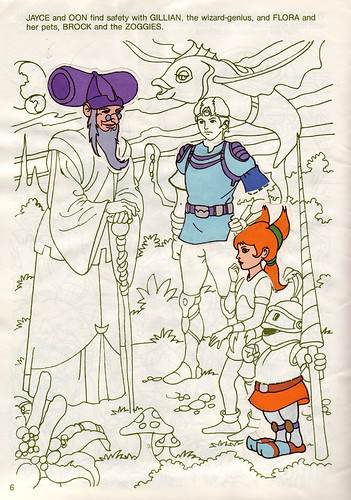 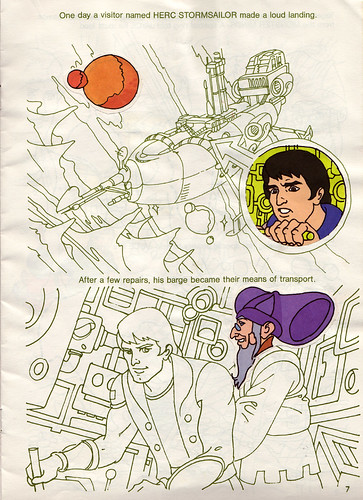 I’m beginning to think that a whole bunch of cartoons were seriously influenced by Star Wars in the 80s, I mean if Darth Vader were a radiated plant, this would almost be like plagiarism. 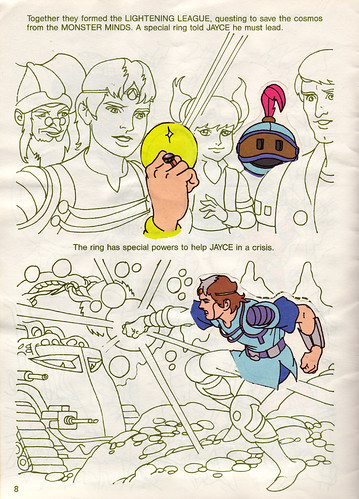 It might just be me, but I think having the half of the good root in the medallion tell Jayce that he should lead would sound a little bit more normal. I mean where does this odd talking ring come into play? I guess it all makes a lot more sense in the cartoon. 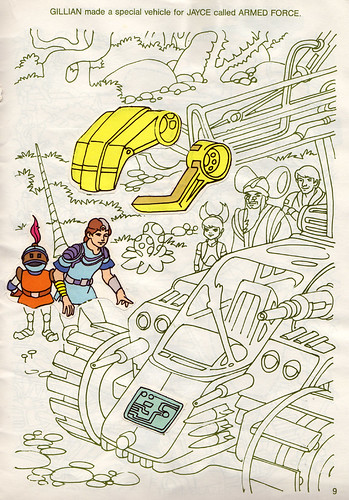 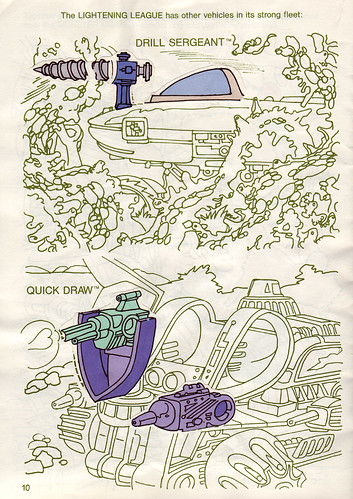 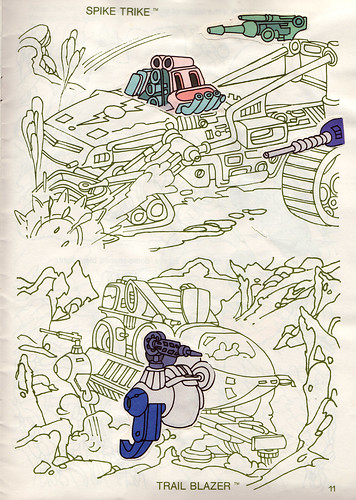 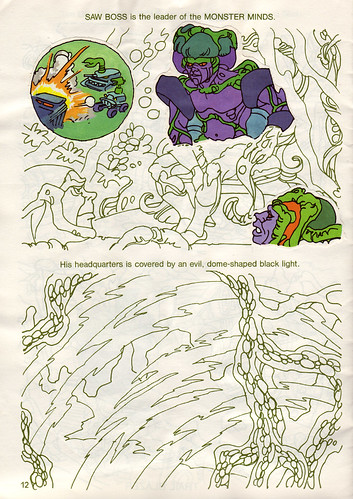 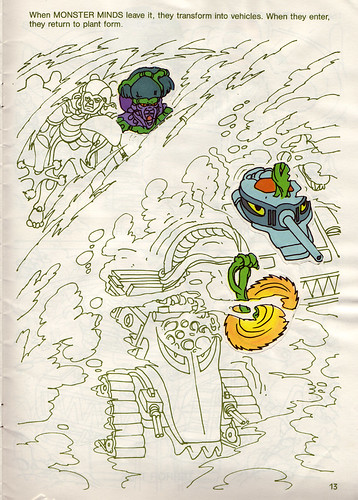 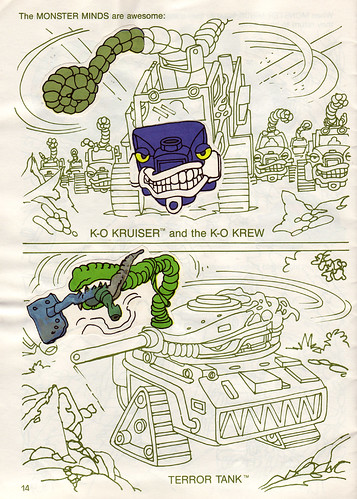 The Monster Minds are Awesome?!? Who wrote this book, Saw Boss? I love that K-O Kruiser has an entire look-a-like K-O Krew, much like Scourge and his Sweeps from the Transformers movie. Come to think of it, why wasn’t there a head Cobra trooper on G.I. Joe? Maybe Major Blood was, bus his brown outfit throws me off of the whole look-a-like thing. 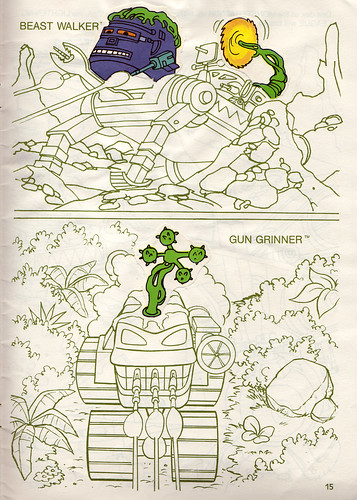 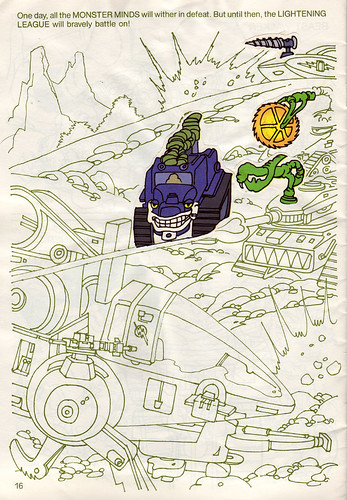 There’s something odd about the last line in this book. It’s sufficiently grammatically sound, but it still sounds like it’s contradicting itself. I think that first bit about the ‘Monster Minds withering one day’, that’s what’s throwing me off. I’m used to more dynamic statements like: "The evil Monster Minds will pwn the universe, though as long as the Lightening League can it will do it’s best to thwart them at every turn…" or something like that. I don’t know. 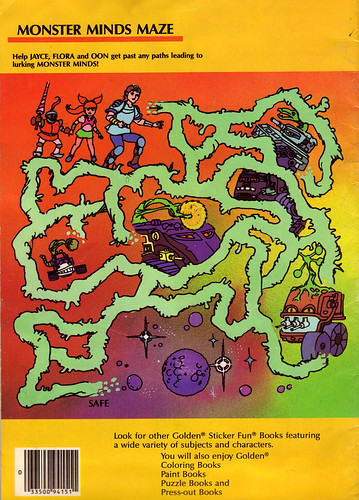 Next week on Peel Here I’ll take another dip into the collection of stickers and hopefully I’ll pull out a winner. Wait, what am I saying, as long as it’s paper, glue, and has some miscellaneous imagery from the 80s it’s always a winner.