Cartoon Commentary #1, A look at the Dungeons and Dragons cartoon…

I suppose I should start off this first Dungeons and Dragons Cartoon Commentary column by talking about where I was (nostalgia/memory-wise) right before I received this DVD set.  I guess this is sort of my first confessional about a basic lack of knowledge of the cartoons I grew up loving.  All I really remembered about this show was what the main characters (Hank, Eric, Diana, Sheila, Bobby, Presto, Dungeon Master, and Venger) looked like, the fact that it was a Marvel Productions cartoon (don’t know why that stuck with me), and that there was very little merchandising off of the show.  In fact it’s kind of weird that there was a toy line (produced by LJN) that was running concurrent to the cartoon that didn’t feature the main cartoon characters, only characters from the pen and paper game that were worked into the show (I’d only ever seen one set of German PVC figures that were molded off of the show characters at a convention in the 90s.)  I knew the basic plot, kids trapped in the D&D realm who couldn’t get home, and I had snippets of memories from a couple of episodes, in particular Quest of the Skeleton Warrior (I vividly remember Hank running up the disappearing stairs in the Lost Tower sequence.)

Add to this the fact that I’ve only ever played one actual session of the role playing game and hated it (I’ve gamed for years, but mainly using the Palladium and White Wolf systems), I feel like I’m pretty much a newbie to the whole cartoon experience, even though I remember it, I guess I don’t really remember it.  Heck, I’m not even all that fond of fantasy setting in books and movies, and all of this aside, I still have a very strong nostalgic sensation whenever I hear the audio to the show opening or see any stills from the animation.  It’s a very palatable and physical sensation that stirs, so there has to be something to this right?

So now that I have that confession out of the way, lets get into the show shall we?  As I stated above, Dungeon and Dragons was one of the shows produced by Marvel Productions, debuting in the fall of 1983.  Though Mark Evanier (who wrote both the series bible and the pilot episode over the course of a few days at the emergency behest of CBS) is often cited as the show’s creator, it was actually the brainchild of Dennis Marks (and also credited to Kevin Paul Coates in the end credits) who had been pitching the series under the title Swords and Sorcery (or something very similar.)  Evanier has some funny anecdotes about his introduction and involvement with the series on his blog, in which he mentions that he was hired to rework the concept after CBS picked it up the option to air the show.  Apparently the pitch, after passing through a lot of writer’s hands, had become quite unwieldy with way too many characters and ideas floating around.  Evanier said that it’s common for writers to want to add in the revision process and not delete any of the previous writers’ work.

Evanier cut away the excess, streamlining the concept into the 26 page series bible which introduced the main children that would go on to be in the show (Hank, Eric, Diana, Sheila, Bobby and Presto), as well as Bobby’s ‘pet’ unicorn Uni, Dungeon Master, the main villain Venger, and a red dragon named Rogull, which didn’t make it into the show and was replaced by the five headed dragon Tiamat.  He also outlined the idea of using the main title sequence as an opportunity to tell the origin of the gang’s entry into the realm of dungeons and dragons, most of which ends up as the final show’s credit sequence.  Here are the three pages out of the series bible that outline the main title sequence, some screen shots of the final credit sequence, and the opening title music so you can get an idea of what they were trying to achieve… 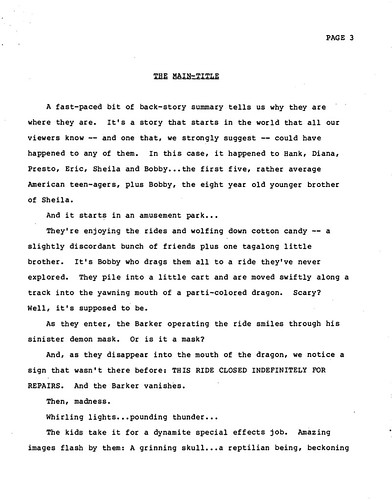 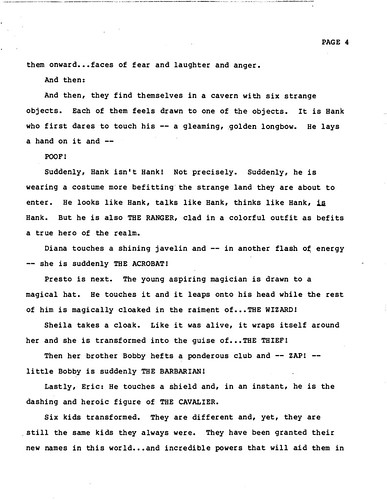 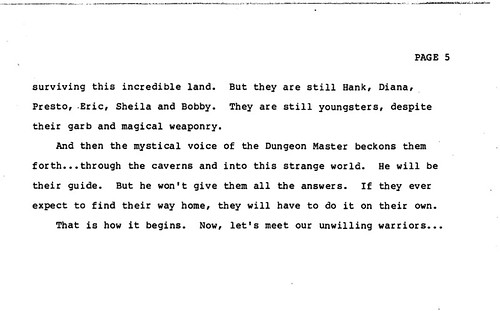 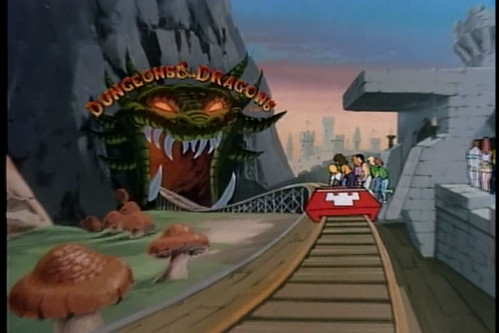 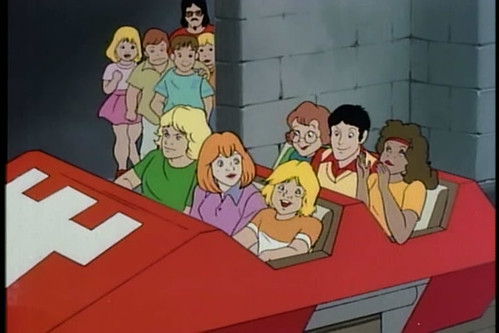 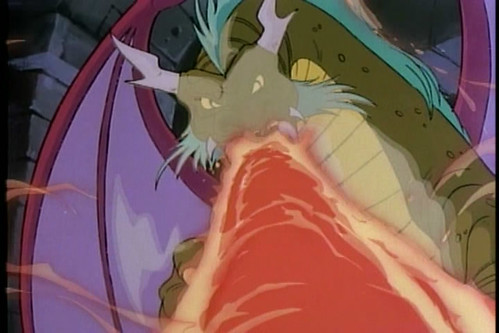 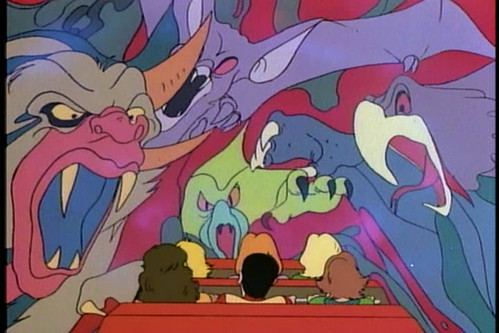 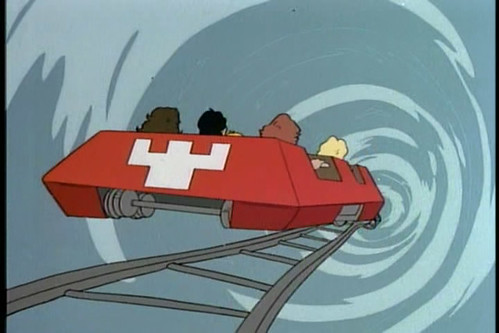 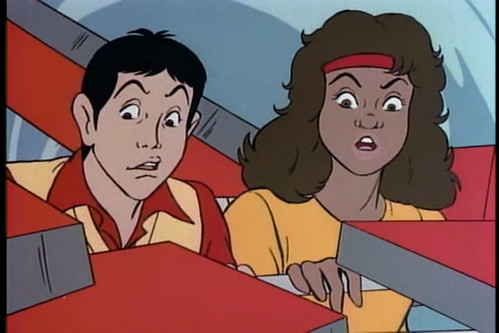 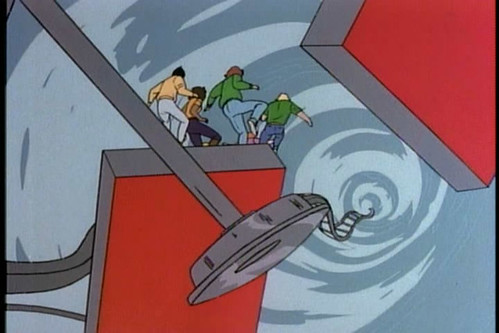 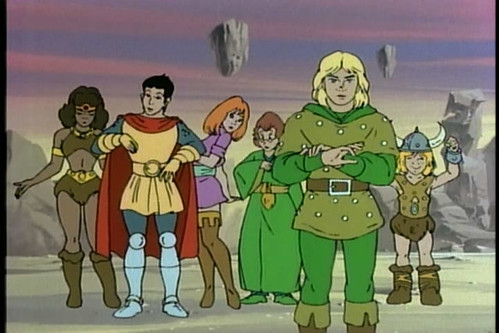 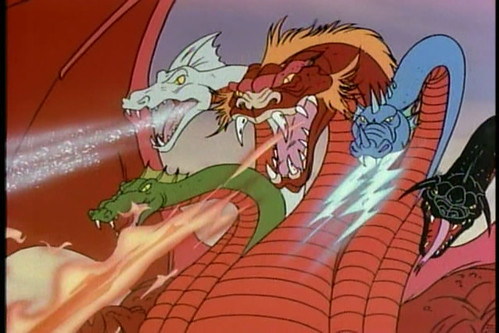 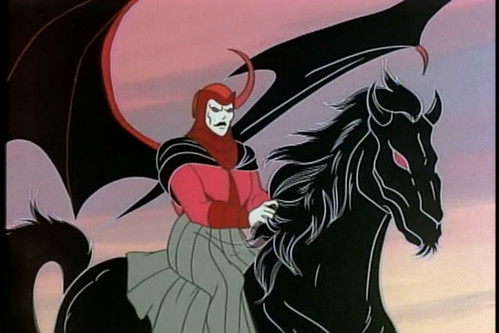 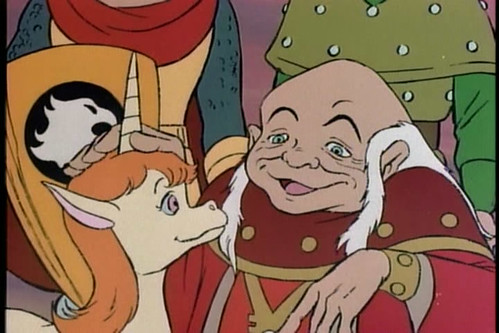 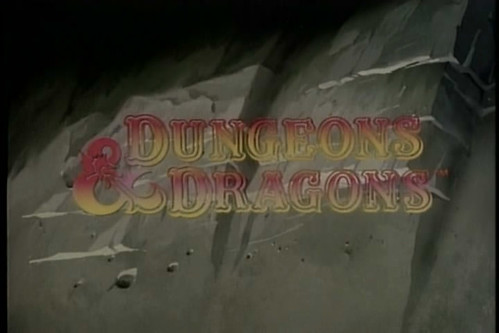 I would have liked to include the actual animated sequence, but so far I’ve been less than impressed by streaming video compression over the internet, so I guess I’ll stick with screen shots for now.

There were basically two main differences between the bible and the actual versions, things that I think would have added just a tad of great characterization and back-story, which were the introduction of (I’m assuming) Venger as the D&D ride’s barker (as well as the closed for repairs sign that would have been a nice touch) and a stronger connection between the kids and their weapons/items.  It would have been nice to see the kids approaching the items cautiously, with Hank reaching out first for the energy bow.  I think it was a very subtle way of assigning leadership, and marking Eric as sort of a coward.  Since the main title sequence is already filled to the brim with back-story, I can see that it must have been a choice between slowing it down a bit to add more characterization or speeding it up to set the tone for the action and adventure aspects, which is what they ultimately went with.  At the end of the day I’m sure the studio is much more concerned with tone over character, as one typically points more toward money (audience share and for sponsors.)  Either way I find it interesting that they chose to cram the origin into a 1-minute reel of animation as opposed to dedicating an episode to it.  In fact I think this is quite common for cartoons in general, especially in the 80s (some notable exceptions being Thundercats and Transformers.)

Another thing that sets this show apart from other 80s cartoons is the choice that Hank Saroyan, the story editor and voice director, and the producers made, which was to cast some established actors with familiar voices for the children.  I suppose it was to cash in on some recognizable voices that the audience might not actually recognize, but might subconsciously relate to.  The first person Saroyan sought out was his friend Willie Aames (who had made a splash on the drama 8 is Enough, and who went on to play Buddy on Charles in Charge, and Bibleman, cough, hack, um, yeah) as Hank, the Ranger. Aames suggested his 8 is Enough co-star Adam Rich, who was then cast as Presto, the Magician.  Saroyan had also previously worked on the animated version of Happy Days (in space no less) and really liked the energy that Donnie Most put into his performance as Ralph "Mouth", so they cast him as Eric, the Cavalier.  The rest of the cast was rounded out with a few veteran character and voice actors Sidney Miller as Dungeon Master, Bob Holt as Shadow Demon, Venger’s second in command, Peter Cullen (the voice of Optimus Prime in Transformers as well as many others) as Venger, and Frank Welker as Uni and Tiamat (most famous for voicing Fred on Scooby Doo, but he’s also worked on practically every other cartoon ever), as well as some newcomers, Tonia Gayle Smith as Diana the Acrobat, Katie Leigh as Sheila the Thief, and Teddy Field III (son of Ted Field II, director of Children’s Programming at CBS’s entertainment division, who is the first to mention that he had nothing to do with his son’s casting) as Bobby the Barbarian.

Next week on Cartoon Commentary! we’ll take a look at the first three episodes of the series.

Why didn’t they just name the leader Fluoride?

For me the 80s didn’t end with a whimper or a bang, but with a fake puking noise…