Do you like spicy food?  Have you ever found yourself standing in the grocery store trying to decide what to buy, but were perplexed by your choices because there were no spicy versions of the products you wanted to buy?  If so, than Frito Lay is going out of their way to make sure that this problem doesn’t affect you when you’re on the brink of making that all too important Cheetos purchase this summer.  They actually already offer most of their snack products in their patented Flamin’ Hot variety, which honestly is pretty hot (and this is coming from a guy who adds hot sauce to already spicy chili mind you.) 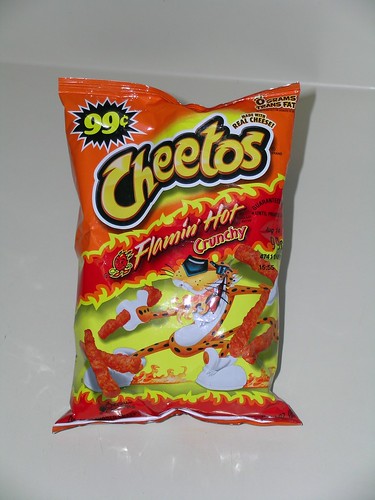 But this summer they are offering two addition levels of heat to their Cheetos line of products to make sure that every pallet can be satisfied.  When I was down in Florida visiting the family over July 4th weekend I noticed that the 7-Elevens around us were all carrying new Cheddar Jalapeno flavored Cheetos.  Being a big fan of Jalapeno flavored products and cheetahs wearing cowboy hats, I picked up a bag. 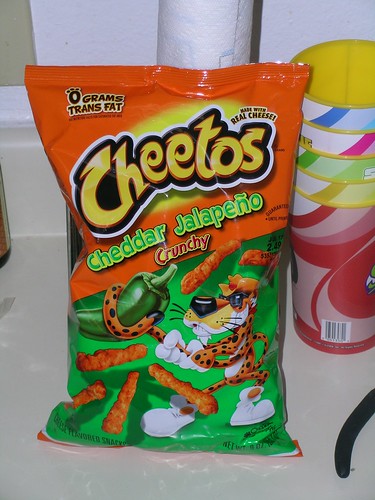 I actually liked them quite a bit though they were very tame on the heat level; mostly they just had a zing of Jalapeno flavor.  What do you call an individual cheeto?  It’s surely not a chip.  I guess it’s a fried corn puff.  Well I didn’t bother talking a picture of the actual fried corn puffs because they weren’t all that interesting, and only had a few speckles of green that were more or less hard to see.

Well, when I went into a gas station the other day I was bombarded by yet another new display of Cheetos, in yet another level of heat, XXtra Flamin’ Hot.  They were advertised as being twice as hot as normal the Flamin’ Hot variety, which actually kind of scared me a bit considering I don’t typically enjoy the normal hot ones seeing as they are more heat than flavor.  Though I love seriously spicy food, it’s not specifically for the heat, but for the flavor that tends to come with hot foods.  I guess I like the way peppers taste, and if you are more or less extracting the capsicum from them to add heat to other things it doesn’t interest me as much. 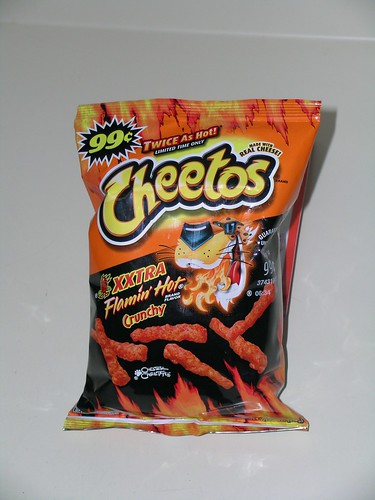 Well, taste buds be damned, I figured as long as they were claiming monumental levels of heat in their new Cheetos, it would have to be my duty to take them to task and perform my own little taste test.  I poured out the contents of the two bags of Flamin’ Hot Cheetos side by side to first compare the “redness” of the fried corn puffs… 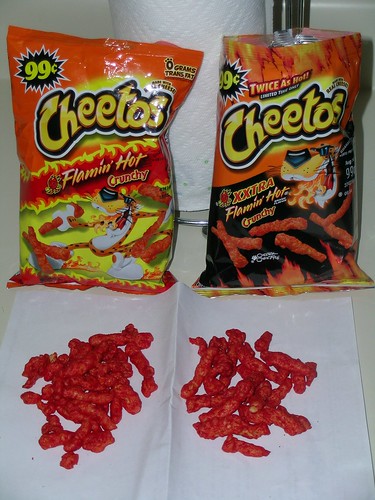 I then poured myself a glass of water and dove into each stack separately to try and see if my mouth and brain could handle the torture of such insane heat.  In the end, I’m convinced that this is one of the stupidest promotions ever as I couldn’t tell the difference in the Cheetos as all.  The XXtra hot variety looked and tasted exactly like the original with absolutely no discernable difference in the level of heat.  In fact, they both seemed tamer than I was expecting, I guess considering that I was preparing myself for all sorts of “oh my god my mouth is so hot” dancing, compounded by burn blisters, and the eventual development of tongue ulcers.  I barely needed to drink any water afterwards.

I guess if nothing else Frito Lay gets points for at least trying to provide too much choice, which is always favorable over no choice any day.

Being dumb is stupid…