Well, it’s time to dip back into the world of Hostess ads, this time we’ll be taking a look at some Marvel fruit pie ads from 1975-1979. 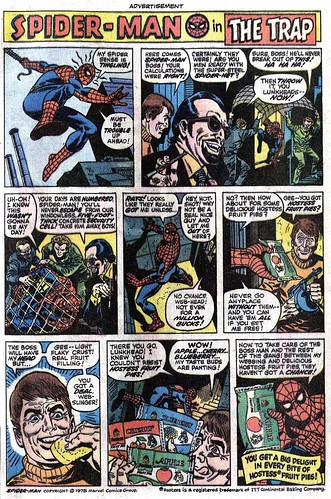 You know, I don’t want Peter to think I’m losing faith in him or anything, but Phil Spector and his crew seemed to capture him easily enough the first time with their patented Super-Steel Spider-Net. I think he’s being a little over confident. In fact, move over Doc Ock, I believe Spiderman has a new arch-nemesis in town.

The Incredible Hulk and the Green Thumb 1977 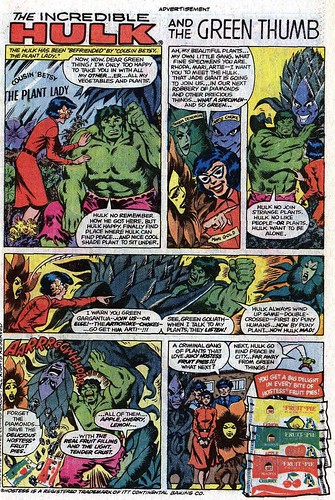 I think this takes the crown for the most pointless Hostess ad ever. I mean first “Hulk want sit near shady tree with lady”, then he’s all, “Screw you lady and your stupid plant people, ARGHHHHH!!!” The fruit pies are so tertiary to the ad it’s almost not funny. In the end I like to think this is really an ad starring the mighty Green Giant and he’s punishing the vegie people for cannibalizing their fruity brethren. Green Giant SMASH! 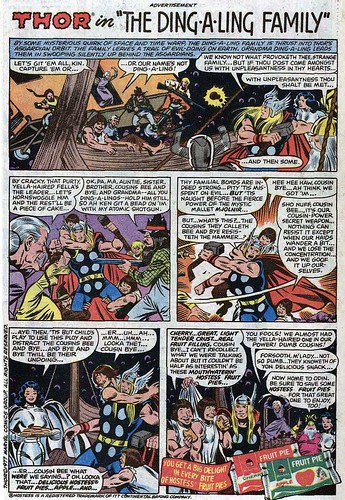 Oh man. Who’d of thunk that a fruit pie ad starring Thor and a bunch of inbreed hillbillies could be so damn wordy? By the By, I do believe hilarity ensues when you get two sets of folks together and each has a sho’ nuff funny way of gabbing on. I think I might need a secret Hostess Hillbilly Decoder ring to understand what exactly in going on here. Okay, so like Hillbillies in space (or what ever that area is on the rainbow bridge between Earth and Valhalla) is pretty cool, but when there are wonder powered twin cousins, who are strong enough in their redneck love connection to take down Thor (not to mention a smack on the noggin from Mjolnir), it just becomes so over the top cool that it starts back over at boring again. Okay, maybe it was all the words that made it boring, I mean these are Marvel Hostess ads which by definition should have at least 60% more action than the DC ads. Where was I? Oh yeah, wandering hands is like kryptonite for hillbilly twin cousins. I’ll have to remember that on my next trip to Hazzard county… 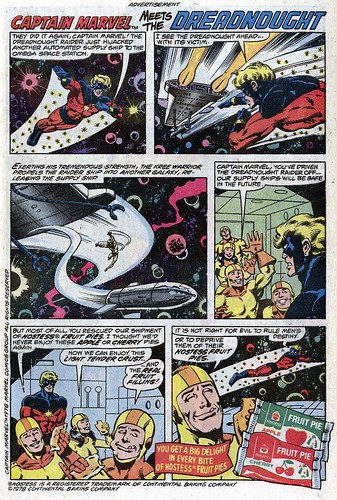 I don’t remember seeing a villain dispatched so quickly in a Fruit Pie ad before. Captain Marvel is apparently the man, no nonsense, screw the fruit pies, it’s men’s destiny that he’s concentrating on. 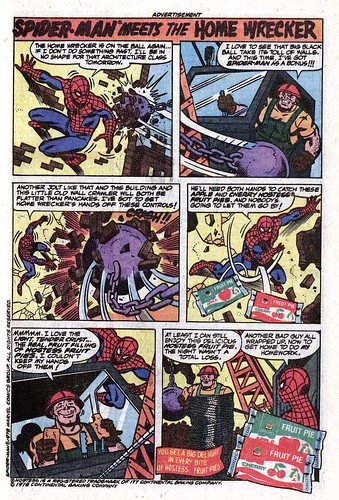 What an odd villain. It isn’t everyday that we meet a guy whose purpose as a villain is nothing any more grand than destroying buildings for destruction’s sake. No master plan for world domination, no money-making scheme, just plain old wrecking ball on concrete action for him. This is actually oddly refreshing. 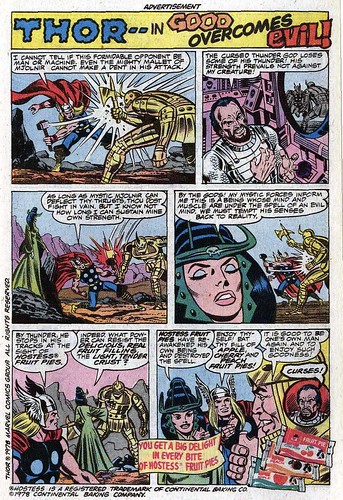 I’d be pissed too if my magically charmed super warrior was freed of my evil grasp by a few fruit pies. Curses indeed! By the way, is this a Jack Kirby Hostess ad, or just a look-a-like artist?

The Incredible Hulk and the Ultimate Weapon 1979 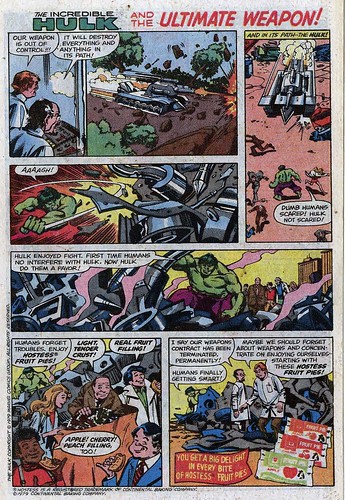 I really wanted to see Hulk grab one of the fleeing humans and throw them at the Ultimate Weapon (or ordinary tank if you prefer.) So, um, where did the uber huge bag of fruit pies come from? I’m assuming Hulk fruit pie ads are hard to write or something.

The Human Torch in the Icemaster Cometh 1979 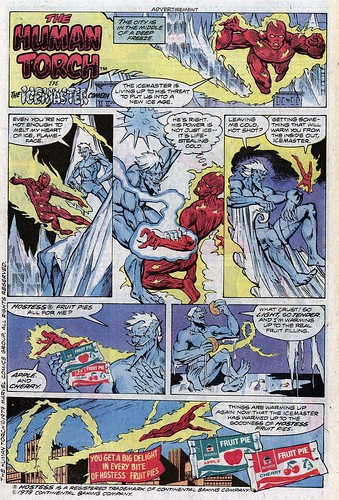 Seriously Johnny, I think the Icemaster was making a pass at you. Once again, much like in his cupcake ad, the Human Torch doesn’t seem all that concerned with actually capturing the villain. Maybe they hook up off panel or something. He’s such a player.

Iron Man in the Hungry Battleaxe 1979 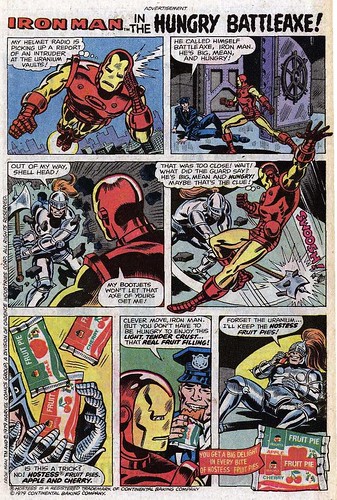 So, uh, was Battleaxe going to eat the uranium? Honestly, I do think that’s an awesome set of adjectives for a good villain, Big, Mean, and Hungry. Take a gander at the cop’s dialogue though, the dude was paid off by the board of overweight pastry company owners to slip in a nasty bit of not having to be hungry to eat. See, it’s comic ads faults that I struggled with childhood obesity!!! 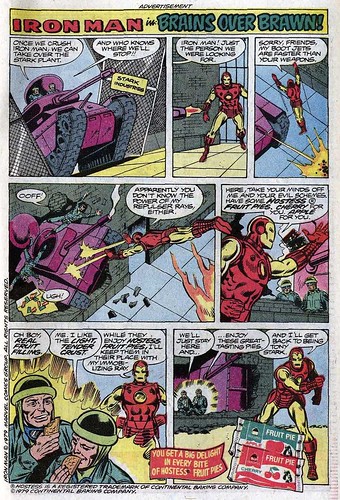 Dude Tony, way to go yelling out your secret identity there! Next time, thought bubble it why don’t ya. So why does every crack pot in the marvel comics universe think they can take over the movie with one weird looking tank? I guess they spend their childhood reading up on Rommel and developing a time portal device that only showed future movies, and even then on the C. Thomas Howell flick Tank. That’s got to be it.

The Thing and the Ultimate Weapon 1979 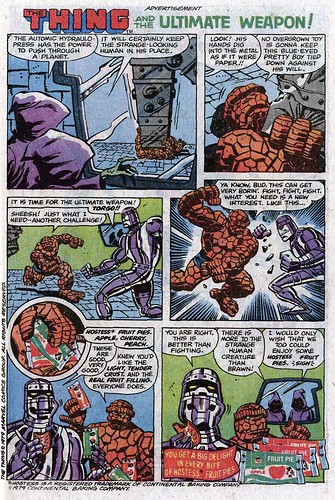 First off, robots only like Twinkies. Second, I wonder who took the time to gather all the scrap parts from that Hulk ad and rebuild the Ultimate Weapon into this fruit pie swilling, cape-less, Doctor Doom wannbe? Third, how in the hell did those two cloaked dudes manage to get the Thing in such a tight spot? Oh Ben, just give them a damn fruit pie already. Oh wait, considering how he reacted in the whole cupcake caper, I guess I have to assume that Mr. Grimm only gives Hostess stuff to friends and not enemies. Stingy bastard.

Don’t you understand, the only thing I’m good at is riding this bike!

Return of the Living Podcast!