I forgot to mention while talking up my visit to Bizarro Wuxtry this past weekend, that of all the stuff Devlin had in his store the thing that amazed me the most was that he had a handful of 80s stickers for sale. While I’ve been looking for a place that sells 80s era ephemera, magazines and the like, I’ve really wanted to find at least 1 set of stickers, or at least some original Garbage Pail Kids or something, and he had both. Not a large selection, but it was certainly heartwarming to find anyway.

Well, this week on Peel Here I’m finally going to share my collection of Michael Jackson stickers, which as I’ve said, is a much larger one than I ever thought I’d end up with. Mr. Moonwalker made up a pretty big portion of my musical influences around the age of 7, and even though I was never sucked in to the creepy extent that Macaulay Culkin or Corey Feldman were, I did have my a few bits of Michael Jackson schwag. The two things I remember the most were a cheap record store knock-off white, sequined glove and a horrible white, cut-off sweatshirt that looked like it was torn away to reveal a couple hairy fingers, some yellow cat eyes, and had the word Thriller above it in a gaudy green and yellow airbrushing.

The Thriller album was one of my first cassettes (along with a hand-me-down copy of the first Weird Al record, a Beach Boys best-of, and a Best of the Monkees tape) and I think I must have listened to the title track at least a million times (and each and every time I’d totally get freaked out by the Vincent Price narration.) I was also turned onto zombies through his crazy video collaboration with John Landis. The one thing I never did have that I coveted to a crazy degree was one of those sweet red leather jackets that he made popular in that video, but I guess in a way I’m also glad as I have enough 80s articles of clothing to already be some what ashamed of wearing (for instance that cut-off sweatshirt mentioned above.)

Seeing as how he was probably the biggest star of the decade, it doesn’t come as much of a shock that he was merchandised to hell and back, from a line of Michael Jackson dolls to school supplies, posters, and well stickers. Here’s a few that I’ve picked up on the cheap recently… 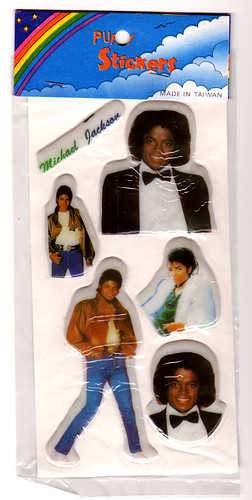 Now I have seen some more officially licensed puffy stickers, but these are pretty much the exact same stickers only in a very bootlegged looking package. These stickers are actually a nice representation of the transition that the King of Pop was going through during the late 70s and early 80s, starting with 20 something afro Jackson, going through early 80s clean cut Jackson, and on to the 1984 Thriller era wet-hair Jackson. I also really dig that since the afro picture was so cool, it had to be repeated.

Now for something a little crazier and a little more official, here is the complete first series of the 1984 Topps Michael Jackson sticker cards. 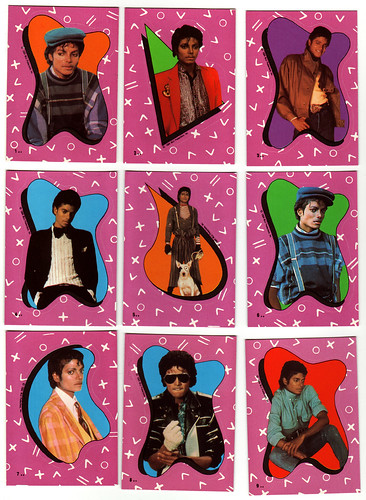 There were 33 cards in this set, which could be purchased in either packs, or in a carded set. The stickers themselves have two variations, one with the Topps copyright and one with just the MJP text, but both are the same. I don’t think I’ve shared any stickers that quite scream "designed in the 80s" like these sticker cards do, from their wacky shaped die-cuts, to the miscellaneous symbols in the background. The second card series is even worse as the BG is mint green, a much more 80s fad in terms of color. 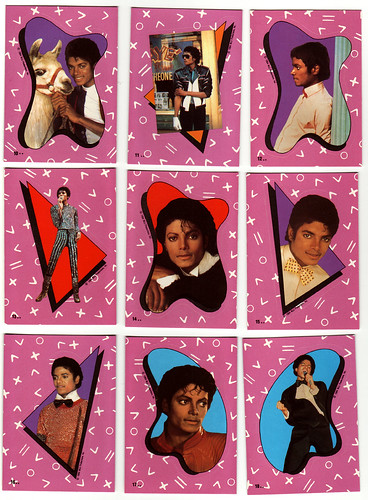 If the puffy stickers exhibited a nice transition of his style in terms of going from sort of normal looking to his more patented freaky appearance, these sticker cards are ten times better. They manage to capture almost every aspect of his style, from the glitter jumpsuits to his freakish Llama fetish and his white glove to his mastery of wearing bow ties with a sweater. 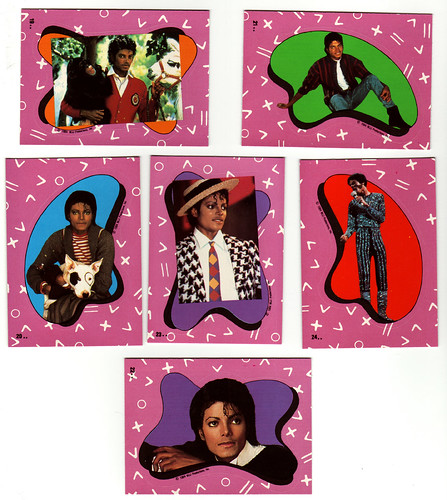 There was even a shot with his monkey, Bubbles. I wonder how many personally owned moneys have been stuck with that moniker since? 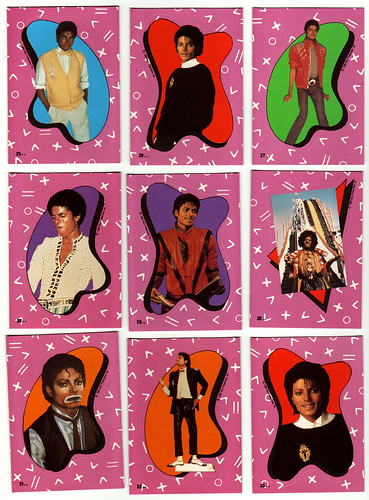 By far though, and the reason I bought this set in the first place was for the inexplicably awesome Sad Clown Jackson sticker. Is there a better image of Michael Jackson? When the hell did this come up in his day-to-day entertainment life, I mean what urged him to rock the sad clown? I think I missed that day of MTV or something. To round things out for this set we also get a shot of Jackson as the Scarecrow from the Wiz.

It wouldn’t be a complete Topps sticker card set without a couple of sets puzzle poster card backs, so here you go… 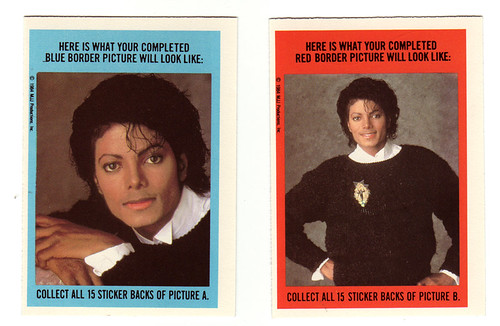 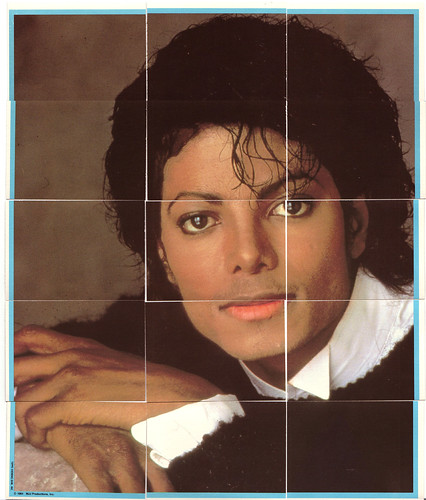 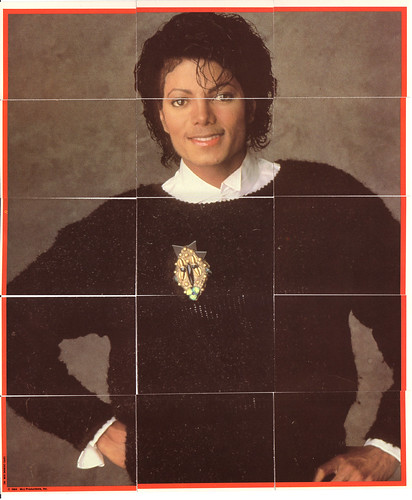 Last but not least, we have a couple of packages of Lazer Blazers extra large hologram stickers. I think I dig these the most because of all of the stickers featured, these seem like the type of merchandising that he’d of been really excited about. I mean as part of the whole hologram technology you get a 3-D like effect that we know he was super fond of, considering his Epcot flick Captain Eo and all (which I very much regret missing out on even though I lived just 30 minutes from Epcot growing up.) 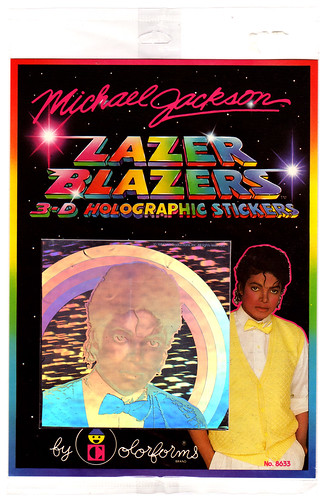 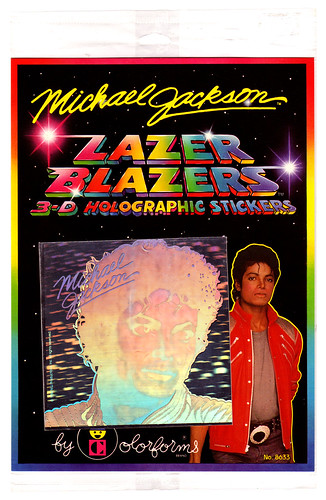 It’s kind of sad really, I thought that I would have a lot more to say, at least more funny things, but ultimately, I guess pretty much all of my love for the Smooth Criminal ended when I turned 10 and my musical interest shifted from easy listening Pop to Metallica and speed metal. Considering his downward spiral of self parody, and somewhere down the line, his buying into the whole god-like stature I’ve just never been able to get back into him, not even really in a kitsch kind of way. I do remember being impressed by his self-parody on an early season of the Simpsons, though only a little. Oh where or where is my 7 year-old self when I need him?

Next week on peel here, Jayce and the Wheeled Warriors fight the evil Saw Boss and the Monster Minds!

Diving back into Soda Pop Culture for a bit…

Return of the 31 Days of Monsters, Day 1: the Disgruntled Pooch!