Beetlejuice is one of those flicks that I think I’ve seen at least 50 times over the years and I never get tired of it.  This is one of those film projects where practically every aspect of film making just came together to produce something that for my money is just about as close to perfect as you can get.  It’s funny and light while also being fairly dark and morbid.  It has a wonderful mix of special effects, from practical and optical to animation (mostly stop motion), most of which haven’t dated at all, and still look better than 98% of the CGI out there.  It’s perfectly cast, featuring some of my favorite performances from actors like Alec Baldwin, Gena Davis, and Catherine O’Hara, not to mention Michael Keaton’s turn as the titular character (who has enough amazing scenes that he steals the film while only being in it about 20% of it.)  Most of all it’s one of Tim Burton’s most solid efforts that captures both his vision and style without seeming like a "Burton" film (like say how the Corpse Bride, Sleepy Hollow, and Charlie and the Chocolate Factory all seem to be a Burton film first and foremost.)  Everything in the film feels like it’s part of the Beetlejuice universe more than the Burton universe. 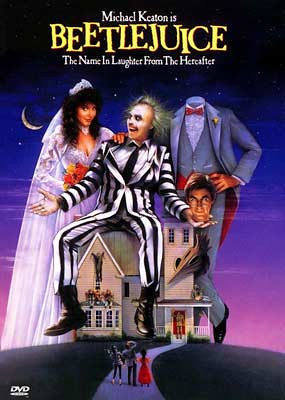 Because it’s been on TV so much in the almost 20 years since it was released it was never a film that I felt a need to own, but as soon as I began focusing my DVD collection to be comprised of only the films that I want to watch if I gave up TV, it became one of those films that shot to the top of the wish list.  Unfortunately, because I’d seen it so much I also didn’t feel like spending all that much on it and it wasn’t until recently that I ended up buying the film when I found it for super cheap.  I think a lot of my must own movies have fell into this category, flicks like Beverly Hills Cop, Caddyshack, One Crazy Summer, Die Hard, Red Dawn, Young Guns, the Goonies, these are all flicks that I waited to buy until I could find them for like $5.  It’s hard to drop $15-$20 on something that you know so well you’ve practically memorized it.

Eat your vitamins and turn your little sister blue with fear…

As long as I’m cleaning house…