Well, it’s that time again, time to jump back into the wonderful world of Hostess comic book ads for some much needed advice on how to defeat both evil and our insatiable hunger with snack cakes so tasty that Batman refuses to eat them (for if he did, you know he’d spoil his bat-dinner and Alfred would have to scold him something awful.) Today though I’m going to switch gears a bit and take my first look at how the Merry Marvel Marching Society deals with the incredible power of moist chocolaty cake, topped with fudgy icing, and its real creamed filling. Without further to do I present the Essential Marvel Hostess Ads Vol. 1, Cupcakes 1976-1981.

Spiderman in The Champ 1976 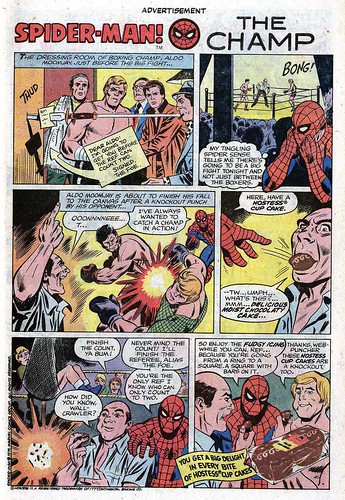 So after reading my firs Marvel Hostess ad all I can really say is, holy crap that was action packed! Well compared to their DC brethren, which tend to roll between lazy to just plain weird. Every single panel in this ad has a beat of action; knife impact, the bell ringing the start of the fight, a real whammy of a punch, a cupcake in the mouth, and explosion on the mat, and faces stuffed with snack cakes. ACTION. I guess this is why I was a Marvel kid growing up, even their advertisements were action packed. On weird note, what nationality does the surname Moomjay fit into? 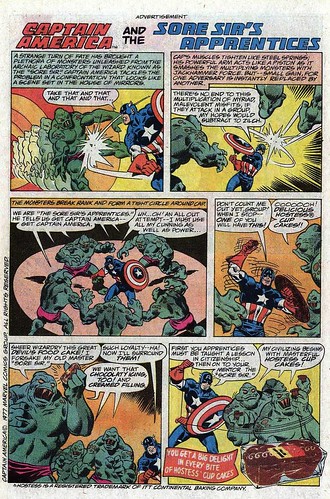 “…and that and that and that and that…” This Cap ad from 1977 is sort of a beast with two natures. At the beginning it’s all bif, bam, pow, and then it completely crumbles with Cap’s cupcake cunning. Did I mention that the alliteration was out of hand in this ad? I love the extensive back story as well, though I think the Sorcerer’s Apprentice reference was muddled to a point of, well, pointlessness. 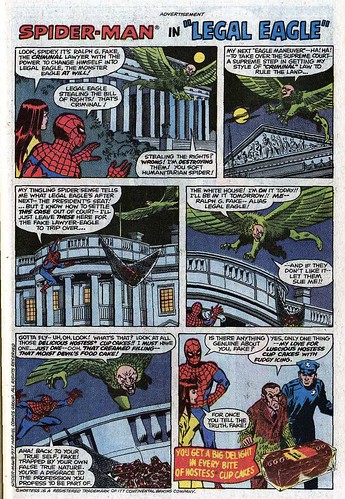 I Object to this ad! Actually, that’s not true, and my fake true nature is shinning through because I love this ad. Holy crap, I didn’t think there would ever be a more convoluted Hostess ad than the World’s Upside Down one, but this one is right up there. I’m not sure if the writer intended for the “legal speak” to be quite as confusing as it actually came out. But before I can deconstruct that, I have to mention that this has to be the worst rip-off of an already existing character yet. The Legal Eagle? Really? Was the writer so desperate to use the Vulture that he had to stoop to this level? Things I absolutely love about this ad: LE’s manical mid-sentence laughter in panel 2, Today I’m on it, Tomorrow I’ll be in it (just sounds dirty), “…trapped by your own false true nature…” What does that last line mean?

Spiderman in Spoils a Snatch 1977 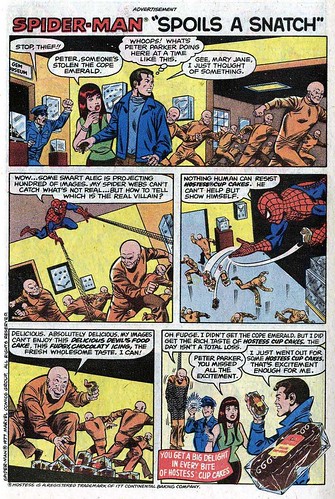 I swear, the word snatch is so ruined on me. Anyway, this is way more in line with the DC versions of these ads as total insanity replaces any semblance of natural plotting. You know, it’s kind of disconcerting to hear Peter thinking in the third person. Maybe eating too many Hostess cupcakes can do that to you, leaving you with a brain that functions just above the level of the Hulk’s. Also, way to go on winning MJ’s heart and trust by excusing your “ditching her” with stories of a crazy cupcake craving.

The Incredible Hulk Changes his Mind 1978 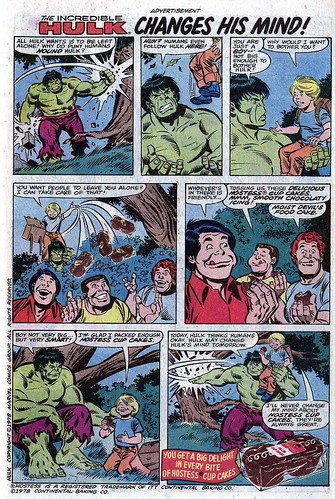 Speaking of the Hulk, here’s a weird ad from 1978 where the big green gut gets to exhibit his penchant for punching and karate chopping trees. I hear it’s great for anger management, and oft times you’ll be rewarded with falling kids and Hostess cupcakes to drive those evil puny humans away. Hey, I don’t want to be a wet blanket, but if you throw a bunch of cupcakes to some guys you want to stay away from you, won’t this have the opposite effect? Oh crap, now I think the hulk is gonna get pissed at me because I dissed his little friend’s brilliant plan…

The Human Torch in Blown About 1980 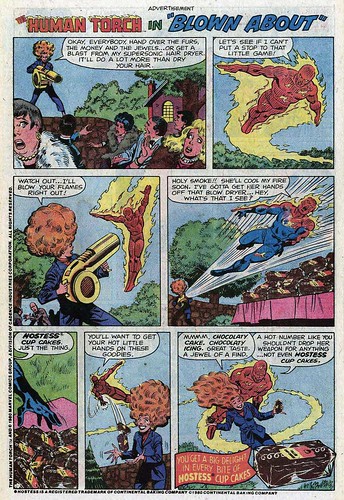 So, um, are they like, going to do it? I mean, Johnny didn’t mention prison or anything. Maybe I’m reading too much into it. Oh, and last I head fire lives on oxygen, so like, that’s just a silly plot point. 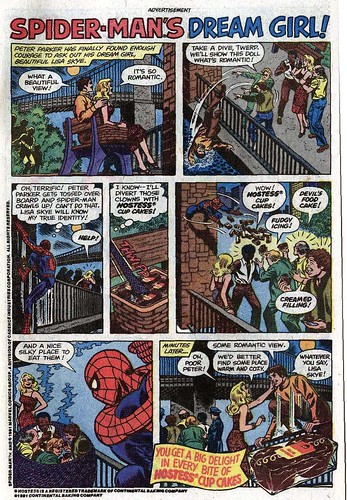 Remind me to refer to my wife from now on by her first and last names. Seriously, who is writing the dialogue for Peter in these ads? Witty my ass. Also, what was the aim of that gang of thugs? Like I mean, were they going to like take Lisa Skye out for coffee and a movie, or where they going to like, gang rape her? This is just sort of an odd and somewhat inappropriate version of the bully kicking sand in the nerd’s face I guess. Man, in the 80s whole gangs of bullies stole your girl I guess.

Spiderman vs. the Human Computer 1981 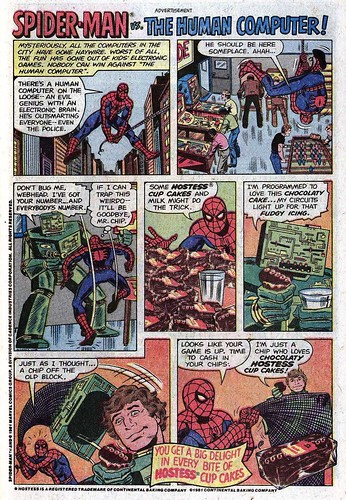 Jesus, just stop saying “chip” already, and way to go mixing your metaphors to an insane degree. This ad lost me when Spidey repeated the plot set up narration in the first panel.

The Thing in A Lesson to be Learned 1981 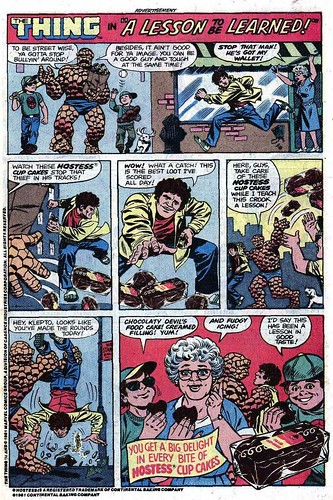 I’m walking away from this ad with the firm belief that something evil is about to happen to that mugger. Look in the background of that last panel. Thing is giving that guy the “Hey, welcome to prison, and I’m so glad YOU’RE going to be my bunk-mate” look. It’s clobbering time indeed.

Well don’t you know that there are plenty more of these Marvel Hostess ads on the way? We’ve still got plenty of Fruit Pie and Twinkie puns to wade through, so until then, Make Mike Marvel!