So I was going to share my collection of 80s era Michael Jackson stickers today, and I was planning on writing the entire review while simultaneously doing a continuous cross-over-shake-kick, grabbing my crotch with one hand, pointing to the sky with the other, and screaming "Jamone!" at the top of my lungs (I’d be typing with my very un-plastic surgery altered nose), but I have a very special pre-emptive edition of Peel Here to present. Esteban (Crazysteve to some I believe), who’s got a very funny blog, Please Save Me Robots (as well as being the owner and proprietor of the Vintage Space Toaster Palace and Wrecked Special), decided to dig out and share a bunch of the stickers in his Transformers collection as well as shedding some light on what other TF stickers were available in the 80s. It’s crazily even on my birthday, and no that isn’t a cry out for well wishes or presents from strangers, just a fun coincidence.

As I mentioned in the last Peel Here column I had a pretty hard time tracking down Transformers stickers when I started this crazy 80s sticker collection, only really finding one package of Lazer Blazers, one unused Transformers Aladdin lunchbox sticker, and one of the four packages of Lenticular stickers which were intended to be used with the 1985 Transformers Stick-N-Play activity book. From time to time I’d notice an auction pop up for some small loose individual G1 stickers, but they were pretty expensive (at least for my tight wad self, I am trying to get a broad example of branding after all) and never really clear as to whether they were complete sets or not. Add to this that they were supposed to be packaged with a set of trading cards called Action Cards, which in eBay auctions looked mighty bootlegged, so I stayed away from them. Luckily Esteban collected these when they originally came out, so I’ll let him fill you in on these in his own words…

"Action Cards were somewhat hard for me to find and I only found the packs in one little mom and pop store in Los Angeles. I grew up in Texas and I used to visit L.A. when I was a kid back in the summer of ’85 and ’86. That store had the packs for $1 each and they came with eight cards." 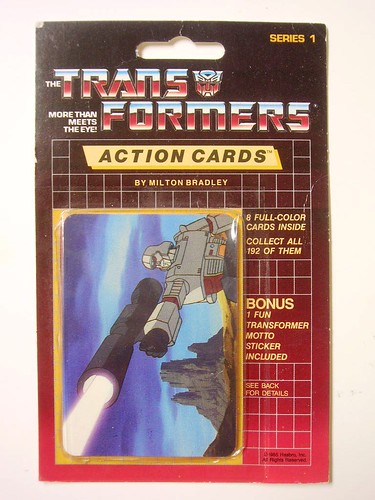 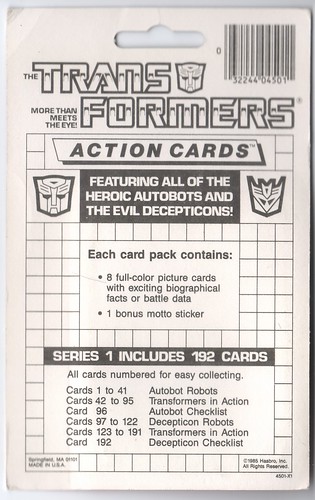 "As a little bonus each pack had a small sticker that featured the box art of one Transformer character alongside their tech spec ‘motto’. From what I’ve been able to gather on the internet and from other collectors is that there were 13 Autobot stickers…" 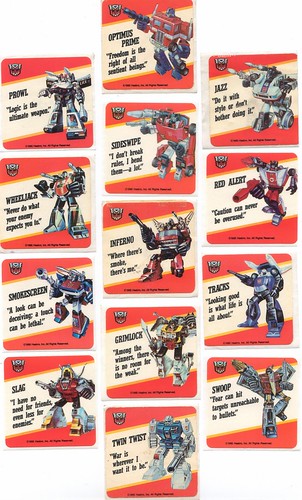 "…and 11 Decepticons. I never knew about the eleventh Decepticon, Skywarp, until three years ago when I started doing research online. As the rarest sticker in the set he is extremely hard to find." 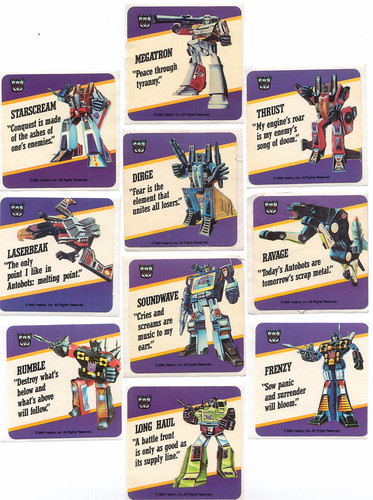 Now that I’ve gotten a chance to take a closer look at these I really love ’em. I’m a total sucker for the box art paintings that were done for toy lines like Transformers, G.I. Joe and M.A.S.K. On the one hand there is something very alluring about the crazy dynamic poses, and in the case of G.I. Joe the crazy fireballs that all the characters and vehicles were exploding out of, but more so I think even as a kid that there was something special about them because they were painted and not just pictures. It really made it seem like these companies were putting a ton of time and effort into every aspect of the toys, which when you considered the cartoons as well offered an awesome richness to the collecting aspect. The Transformers box art is a little different too in that it’s based on the toy design and not the cartoon counterpart.

So having 24 or so stickers with nice individual examples of this is pretty cool, though I’m glad they ditched Ironhide and Ratchet because those toys were just weird. Also, and even though I’m not typically a fan of it in toys (hindering creativity and all), I like that they included the character’s tech spec quote/flavor text. I can imagine kids growing up with both these and the packaging, and if they were like me they sat and digested stuff like this for hours, and then being able to remember personalities if not the exact character quotes 20 odd years later. Hell, the "Freedom is the right of all sentient beings" Prime quote is referenced in the new movie even. I mean I’m sure there is a good 50/50 split between kids who grew up with the characters being who they were designed and written to be and kids who ignored that stuff and made their personalities up themselves. I leaned towards making up the personalities, but I wonder how much of this was because my parents typically opened my toys before they gave them to me so I never got a chance to see this type of thing. Maybe that’s why I would pour over the packaging, not to mention the oft times included catalog, as if it were the most interesting reading ever.

As far as the characters that were chosen for each set, I’m surprised to not see Bumblebee in with the Autobots, or any of his other smaller kin. Which, now that I’m on the subject kind of, is another interesting facet to the whole Transformers collecting phenomenon as to which side you fell on as a kid, more of the larger toys, or more of the cheaper smaller toys. I was kind of in the middle having some of the larger figures, though most of my collection was comprised of the mini figures and Soundwave’s tapes. Most of the guys I know now had mostly the smaller toys, and were always happy to see them represented in merchandising, an area that besides Bumblebee seemed mostly set aside for the larger figures.

The second, and much rarer, part of Esteban’s sticker collection hits a little closer to home in terms of the type, lenticular, which seems like a design that was created especially for Transformers, though obviously it wasn’t.

"The second set is crazy rare and most Transformers fans are unaware of its existence, which is odd because it was part of one of the most popular Transformers promotions ever. Back when Cookie Crisp did their mail-away Jazz promotion, each cereal box also included a little square lenticular Transformer sticker. The exact number of stickers in this set is unknown to this day. I know because I’ve asked many of my friends who are way more into Transformers than me and I’ve even been able to contact some hardcore mega collectors who could be considered true experts in the field and nobody is sure how many stickers there were in this set." 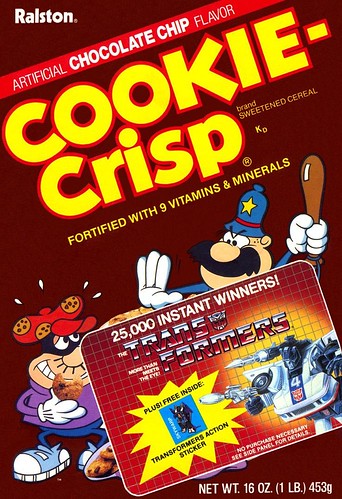 "So far I’ve been able to confirm the existence of 14 in this set (Astrotrain, Beachcomber, Blitzwing, Galvatron, Megatron, Mixmaster, Omega Supreme, Perceptor, Skywarp, Slag, Snarl, Soundwave, Swoop, Ultra Magnus.) There are probably many more since I haven’t confirmed the existence of some characters who would only make sense like Optimus and Jazz (I figure Jazz should exist because the whole Cookie Crisp promotion was Jazz oriented in the first place, but it’s just speculation on my part.)"

Esteban also provided a link to his friend’s Transformers collections site (which is pretty darn full and nifty) called the Transformers Museum.

Cereal premiums, in particular stickers, seem like they would be pretty frickin’ rare to me considering that most kids burn through stickers as it is, but since they aren’t typically part of a larger collection, or even if they are you parents probably didn’t buy enough (or you couldn’t eat enough) to get them all anyway, they probably weren’t saved. Here are links to the individual Cookie Crisp stickers in Lewis’ collection: Astrotrain, Beachcomber, Galvatron, Megatron, Mixmaster, Swoop, and Ultra Magnus.

Last up today are some more of the style of lenticular (or switchable as the packaging refers to them) stickers that I shared way back on Peel Here #2, the stickers that were meant to be used with the Transformers Stick-N-Play story and activity book. Esteban sent in scans of the two other individual packages of stickers, the Attack and Figher packs to go along with the Battle pack that I shared before. 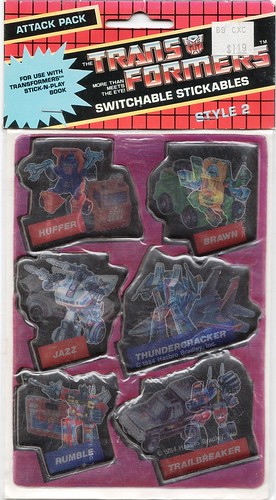 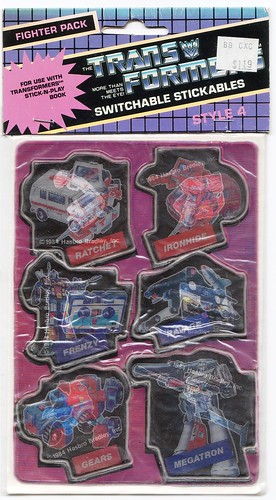 I really love that Brawn sticker for some reason.  The book itself came with the first pack of stickers, which included Optimus Prime, Windcharger, Sunstreaker, Starscream, Skywrap and Soundwave. These stickers, like a lot of puffy stickers that had official albums/books, were meant to be applied and re-applied, treated as toys in a way. The only time I ever used puffy stickers in this manner was when I was being punished by being kept alone in a room and the only thing I had to entertain myself was a package of G.I. Joe puffy stickers that I snuck in with me. I played with the stickers like toys, but then immediately regretted it when they had a bunch of stray hairs and carpet fibers stuck to the back of them.

Anyway, a heartfelt thanks goes out to Esteban for sharing these awesome stickers. I feel like the Transformers have now been much more throughly covered on Peel Here, not to mention fleshing out the lenticular collections from before and such.

Next week we’ll get back to our regularly scheduled topic, Michael Jackson, and I’ll consider moonwalking in place for the duration of the time it takes me to write the column. See you in seven…