Transformers the movie, or how $10 transformed and rolled out of my bank account…

Well, the wife and I broke down and decided to catch an early morning screening of the new Transformers movie this past weekend (the AMCs by us are offering $5 screenings before noon on the weekends now.) Now, I’m not a diehard Transformers fan, I’m more of a fan of 80s cartoons and toy lines in general, but when I first started seeing pictures and designs for the new flick I was not impressed. Actually, let me rephrase that, it’s not as much as that I wasn’t impressed, I just didn’t care all that much. Like I said, I’m not a diehard fan and I haven’t been all that interested in much of the Transformers material for the last 15 years or so. I missed the boat Beast Wars, I have no idea what the Beast Machines show is about, I didn’t care for any of the more recent incarnations (Armada, Minicons, Energon, the new Unicron story) in either cartoon or toy form, and though I really dug the artwork associated with the early 2000s Dreamwave comics, I didn’t really read many of the actual books. It hasn’t been until more recently that I’ve gotten excited again through the Classics and Robot Heroes lines of figures, which are heavily G1 based. So when the movie was announced and the pictures started leaking onto the internets, I was just sort of "eh" in my reaction.

Now at the same time that I’m more or less sticking to my G1 guns, it’s not the only reason that I don’t care for the movie designs and such. My wife brought up an interesting notion, which is that the movie character designs look a whole helluva lot like the Lego Bionicle toys, which I don’t really like all that much. Once again, I’m more of a fan of the blocky classic style legos as opposed to the Technix, or any of the lines that feature more of the specifically molded pieces that can’t really be used for much more than what they are designed to be, e.g. the Batman, Star Wars, and in particular the Bionicle Legos. See I like the idea of using Legos as building blocks to create whatever you want, not to put a toy together like a puzzle.

Anyway, looking at the pictures below, it’s hard to say that they aren’t very similar in form, and I guess this has been something that’s been in the back of my head that my wife helped me see… 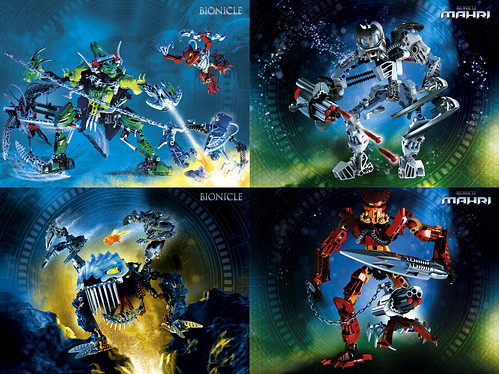 So there’s that. Well what about the actual film now that I’ve seen it you ask? I guess it was all right. I didn’t hate it nearly as much as I thought I was going to, and there were actually a lot of aspects that I really enjoyed. Is it a good film, well other than that being a very subjective question that has no real answer, I guess in my opinion I’ve have to say I’m about 50/50 on that.

I guess I’ll break it down by things I dug, and stuff that I could have done without.

-Shia LaBeouf. Shia did a great job of playing the funny, kind of dorky guy who is a window into the world of the Transformers for the audience to follow. He was convincing and without the whining tendency that this type of character is prone to, while also not being the smarmy, joke-a-second, Ferris Buller/Han Solo rip off that we also tend to see in this role. He also looks a lot like Spike from the old cartoon.

-The military scenes in the beginning, and peppered throughout the flick. If there is something that Michael Bay excels at, it’s portraying the military in that "convincing enough for anyone who knows nothing about the actual military" movie fashion. Now I’m not talking about the NSA and interior scenes, just the base being attacked and the survivors being stalked by Scorpinock.

-The nods to Transformers fandom throughout the flick, like having the old yellow VW bug in the used car parking lot, Optimus’ classic John Wayne-esque lines ripped directly from the original cartoon movie, having Megatron be frozen in the artic (ther are similar plot points in the Dreamwave comics), involving Hoover Dam as a plot point (there was a dam that was important in one of the earlier cartoon episodes though for the life of me I can’t remember the name Sherman Dam maybe, I guess I’m going to have to break out the Transformers Monopoly board game to check), and nods to both Vector Sigma and Energon cubes with the whole Allspark cube (as well as sacrificing one’s life to activate/deactivate the cube.) I’m sure there are more, but those are the ones I caught.

-The general plot, which early plot holes aside, was an enjoyable Transformers story that managed to get across the basic key points of practically every incarnation that came before.

-The CGI. Why is it that movies associated with Stephen Spielberg always seem to have excellent use of CGI? The only nitpick I had was some of the soft walking that the transformers were doing. They look like they weigh at least 5 tons each and yet can walk as light as a feather when they want to.

What I didn’t care for (warning Spoilers):

-A big plot hole in the beginning of the film involving the Autobots and Decepticons knowledge of Sam Witwicky, his grandfather and the whole "location of the Allspark cube". If Megatron has been frozen in the artic for like ever and he is the only one to make contact with grandpa Witwicky, how do all of the Transformers characters know about the glasses and all that rut? Even if the Decepticons know, say Megatron managed to get a message out or something, how does Bumblebee know to get himself sold to Sam? Were the rest of the Decepticons even looking for Megatron? Along with this plot hole is a coincidence that bugged me a bit, why did the Decepticons attacks have to coincide with Sam placing his grandfather’s stuff on eBay? Why are the Decepticons even attacking now, and why not previously? It’s just bad writing in my opinion when you have to rely on huge coincidences like this.

-The whole Anthony Anderson side plot. First off all, we get this same character at the beginning of the film with Bernie Mac (who even makes similar "screw you mama" jokes.) Second, is there any reason why he couldn’t have been on the NSA team to begin with? There was already an overweight funny hacker dude on the team, why couldn’t it have been Anderson, why did the character have to be outside of the situation just so that the Aussie chick could go to him and get arrested? This does nothing but slow the plot down and repeat jokes. Third, for a super impressive hacker (the only one in the world able to decode the signal) he sure didn’t do anything except eat a plate full of donuts and make a Wolverine reference.

-The sequence where Sam is trying to sneak into the house late to get the glasses for the Autobots. That was at least 10 minutes of really pointless sneaking around (with 5 giant robots no less) that made me want to cry. Not only was it silly and out of character, but it also managed to squeeze in a pee joke, which was just more than I needed and set up the next thing I didn’t care for…

-The Autobot Bat-Signal. What is this, Transformers or Thundercats?

-Frenzy. Why is the "annoying" little evil character archetype used so often? He’s basically Salacious Crumb hopped up on amphetamines and addicted to downloading.

-The Allspack cube being so freaking large, and then "transforming" into a football sized cube. Why did it have to be so big in the first place? That was just kind of silly.

At the end of the day the flick was entertaining, which is all it really needs to be. I don’t need affirmation that the stuff I loved as a kid is "still cool" by having an awesome new movie to get everyone else in the world on board with my fandom just as much as I don’t really care that this movie is pretty much like every other big Hollywood flick to a point where you can almost just interchange characters, directors, and what-have-you’s and no one would notice. There was a time when films like Terminator 2 stood out for being this type of movie, big crazy action driven, etc., and now anything that isn’t like this are the standouts. It’s just the world we’re living in. Man even this review is kind of wishy-washy. I guess if you take nothing else away, remember that the new Transformers look like Lego Bionicles. That would make my wife very happy.

I think it’s safe to say that this is my favorite book ever!