It’s true I was there number one son…but they treated me like number two!

Batman Returns is such a weird movie.  It sort of holds the opposite distinction than the first Batman for me because whereas I was the perfect age for the first film, when this came out in theaters I was 15, sort of jaded and ended up pretty disappointed in the movie.  In fact this is one of the first flicks that I should have loved but didn’t which has only gotten worse and worse as I’ve gotten older.  Tim Burton has provided a lot of firsts for me I guess. 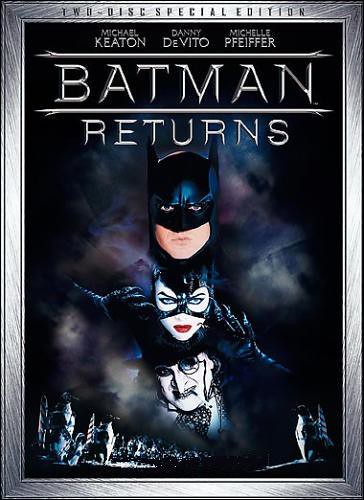 What I remember most about seeing this film in the theater was that a local comic shop, not my favorite but one I was trying to support anyways, had booked all the seats for the 8:00pm Friday night screening on it’s opening weekend.  This comic shop was sort of out of the way, but it was a weekend, the weekend before the movie opened, and my dad had agreed to drive me out to the shop, though I could tell he really didn’t want to.  When we got there I saw their flier for the screening and decided right then and there that I had to attend.  I ditched buying comics for that week and picked up a ticket to the screening which was a little pricier than the normal ticket rate, but he was going to raffle off prizes before the movie so I thought it was worth it.  Well on the trip home I all of a sudden remembered that my friend Stephen would probably like to go, but I wasn’t sure and I didn’t have enough money for another ticket, so I begged my Dad to drive all the way over to his house so that I could ask him (I had it in my mind that this had to be done right away as the screening was going to sell out.)  Obviously this was before cell phones become so common, but my dad was a trooper and took me over.  Stephen did want a ticket, but he didn’t have a ride, so in came the next round of ride begging from my dad, who begrudgingly, very begrudgingly took us both back to the shop to get Stephen a ticket.  I think my dad must have driven us at least a hundred miles back and forth all day just to get these two tickets, and in the end I didn’t even really like the film.  Upon reflection I think it’s kind of weird the lengths I went to , to see the film in that particular screening, I mean it’s not like we couldn’t have just gone to the movie at a different theater or showing.  I didn’t even like the comic shop owner and pretty much didn’t know any of the other patrons of the shop, so it seems kind of weird that I was so hell bent on seeing the movie with a room full of comic fans.  I guess I thought that it would make the experience cooler, but then I guess years of going to comic conventions since then has soured me on that notion.

Over the years Batman Returns has grown on my quite a bit.  I love the lengths that Tim Burton went to in order to keep some semblance of creative freedom, even going so far as making Batman a minor character in a film full of villains just to keep his interest up.  At the time I hated it, but now I just think it was an amazingly brave move.  Hell, done right the villains usually provide the more interesting fodder for stories any way, so it stands to reason that they could conceivably carry a movie.  I’ve always thought that Danny Devito was the only choice to play the Penguin, in particular in the somewhat gory, dark, twisted Burton style.  High Society, Top Hat-Wearing, crime lords just seem goofy, but put ’em in dirty pajamas, with actual penguin-like deformities, surround them with sideshow flunkies, and I’m on board.

If the first film felt like Tim Burton invading Batman’s world, than this film feels more like Batman, Catwoman, and the Penguin invading Burton’s.  It’s unfortunate though that the series didn’t end here because this film introduced a lot of aspects that, though they worked here, would go on to help ruin the further sequels.  Having the Batmobile be able to jettison two thirds of it’s mass to fit down a narrow alley was kind of silly and it lead to doing all kinds of weird crap with the car later on, not limited to driving up the side of a building.  It was in this film where the villain to super hero ratio was upped as well.  For all intents and purposes there were three villains in the film (between Devito, Pheiffer, and Walken), which would be surpassed in Batman forever by mixing Two-Face, his gang, his girls, the Riddler, and a weird gang of neon, glow-in-the-dark paint wearing freaks, and then again in Batman and Robin (Bane, Poison Ivy, that weird doctor guy, Mr. Freeze and his crazy henchmen) though at least by then there was a Robin and Batgirl to help make it a silly character filled madcap romp that, 2 hours of my life that I’ll never get back.

For the longest time I had the basic no frills cardboard snapcase editions of these first two Batman flicks, but I traded them in for the nice special editions that came out about a year ago, which were really long over due.  There aren’t many movies that I’ve traded up for on DVD, but these were just too important to me to pass up.

The Last Man on Earth is Legend!