One of the joys about visiting Florida is getting a crack at all of the new soda, candy, and snack products that are available there. I think Florida, at least central Florida, is a test market for new weird food stuffs. It was there that I first saw Pepsi Blue, Jolly Rancher Sodas, and a million weird candy varieties. Well as sort of a death knell/bookend for/to one of my favorite sodas that I can’t seem to find anymore (Jolly Rancher Watermelon), I present what will probably be the last soda in the Jolly Rancher line, Cinnamon Cherry Fire. 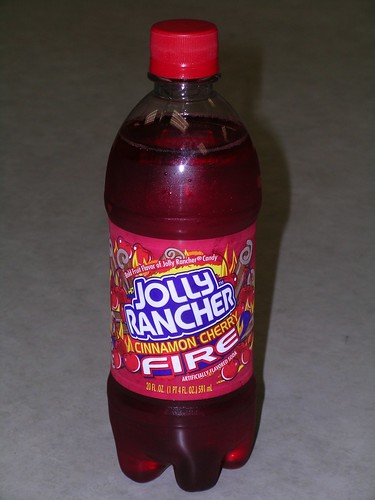 Drinking Jolly Rancher Cinnamon Cherry Fire reminded me a lot of what it must have been like for Andrew to drink the titular concoction in Judy Blume’s Freckle Juice. I pretty much had to pinch my nose and gulp it down while trying not to gag on the mixture of weird medicine-y flavors and the inescapably horrible spicy bite of an aftertaste. I wasn’t even expecting a crop of luxurious freckles afterwards either, so all I have is this account of how gross this soda is as a reward for my bravery. Actually I’m exaggerating a bit, but only a bit. I honestly think I would rather have had a glass of just plain fire.

I guess the fine folks at Elizabeth Beverage Company had a brain fart when deciding to go ahead with production on this flavor after cutting back on the more or less normal fruit flavors of the original line. If Green Apple, Grape, Blue Raspberry and Watermelon didn’t work, well then I guess the next logical step would be combining Cherry with their Atomic Fireball-like Fire flavor to really kick the thirsty soda drinkers in the ass? Maybe it’s their comical way of getting back at a buying public that let the original line of sodas fail, but at the end of the day this is kind of mean considering the only people zany enough to pick up Cinnamon Cherry Fire are probably those who DID buy the original sodas. Either way I envision this flavor marked down to 10 for a quarter on my next trip down to Florida, where it will probably gather dust next to the bin that was still full of Bubble Yum Sodas.

Return of the 31 Days of Monsters, Day 25: When Giant Mantids Attack!