I was at the perfect age when Batman came out, 12, which was not so young that the movie was over my head and not quite old enough to start being jaded about adaptations.  More personally, I was also a year into collecting comics pretty heavily so I felt like I was at the forefront of the entire comic industry boom that literally blew up overnight after the release of this flick.  This film also marked another turning point in my life as it was what was bouncing around my head right before my family left Florida (where I’d spent most of my life at the time) for first New England, and then Georgia (where I’ve planted my roots ever since.)  With every move Batman was always there for me as both something comforting to watch, or an ice breaker when meeting new people, at least when looking for comic book minded people.  To top all of this off, Batman also marked the point when my parents caved in and finally bought our first VCR, something that on the surface doesn’t seem all that important, but to me it changed the way I watched movies from that point on. 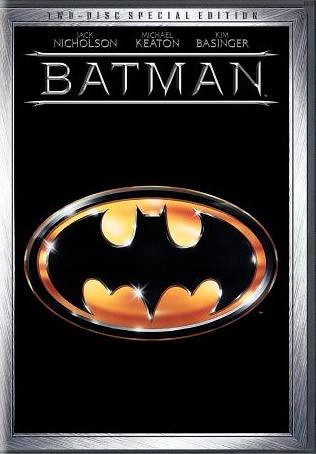 With our new VCR I found myself starting to build my own little movie library, first by taping flicks off of TV (mostly HBO and on Saturday afternoon UHF matinées), and eventually by saving up and buying the flicks that I loved.  Of all my collections over the years, my film library has been the the only one that I’ve consistently worked on or grew.  Before I made the plunge to DVD I had amassed over 300 VHS cassettes, which doesn’t sound all the impressive until you realize that it took two full bookshelves to hold.  Now I’m not playing "mine is bigger than yours", I’m just stating a fact that no one I knew seemed crazy enough to have that many movies on hand, I mean you rented VHS tapes, you didn’t buy them.  Now I have a collection of over 600 movies and 130 odd TV shows on DVD, which if you asked my 1989 self if I’d ever have a collection like that I/he’d be likely to laugh you out of the building.

Like I said above, since I was only 12 when the flick hit theaters and I wasn’t quite old enough to be jaded, I fully accepted the Tim Burton version of batman as the way Batman should be, all latex muscle suits and super long phallic bat-mobiles.  Before Batman hit I was sort of into the Super Friends cartoon and honestly I pictured Batman to be more like the Adam West TV show.  Burton managed to completely change this for me and was a window into a more serious interpretation, something that suited my new found interest in characters like Wolverine and the rest of the X-Men.

Though I only saw the movie in the theater once, I bugged my parents for every possible scrap of Batman merchandising, all of which I squirreled away in a comic box for years.  I had boxes of Batman cereal, plastic piggy banks, ping pong ball guns, stickers, coloring books, action figures, die-cast cars, micro-machines, souvenir magazines, picture books, movie novelizations, candy dispensers, and trading cards, you name it, I had it.  Well, I had everything but the actual comic books.  I was so into the Burton Batman that the regular comic series didn’t hold much interest for me at the time.  In fact the only Batman comic that I could get into surprisingly was the Dark Knight Returns.  Being 12, the book was way over my head, but I loved it anyway.

Pretty much this flick has held up for me consistently, though in more recent years I’ve begun to see how it’s sort of changing from what I once thought was the perfect example of a realistic live action comic book adaptation into a singularly stylized interpretation, the kind of film that sort of needs to stand on its own instead of being the basis for any sort of continuity (a mistake that I believe lead to the downfall of the movie franchise much more so than hiring Joel Schumacher, George Clooney, or Arnold Schwarzenegger ever did.)  Tim Burton’s Batman is much like Frank Miller’s Dark Knight work, it’s a very passionate work that is best served as a diversion from the concept, a great companion piece.  Stick with it too long and it’ll only end up becoming a parody.  Honestly, I think this can pretty much be applied to most iconic comic work, in particular the super hero genre.  Why are we as comic and movie fans so hung up on continuity?

Wow, there was even an E.T. Coors beer endorsement…