Well, even if I’m not all that interested in the new Transformers movie, I can be thankful that a portion of the merchandising has helped to bring back a lot of memories. In particular I found an awesome set of pencils while browsing the $1 bins at my local Target. There was a little section of Transformers odds and ends (seriously mismatched stuff like Frisbees in one bin next to magnets, pencil cases, but it was all super cheap so I guess it doesn’t matter) and I noticed this package of old school "mechanical" pencils… 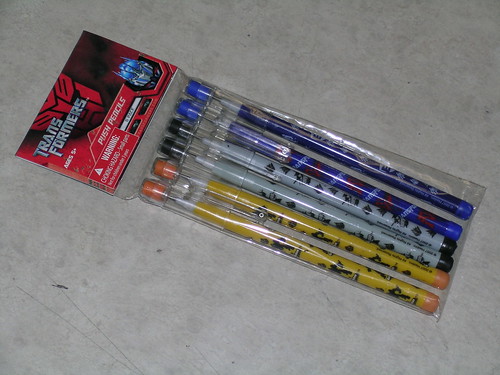 Now I realize that they aren’t technically mechanical pencils (they’re labeled push pencils), but when I was a kid, before I became obsessed with the slim Pentel mechanical pencils, my only experience with a "mechanical" pencil were either the ugly yellow plastic pencils where you twisted the point to get the lead out or these push pencils where once you used up the tip of lead, you pulled out the plastic nib lead holder and pushed it int eh back of the pencil which advanced a new nib of lead. I guess these are like the stick shift of mechanical pencils. 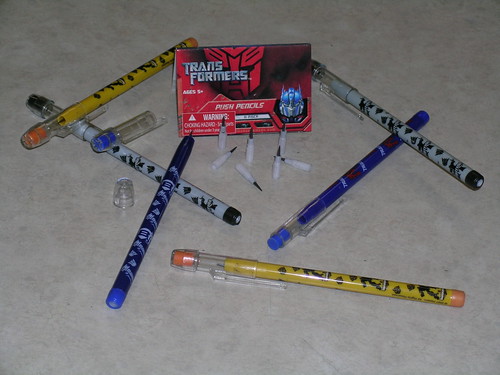 Oddly enough, the one set of branded pencils that I remember the most from my childhood were Transformers pencils, Megatron pencils to be more precise. I think I ended up playing with the lead nibs more than actually using them for writing, and I was always jealous of the girls who had similar pencils because they were usually made of scented plastic (which is actually kind of weird when you think about it.)

The thing I hated about these pencils was when I’d loose one of the nibs, which were scientifically measured so that there would always be enough to keep the lead out and tight. When you lost one you’d have to fashion a new nib by stuffing a piece of crumpled paper in the pencil tube and you had to hope it didn’t get jammed in there.

When I saw these in Target it made me think about how interesting it is that the kids I grew up with in my generation are now definitely out in the work force, influencing marketing decisions and such, because who else would have thought to merchandise this style of pencil? I haven’t seen a set of these push pencils since middle school. In fact I was actually kind of surprised and a little sad that there weren’t any figural erasers to go with these pencils, but honestly, even for a buck I probably wouldn’t have bought them.

Collecting the Art of G.I. JOE

Is it really the Dolls?