So during my trip down to Florida this past weekend, like every other trip down to Florida I take, I was in and out of 7-Eleven’s on a crazy thrice a day schedule. You see since I don’t have any of these bastions of sticky, kind-of-groady, yet oh so lovely convenience in my area of Georgia, I don’t have access to Slurpees, my drink of choice throughout the majority of my childhood. To balance this, I make it a point to get a Slurpee at least three times a day every day I’m in driving distance of a 7-Eleven. If I ever moved back to Florida, I’d have to grow approximately 32 extra arms to enable me to shift and move what would soon become a body of gargantuan and Jabba the Hutt like proportion. I’m sure I’d also start lactating a suicide-like mixture (many flavors mixed for those of you who didn’t play little league in the US) of Slurpee as well, so I’d just be a huge, many-armed, cold and tasty mess. Wow, that’s gross.

Anyway, as I shuffled into my first 7-Eleven of the trip I realized that I was going to be in for a really great Slurpee chugging experience as I noticed first and foremost that one of my weirdly all time favorite soft drink flavors, Jolly Rancher Watermelon, was now available Slurpee style. Even though the actual sodas seem to have been pulled from the southeast market, some gods above saw fit to give it one last hurrah as a Slurpee flavor, and indeed it certainly didn’t disappoint. 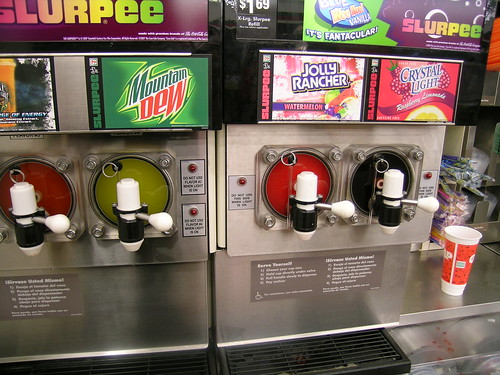 I believe over three days I literally drank my weight in JR Watermelon Slurpee. What’s funny is that while obsessing over the new flavor, I completely neglected to notice that the Slurpee machine had been re-branded for a Simpson’s the Movie promotion into a Kwik-E-Mart Squishee machine! 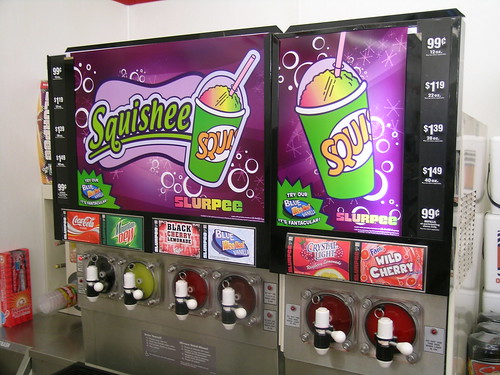 It wasn’t until my second visit that the whole Simpson’s branding really caught my eye as I noticed that the Big Gulp machine was now sporting some snazzy Buzz Cola signage as well as the Slurpee machine. Unfortunately, Buzz Cola wasn’t on tap, but there was some small print on the sign that directed me to the drink cooler where I could find plenty of over-priced cans for my purchasing pleasure… 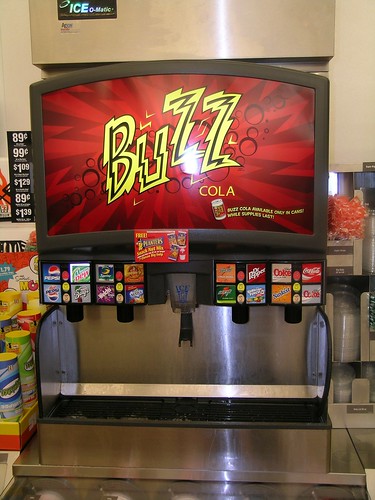 At first I was thinking that this must be some sort of Jolt Cola promotion, as I really don’t remember Buzz from any specific Simpson’s episodes (I guess I’m more visually inclined to spot Duff beer or Squishees.) The can is pretty swanky though in it’s very cartoon inspired simplicity. When you compare it to the incredibly loud and crowded design work on most Coke and Pepsi products, it’s almost tame, even with it’s lightning bolt font that’s half the size of the can. 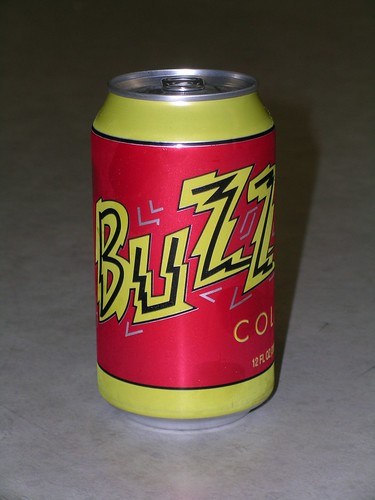 In fact, even on the back there isn’t much other than a small Simpson’s the Movie logo, a UPC and some ingredients. It’s distributed by the 7-Eleven corp., which has had store brand cola products in the past, so I’m assuming they manufacture it as well. As for the taste, like Matt over at X-Entertainment noted, it’s very much like RC cola, lacking the crispness of Pepsi or the syrupy bite of Coke. It’s more mellow and almost flat tasting, but it’s very suited to a drink like this. I’ve always thought Jolt tasted much the same. 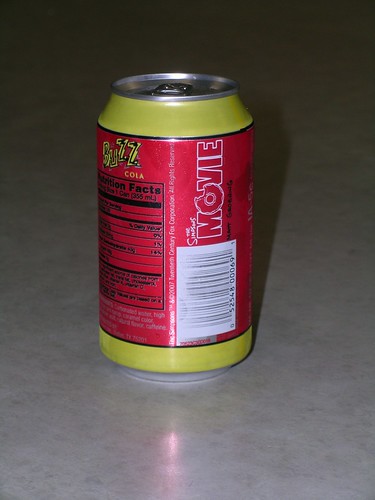 In addition to the drinks, the Simpson’s branding wormed its way into other common 7-Eleven products, like their donuts. In honor of the movie the store is offering it’s plain donuts with a hot pink icing and sprinkles, which even though it seems common enough it actually kind of rare. Most of the donut places by me don’t offer pink iced donuts, unless it’s Valentine’s day, so these were pretty fun to see on the shelf (and apparently a lot of shelves are bare, so I guess I was lucky in Fl.) 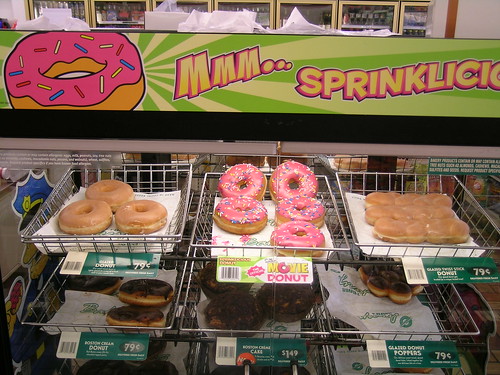 Also on the shelves were boxes of Krusty-O’s cereal, though I had a hard time snagging a picture. After walking around secretly snapping photos of all the Simpson’s schwag, it was next to impossible to get a clear shot of the cereal because it was right in front of the main counter and there were three employees and a customer that were giving me very incriminating glares, so I wussed out and put my camera away. I was going to pick up a box, but it seemed like a waste since I don’t particularly like cereal all that much.

It wasn’t until visit number 5 at a different location when I spotted yet another new Slurpee, excuse me, Squishee flavor that was directly tied into the Simpson’s promotion, Blue Woo Hoo Vanilla. That particular location must have just changed it out because what I was pumping out was hardly blue (it’s was more of a plum), but it was very vanilla-y, so I assume there must have been a red Slurpee flavor in the machine prior. It was pretty darn good as a change from the normal fruit and soda flavors, and it was cool to see a flavor that wasn’t co-branded by a soda company (remember, it’s not Cherry, it’s Fanta Cherry.) 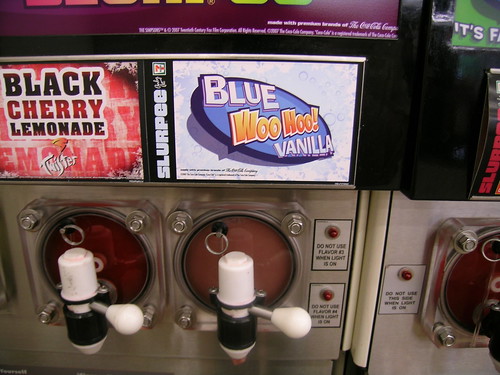 It was also at this point when I began actively collecting the various Simpson’s Squishee collector cups. There were six different in all, 1 small paper one that just had the Squishee logo, and five more that were a little bit larger, plastic, and had the Squishee logo on one side and a family character on the other. I don’t remember ever seeing a Maggie cup, so I guess she was dissed promotion wise. There are also crazy spoon straws that have rubber cutouts of the characters that magnetically stick, but they were a $1.50 extra, so we largely passed on those. 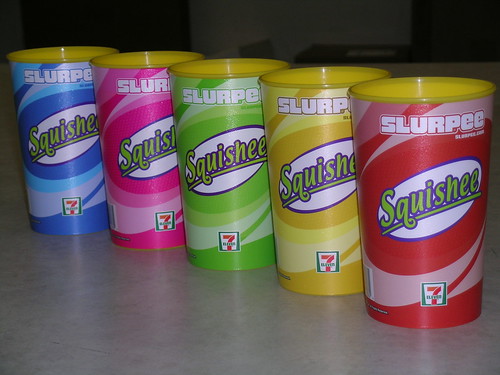 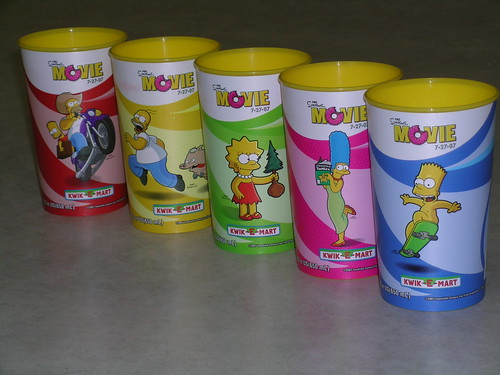 All in all it was a pretty awesome time to be visiting 7-Eleven’s and I walked away with a much lighter wallet, and a ton of pointless schwag that will probably be regulated to a box in the closet in the coming months, but it sure was fun.