Wow, it’s been quite the hectic week around here. The wife and I took a trip down to Florida to see family and the last 5 days have been a whirlwind of driving, walking, driving, taking pictures, and more driving. We took a family outing to Epcot which was pretty awesome since I hadn’t been to that theme park in about 22 years, and I got the chance to introduce my family (well my parents at least) to Indian cuisine, which was fun. While we were down there I stumbled upon an awesome 7-Eleven Simpson’s the Movie promotion that I’ll be writing about soon, as well as some odds and ends in the weird food department.

Right now I think I’ll take a minute to catch up on this week’s Peel Here though. So what’s on the hopper this week you ask? Why it’s a few packages of Silverhawks puffy stickers from 1986. Silverhawks was one of those weird cartoons that came a little later than the more popular fare (like Transformers, Kidd Video, G.I. Joe, Voltron, Jem and Thundercats) and seemed to amalgamate portions of these earlier cartoons into one crazy monster of a show. You had a team of top notch military recruits (ala G.I. Joe) who had space armor and sort of switched for humanoid to a metal human/bird hybrid (kind of Transformers-ish) which battled against a band of evil aliens led by a shape changing crazy guy Monstar (ala Thundercats and Mum Ra.) There were two characters with dueling guitars as weapons (very Jem or Kidd Video-like), and all of the silver hawks banded together into one awesome space jet to fight as a team (very Voltron.) When I was a kid though, this was the lat thought on my mind if I even noticed these similarities at all. I’d ride my bike home as fast as I could because the cartoon started only a half an hour after school ended, and I didn’t want to miss the opening credit sequence. For some reason the Silverhawks theme song was super burned into my memory and I’d unconsciously sing along to it. 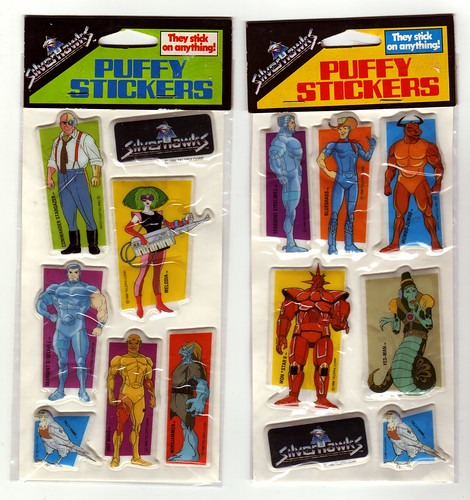 The first thing I noticed about these four packs of stickers is that there is one of the original Silverhawks missing, Steelheart, who was a girl and I believe the sister of Steelwill, the jock looking guy. Now there might be a fifth package of these puffy stickers that I don’t have, but so far my experience with these stickers is that they either came in sets of two or four, so there’s a good possibility that they decided to leave her out. Now I realize that the show was more geared towards boys, but I think it’s sort of a shame if that character got snubbed because she was a girl. You tended to see that with G.I. Joe and Transformers as well. There were only a handful of girl characters in G.I. Joe, and of those you hardly ever saw their figures in the stores (though either Scarlett, Lady Jaye or the Baroness seemed to be in every single episode.) In Transformers there were no female characters until the movie came out (Arcee), and even then she never got a figure in the initial run of figures. Anyway, enough of my feminist cartoon ranting, lets get to talking about the stickers we do have. Between the four sets the designers managed to get almost every major character represented, even both visages of Monstar. My one complaint is that the poses they chose are either weird (profiles) or just static. There are a couple of characters that get a little more dynamic, Yes-Man and Harware in particular seem pretty natural, but most of the characters are stiff. In fact it’s almost as if these were ripped from the cartoon model sheets. 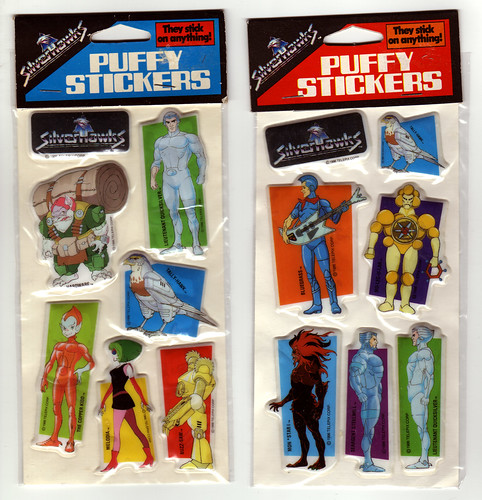 I was also a little disappointed that there was no Mirage sticker (the coolass Silverhawks Jet that Bluegrass piloted), yet the designers chose to include a Tally Hawk sticker in every single package. There were other mechanical pet birds that were ignored in favor of Tally Hawk as well which seems a shame.

I am glad I found these though. I’m not sure how long the show was on (I’m thinking only one season) but there didn’t seems to be all that much merchandising for it, at least not that I was aware of at the time. I had a couple of the toys (and since my Quicksilver figure didn’t have a visor mask that dropped down I used to twist his head backwards and pretend like he put his mask down) and I remember a Burger King promotion because I had some sort of Copper Kid trinket from one of the kid’s meals, but I don’t remember much else.

Next week on Peel Here … um, I have no idea what I’ll be sharing. It’ll be a surprise for everyone, me included. Until then, I guess you’ll just have to wait.

Flip that last issue of Dynamite magazine to reveal an issue of Arcade!