Peel Here #33, In space, no one can hear you collect these sticker cards!

Growing up I watched a lot of movies, a least when I compare my list to the people I know well; I mean I’m no Harry Knowles or anything. So what I’ve begun to notice in the last few years is a weird trend in my nostalgia for childhood movies. There is a strange delineation in how I feel about the movies that I remember seeing from about the age of 13 on. When I look at my DVD collection I think I pretty much own most of the flicks I saw before I turned 13, good, bad, or indifferent, there just seems to be a special place in my heart for these flicks. After 13 for some reason it was a lot easier to just say "meh" when I saw something that, if I’d seen it a couple years earlier I would have absolutely flipped for.

Case in point is my feelings for the first two Alien films. I saw these films out of order, watching Aliens late one night with my mother in one of it’s million airings on HBO, but I didn’t catch Alien until around the summer I turned 14 in 1991. I adore Aliens, but for the longest time I’ve just sort appreciated Alien, not really loving or hating it. Personally I think this is odd because I’m more or less predisposed to loving everything about the film; I love horror, trilogies, 70s sci-fi, Harry Dean Stanton, Ridley Scott, and for the most part H.R. Geiger. I’d also like to believe that my feeling don’t stem from a common rift between the fandom of the two flicks, namely that Alien is slower and more of a suspenseful horror flick, while Aliens is more rooted in Sci-Fi and is action, action, action and therefore possibly more "fun". I actually think Alien is a better film, yet if I had to save one or the other from a burning building, it would be Aliens. In fact it’s this gut reaction that leads me to believe that nostalgia is really the deciding factor here. When I think of Aliens, I remember a piece of my childhood, yet when I think of Alien I just remember stuff like starting high school, which is definitely outside of my nostalgia zone. I wonder if this is slowly going to change over the years or if I’ll still be pretty comfortable drawing the line at age 13? Is nostalgia simply a matter of time passed, or is it something special about the time in question?

So I’m sure you’re asking yourself, "Self, why is Shawn babbling on about all this in a Peel Here column?" Well, it’s because this week I’ve got an almost complete set of the 1979 Topps Alien sticker cards to share and when ever I’m dealing with this flick, first and foremost I always wonder why I don’t love it as much as I think I should. 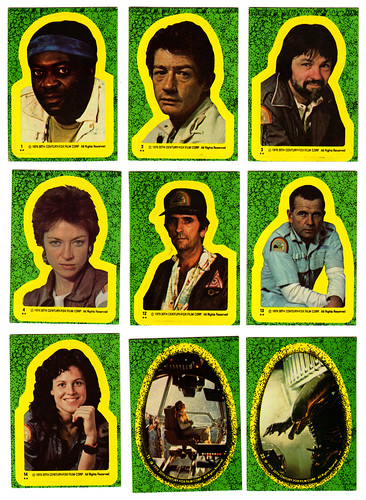 This set was pretty awesome because it was merchandising a movie with a large cast of actors, none of which were the focus, so each had an equal share of screen time for the most part. All of them get a portrait sticker in that awesome poppy Topps style.

1979 was an interesting time for the Topps trading card company as it saw a slight shift in their design of non-sports trading cards. I think there was a decision, consciously or not, to shift the sets towards a more collectable design, so you saw them dropping aspects like speech bubbles on the basic non-sticker cards, and adopting more collectability trends like puzzles on the sticker card backs. It became more about completing a set than having fun with what ever cards you did purchase. In just a couple years you’d also see a trend towards more stickers and less cards what with sets like Supergirl, which had two to four times as many stickers as the normal sets and also tried to work in the scene by scene story of the normal cards to the sticker card backs.

These Alien stickers mark the transition between sets like Mork and Mindy (which had blank sticker backs) and Buck Rogers (which had a puzzle poster.) The Alien stickers didn’t have a puzzle yet (though what an opportunity missed, can you imagine how cool it would have been to have a large image of the creature), but then did start utilizing the space on the sticker backs in a way that I haven’t seen Topps do in other sets, they placed inter-company ads on the cards. 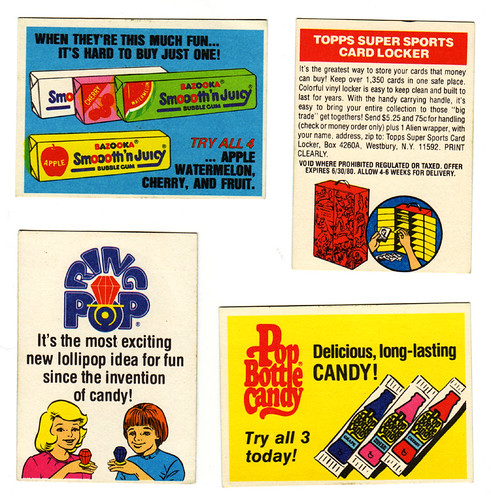 You get ads for Bazooka gum, Pop Bottle candy, Ring Pops and a Topps branded trading card carrier, another staple of the by gone 70s and 80s (like those large molded plastic carrying cases shaped like Star Wars character busts or the overly large G.I. Joe utility belt where you could store your figures.) I think these are pretty cool, and I never realized that watermelon flavored candy was big in the late 70s. I thought that was a product of the 80s. Similarly I didn’t realize there was a "smooth & juicy" version of Bazooka gum, I was weaned on the regular sort of hard individually wrapped chunks you bought by the pack or the pound. Smooth & Juicy in apple flavor no less! Why aren’t candies apple flavored now? Its always green apple flavored or extreme, sour, tingly, melt-your-head green apple flavored. I always thought cherry was to candy as apple was to juice, but you think apple would dominate all categories of fruit flavored items if only because of its relative cheapness. 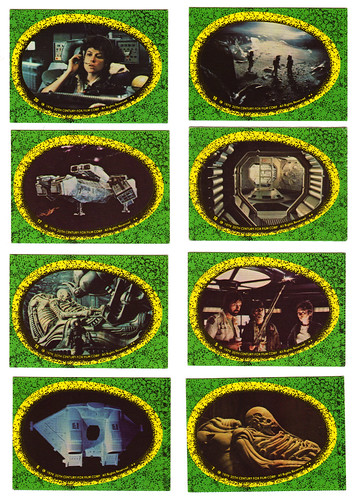 As for the non-portrait stickers Topps went with a pretty nifty egg shape outline, which beats the hell out of the odd isosceles trapezoid design on the Buck Rogers cards. I also dig the green and yellow color scheme even though neither is really featured in the movie. I also really like most of the scene choices for the stickers in which we get shots of all the vehicles (well at least the Nostromo and the escape pod), primary landscapes, some "team shots" as well as being suited up for the planet walk, an Alien still, and what’s really cool is both a practical shot and a painting of that large weird skeleton/husk/body that the crew found on the derelict alien ship. I’ve always been insanely curious about this creature and the ramifications it has on the universe of the Alien films, the idea that there are other races and civilizations out in the cosmos yet it’s not really addressed in the franchise (unless you count Aliens Vs. Predator, which I don’t because I really didn’t care for it.) I thought it was a hugely brave decision on Ridley Scott’s, Dan O’Bannon’s, and Ronald Shusett’s parts to introduce this creature and ship and then abandon it for story purposes. I love this kind of red herring back-story in movies. 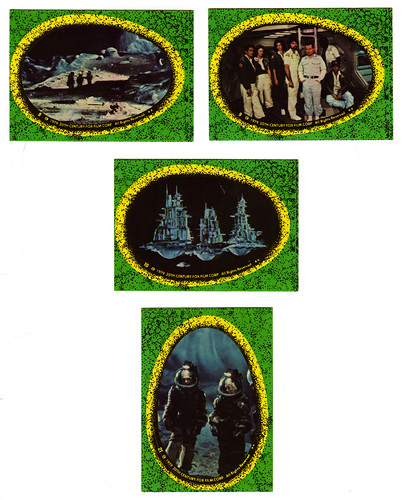 Of the 22 (there’s that Topps multiple of 11 mentality coming in again) sticker cards, I’m only missing number 18, which besides the corridor sticker above is actually probably pretty boring. Jeff Allender’s House of Checklists has it listed as "Asteroid Colony Design". I managed to find this set for $0.10 plus shipping, so I’m not complaining or really missing that sticker much. I guess I’m immune to the Topps collecting bug.

Next Week on Peel Here, The Silverhawks!