You’ll Shoot You Eye Out Kid!

I noticed that a weird trend in comic book advertising at the beginning of the 80s, a concentration of BB gun ads. At first I didn’t think much of it, but as I stumbled upon more and more ads it seemed like they were becoming more and more disturbing. I’m certainly not anti-gun or anything, but these drawings of fathers snuggled up close to their sons who are intently aiming their Red Ryder’s at some can or tree stump off panel is kind of weirdly creepy to me. 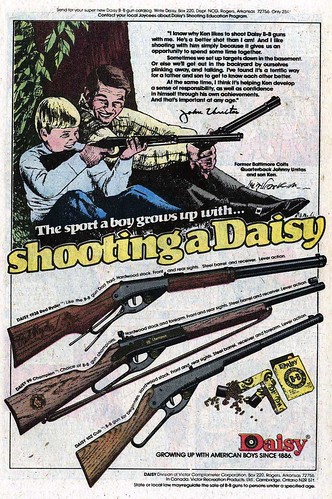 A couple of these Daisy ads feature former Colts quarterback Johnny Unitas and his son, and they aren’t all that bad. There’s some father-son bonding going on, very picturesque and it reminds me a lot of the relationship between Ralphie and his father in A Christmas Story. Ralphie just wants an Official Red Ryder carbine-action two-hundred-shot range model air rifle with a compass in the stock, and this thing that tells time, and on Christmas morning, there it is behind the desk, carefully wrapped and hidden so that the mom wouldn’t know (’cause we all know he’ll just shoot his eye out right.) I guess since I didn’t grow up with guns, the imagery is just a little off for me.

Hell, I wanted a BB gun just as much as the next kid and I bothered my parents for one for years just like Ralphie. They finally succumbed when I was about twelve and picked up a cheap Marksman air pistol, a model that I bet a lot of kids were saddled with because of its price and how easy they were to find. I was in a state of rapture for months. Not only was it a pistol as opposed to a rifle (I’m more of a handgun guy when it comes to aesthetics I guess), but also it was solid metal and must have weighed like 4lbs which made it feel all the more real. Though I always sort of missed it having a "clip" that I could slam into place, I was unending impressed by the faux slide assembly style of cocking the pistol. You pulled back on the slide (though it was only on the back half of the pistol and not the entire length of the barrel) and had to push it back hard to compress a spring or something. It was actually a really horrible gun with seriously bad accuracy and cocking it required the combined strength of Hulk Hogan, Andre the Giant, and a steroid enhanced puma, but I loved it nonetheless. So on the one hand I completely understand where these ads are coming from, but on the other the pictures and ideas presented just seemed wrong to me. 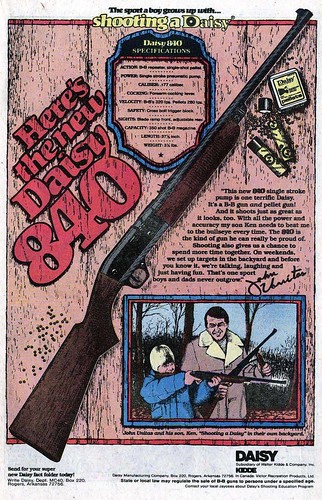 In this first Crosman ad there’s nothing more going on than a kid cocking his trusty BB rifle as he stares down lovingly at it, but I think it’s the gist of the ad that bugs me. The Crosman 788 BB Scout is apparently made for the kid who isn’t old enough to operate a normal sized rifle. "Hey parents, if the kid can’t handle it should he wait until he can, or should we make a designer version molded specifically for his little hands? Yeah, that’s what we thought too, and that’s why we’re now considering a partnership with Tonka to make a tiny but durable molded plastic rifle, complete with carbine action and a 150 BB shot capacity." Can’t let the toddlers run out of ammo, at least that’s what my grandma used to say. Seriously though, it just seems weird to me to be modeling guns for kids too young to handle what is effectively a middle school aged kids weapon. 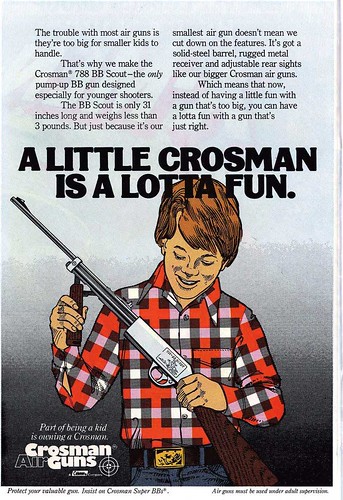 Then comes the craziness. Setting up a BB gun range in your living room or basement? Really? My mom wanted me to keep my pistol in the garage for crying out loud. Honestly the mom in that picture looks like she’s quietly opposed to the whole thing. The ad does kind of have a nice "shoot your TV" kind of vibe to it though. "Hey Mom? You need to hole punch that piece of paper? Don’t worry; I’ll get it with trusty blue here! Pa-Ting!  Hey sis, that pimple still bothering you ’cause of your big date with Davy Jones from the Monkees? Don’t worry; I’ll shoot the puss out if it from 40 yards, I’ve been practicing on the dog! Heck, I’m getting so go with this thing I can change the channel and adjust the rabbit ears with it!!!" 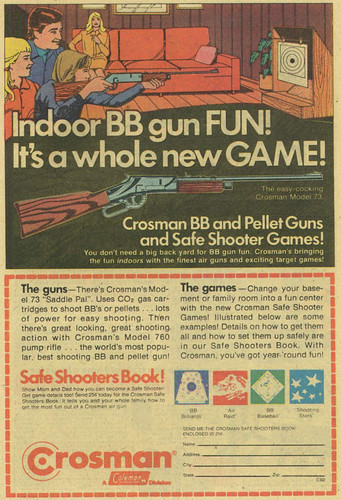 For some reason the most disturbing ad for me is this last one with a father and son making camp and in the dark, by the fire the kid is wiping that gun down after a fine day’s shootin’, all decked out in the free Daisy swag he’s managed to acquire. Like I said, I know this is probably just the stupid PC-ness of our modern society that’s pervaded my thinking, but the picture is just creepy to me. 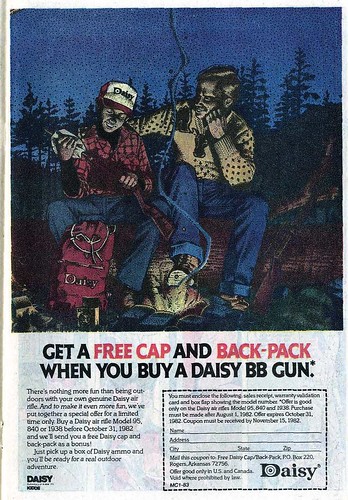 "I shot that can good Dad, didn’t I"  "Yeah, son, you really pinged the hell out of it, I’m so so proud of you." Shudder. I guess it’s sort of like watching that early first season episode of Dif’rent Strokes where Mr. Drummond has just punished Arnold and then Willis gets upset and runs to take a dip in the whirlpool. Mr. Drummond comes in, has a heart to heart with him and then there’s a big make-up hug, a big half-naked, wet young boy and older adoptive father make-up hug that seems so wrong, even though at heart it really is sweet. The times they are a-changin’…

These Should Exist: The Young Guns Edition

These Should Exist: the Young Guns II Edition