When I was scanning the Madballs sticker sheet this past weekend it reminded me of a Bonkers candy ad that came out around the time I started collecting comics.  That led me to digging through some of the scanned comic ads I’ve acquired and as I was searching for the Madballs ad (or at least what I thought was a Madballs ad) I thought it would be cool to cobble together all of the Bonkers candy ads I had on hand.  I’m not sure how many ads there were over the years, but I found 6 that represent a nice three year period in the 80s.

For those not familiar with Bonkers candy, it was a Starburst-like fruit chew made by Nabisco under their Life Savers subsidiary in the 80s and 90s.  The candy was packaged similarly to Starburst as well, individually wrapped in a long sleeve, but instead of coming in a mix of flavors, each sleeve had only one.  They were a little bit softer than Starburst and were shaped more like a chunk of gum (think Hubba Bubba or Bubble Yum) and were made up of two sections, an outer layer and a more intensely flavorful inner layer, both usually of the same flavor variety.  It originally came in three flavors, Grape, Orange, and Strawberry, but would eventually be available in a few others, as we’ll see below.  The product’s tag line was that it was the candy that would “Bonk You Out!”  The oldest ad I could find in my collection was from 1984 and it looks like it was introducing the initial product line. 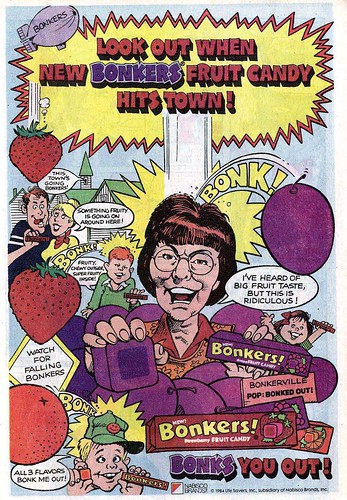 The cool thing about this ad is that it looks like it was drawn by Jack Davis (he of EC comics and MAD Magazine fame.)  Davis did a bunch of advertising artwork throughout his career for but I still find it kind of weird and interesting to see someone’s art who I am familiar with in comics on mass produced products advertising like this.  It’d be like seeing Todd McFarlane doing a Capt’n Crunch ad or something (I bet those Soggies would have been pretty damn cool.)

I was way into Bonkers during my elementary school days.  There was a 7-Eleven at the opening to our subdivision (which was about a mile from my house) and I’d always ride my bike up there after school and on the weekends to play arcade games, drink Slurpees, and to load up on pocketfuls of Jolly Rancher sticks, Nerds, Runts, and Bonkers.  I’m sure watermelon was my favorite flavor, but I know I had my fare share of the three original flavors as well. 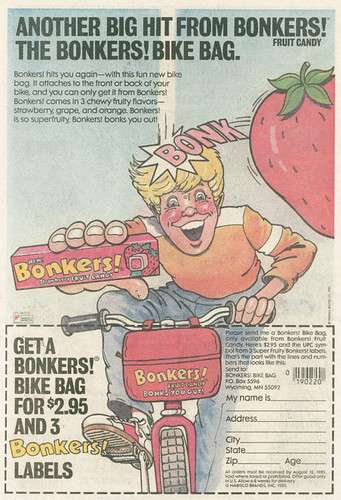 This second ad is from 1985 and is more of an order form for a bike bag premium.  By this point they’d certainly come up with their advertising campaign idea of having giant fruit falling down on whoever eats the candy (which made for some fun commercials in the 80s.)  This ad also looks vaguely like a piece of Jack Davis artwork, thought I’m wondering if it wasn’t bastardized by someone else.  The kid just looks too happy and it lacks that sketchy hand that Jack has.  Maybe someone at the ad firm finished a doodle of his or something.

With this next ad from 1985 introducing the new watermelon flavor (which was the big new candy flavor that was sweeping the nation in the second half of the 80s) the art, though retaining a certain Jack Davis quality seems to be diverting even farther from his style.  I’m not positive but I’d have to believe that at this point the in-house Nabisco art guys were talking over. 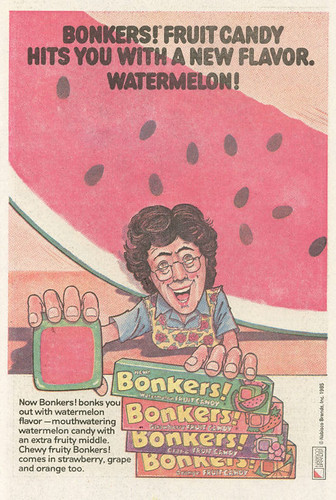 With the new watermelon flavor Bonkers took a deviation from the normal candy design and went with two colors to more accurately mimic the watermelon eating experience (though as my Mom always told me, eat the rinds and you’ll get the runs.)  When I was reading through other blogs that had Bonkers candy posts there were a couple of people who seemed to remember a version of the candy that was yellow and red (which they figured was probably Strawberry Banana) so I’d have to think that if there was such a variety (which I think there was) than it probably came after Watermelon was introduced.  Of course there were also a few brands of bubble gum that were experimenting with double flavor combos at this time and if I remember correctly they were also shaped like Bonkers (or vice versa) so we all might be remembering that as well. 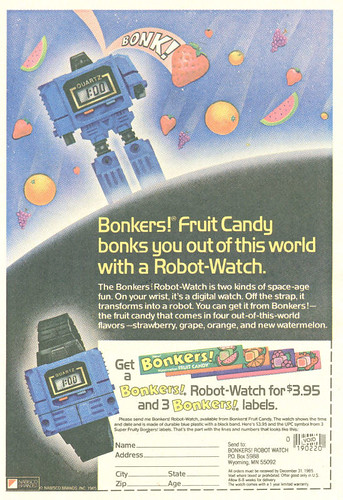 1985 would also introduce another Bonkers promotion, but this time instead of a silly bike bag, this time you could earn a kickass freaking robot watch (Kronoform watch to be exact.)  God did I love these robot watches to hell and back.  I must have had at least three of ’em in various colors (one of which I think was even Transformers branded.)  These watches were the perfect camouflage for bringing toys to school and they were proven to be 92% less likely to be confiscated by the teacher.  I learned a powerful lesson in the 1st grade when I brought a bunch of my Empire Strikes Back figures to school one day and went home minus a Bespin Luke, an Ugnaut, and my Hoth Leia.  Even if the teacher did catch you with one of these watches, it’s not like they were going to take your watch away.  How would you know when to wait out front to get picked up or when 15 minutes had passed during recess with out a watch?  Hell, kids are stupid, if you tell them they have five minutes to take a potty break and you confiscate their watch they’ll probably sit on the can all day thinking only four minutes passed, I know I would.) 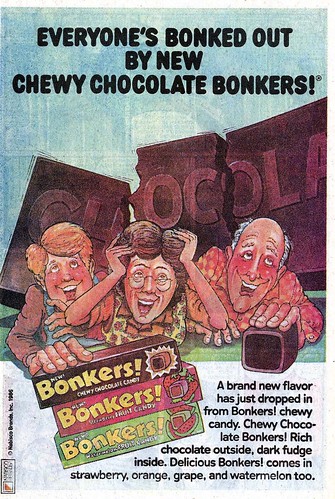 In 1986 there was an interesting if not somewhat disgusting (well to me at least) development in the Bonkers camp, Chocolate Bonkers.  I am seriously not a big fan of chocolate flavored things.  I mean, if you want to eat chocolate, eat chocolate.  The worst is chocolate bubble gum, which just seems like a nightmare made real for my chewing displeasure.  Chewy chocolate should be copyrighted by Tootsie Rolls andyway which is about as far in that direction as I’m willing to go, and even then only for a roll or two.

This all brings us to the reason I started this post, which is the 1986-1987 Bonkers Ugly Balls promotion which coincided with the Madballs craze and had a lot of people like me confused figuring they were one and the same. 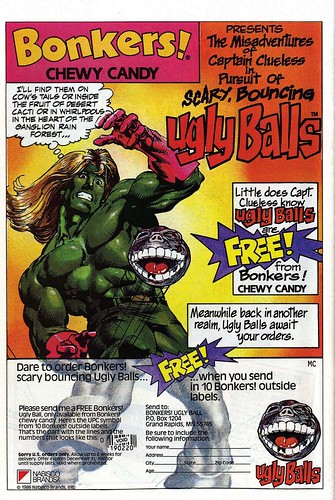 Matt over at X-Entertainment did a nice write up on the whole situation, and he even has a bunch of the related commercials for eyeball melting viewing pleasure.  Captain Clueless always weirded me out because for such a clueless guy he sure did look like he could pummel the ever-living crap out of me.  And the blonde hair always seemed weird too, with the red gloves and stuff, he looks like a weird amalgamation of the Hulk, Fabio and DC’s the Creeper.

PCP Spotlight #5, can you heat the howl of the Claymation Werewolf?

Wait, there are four Ghostbusters?!?

From the Archives: The Pee-wee Herman Muppet Magazine edition…