Finally, after a month of waiting, I have my own car back from the shop. The paint job looks great again (as it should for the frickin’ price my insurance company paid, which makes me wonder what in the hell kind of paint job you’d get at a Maaco for only a few hundred dollars) but more importantly I’m in my own comfortable car again.  I never realized how much I’d miss driving it, but our rental was very small and had the worst blind spots known to modern car design, so that could account for some of it.  I’m also floating on air a little bit because this past weekend I got an opportunity to play a board game with a bunch of friends that I haven’t sat down with for 20 years.  For now I’m gonna leave it anonymous because I’m going to write about it here soon, but playing it brought back a lot of memories of the 80s and how weirdly freaking consumerist the nation was becoming.

So what do we have this week for Peel Here column number 31?  Well a small-ass sticker book for one helluva big-ass truck, the Antioch Publishing Bigfoot 4x4x4 Facts & Photos sticker book.  I’ve talked about my weird affinity for these little square books with "12 Collector Stickers Inside" before, they definitely represent the 80s in my mind, and in particular this book because it serves as a snapshot for a sort of shift in the general mindset in America at the time.  While in the 60s and the 70s there was (at least what seemed like) a greater importance placed on pop culture and consumerism where the two began to reflect and directly challenge politics and other more serious issues (music taking on the establishment, counter culture movies, etc.), in the late 70s and through out the 80s (all the way to today sadly) pop culture and consumerism became the news, it was politics (Regan began his "career" as an actor), and suddenly knowing just how many pairs of shoes Imelda Marcos owned was a serious issue (kidding, though only a little folks.)  So while in the 70s Evel Knievel was a household name for using motor sports as entertainment where the slight possibility (though no one really wanted to see him fail) of crashes and injury were a draw, in the 80s and with the Bigfoot monster truck we had an era of crashes and destruction eschewed in where no one was happy unless cars were destroyed and the possibility of danger and injury was imminent.  The possibility of going to a monster truck show and losing your hearing was a positive thing.

Now I’m not knocking Bigfoot or the whole monster truck experience in particular, I was just as addicted to the idea of Bigfoot and Grave Digger as anyone else, but it does make for a pretty good turning point in the decade shift where outright destruction and the biggest loudest trucks became popular.  I know that there were already demolition derbies and stuff, but nothing that ever reached the popularity of Bigfoot.  Waste and luxury items for one and all was en vogue, and your place in life was judged accordingly.  Sadly nothing has really changed. 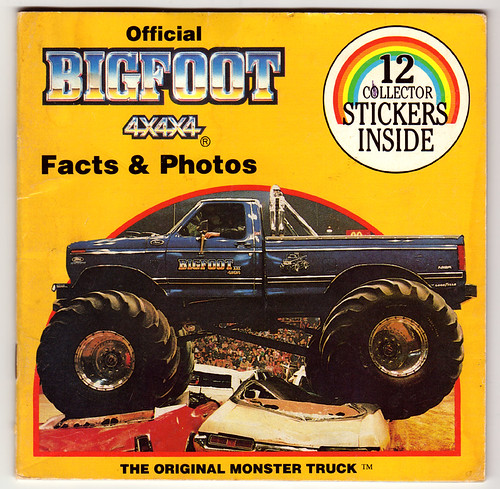 This is getting a little off topic though, so lets shift back to the stickers and try not to think about social commentary.  So the book is called Bigfoot 4x4x4, and if you know your monster truck trivia you know that the 4x4x4 stands for any vehicle that has four wheels with four wheel drive and in addition (and this is what makes it special) four wheel steering so that if the front axle goes out, you can put a pin in it and steer with the back wheels.  This was the advance in design that led to the first Bigfoot being manufactured, and it was the beginning of an empire of motor sports that was merchandised to hell and back.  Not only were there stickers, but also a set of trading cards, innumerable toys (the Playskool version of which I had as a kid), and even a Saturday Morning Cartoon, Bigfoot and the Muscle Machines.  Bigfoot also made appearances in flicks like Take this Job and Shove It, Cannonball Run II, and Roadhouse, not to mention plenty of TV shows.  A whole industry popped up around the idea of Monster trucks and there were tons of derivative merchandising from stuff like The Animal, the Truck toy that had animal claws hidden in the wheels that would pop out for extra traction, to stuff like Jayce and the Wheeled Warriors, which is basically Bigfoot in space (vs. plants, but that’s a story for another time.) 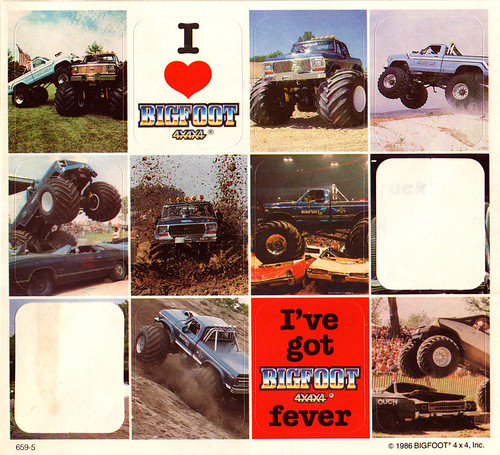 The stickers that came with this book were pretty cool if only because there were 12 different stickers instead of the normal 6 that were provided with duplicates.  There are two missing in the book I managed to find, which is actually pretty good for these books seeing as how the stickers would be the first thing to go, and from the context clues of the sticker void borders I can guess that one had Bigfoot hauling ass through a pond, and the other was of the version with the 10′ high tires (which is pictured below, in fact I think it is the picture from below.)  There were also a couple of the obligatory I (heart) stickers which were pretty darn big in the 80s.  The one sticker I love the most though is of the small monster truck that looks like it’s trying to mount Bigfoot, which is just weird.  There’s also a nice shot of the Bigfoot shuttle on the bottom right, which was a different design but made by the same team of people. 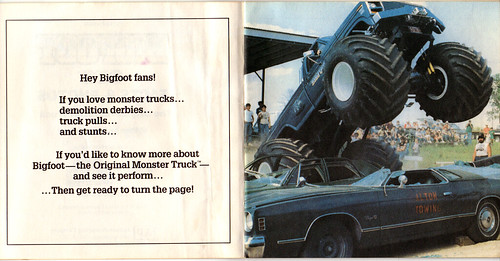 The book opens with a bang, and plenty of exclamation marks to knock home just how exciting this truck is, not to mention exploring the idea of Action Page Turning! 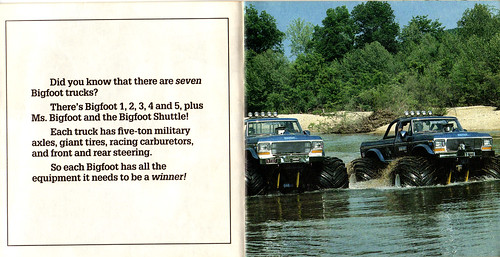 Did you know that 22 years after the publication of this book that there are actually like 19 or so Bigfoot trucks (or is it Bigfeet?)  Though I can understand the various clone trucks with the augmentations, but constructing a clone truck for the purposes of showing it in multiple places at once is capitol "L" lame.  When I was 12 my dad took me to a car show because the actual Batmobile from the Burton movie was on display.  It was awesome.  I also had a friend that managed to get a chance to get a photo standing next to Airwolf (one of the operational ones used in the filming of the show) which is like 10 times as cool as the Burton Batmobile.  If either of us found out that these weren’t the actual vehicles it would have just really sucked.  It reminds me of all the little kids I’ve seen over the years getting their comics signed by various guys in Spiderman and Spawn outfits at comic conventions.  You just don’t have the heart to tell them that "No, that really wasn’t Spiderman.  Seriously kid, I saw him taking a dump in a door-less toilet stall and he was on his cell phone talking to his uncle, and it sure as hell wasn’t a collect call to heaven he was making, so you know…"  So when you’re going to some Planet Hollywood or the monster truck version of Medieval Times just remember, that’s probably just a big-ass truck that’s never crushed a car in its life.  Come to think of it, a monster truck version of Medieval Times would be super rad. 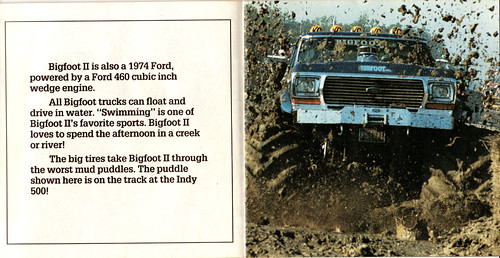 I don’t think I understand the author’s use of exclamation points here.  "The puddle shown here is on the track of the Indy 500!"  Um, what’s exciting about that?  I think there should have just been one 500-point font exclamation mark on each text page, which would get the point across, "YEAH BIGFOOT!!!" 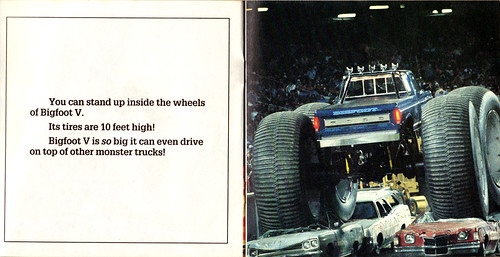 They should so make a Bigfoot with the tires so big that the Atlantic Ocean would be like a puddle.  Australia could be where it lived (in the outback), and it would help to cur the ever-rising Kangaroo population.  That would be the one that Jesus would drive.  They’d have to rename it GODfoot though. GODfoot vs. Grave Digger at the GA Dome tonight, WOO HOO!!!

This is how my childhood ends, not with a whimper but a BANG!