Man, what a weird freaking month it’s been.  I can’t wait for everything to start calming down, hopefully by the end of this week when I’ll hopefully finally have my car back from the shop (stupid vandals) and will have gotten back into the daily grind at work.  I swear, sometimes it feels like I’m trapped in this weird therapy session between me and life and the doctors has just given us both those foam rubber bats to get our aggressions out, but life always gets the one with the stainless steel pipe in the center whereas mine has a wet paper towel roll tube in the center.  It’s at times like this when I revert back to my middle school era mindset and I imagine threatening life with crazy stuff like: “If you try and beat me up again I swear that I’ll drop my pants and pee on you!”  Threats like that don’t age very well.  I can say that I never got into a fight in middle school so I never had to act on the threat, though I did get some funny looks.

Anyway, I’m not here to talk about peeing on bullies’ legs, I’m hear to talk about stickers, and talk about stickers I shall do.  I’ve been waiting awhile to get to the subject of this week’s Peel Here, almost a year in fact.  I’ve been sitting on it for a couple of reasons, one because I didn’t acquire this set of stickers until recently as it’s both sort of rare and pretty expensive for stickers, and two because I wanted post about it in a timely fashion with the release of an awesome DVD set that streets today, 6/5/2007.  So what is this fantabulusly amazing set of stickers that I’m so stupidly excited about sharing?  Why it’s the Donruss CHiPs sticker card set from 1979. 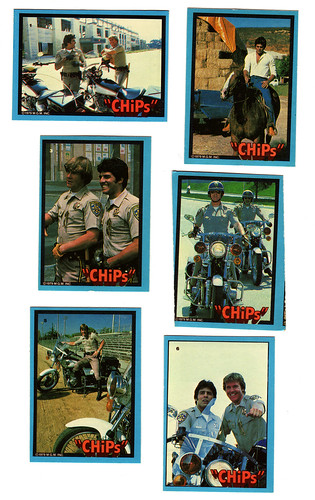 I’ve had a very strange obsession with CHiPs since I was a wee little kid.  I think it’s because, like Star Wars, I was ushered into the world at the same time as the show, so for the first six years of my life there were always two constants, CHiPs and Star Wars, one grounding me in reality on TV and the other lifting my head above the clouds in space.  It was also the show that weaned me on hour long action dramas in the 80s and would lead to a steady diet of Airwolf, the A-Team, Knight Rider, the Dukes of Hazzard and Street Hawk.  There was always something really cool about catching an episode of the show because I was young and was rarely allowed to stay up and watch it.  When it started coming on in reruns it mostly aired during the day when I was at school, so it became an even rarer event, and would eventually be the cornerstone of my staying-home-sick TV watching.  Being sick as a kid meant that I’d get to stay home and watch CHiPs, the Love Boat, Gomer Pyle, Bewitched and Alice.

It also doesn’t help but bolster my nostalgic love for the show that my friends and I went through a tiny obsession with Erik Estrada in high school after learning that he was on a Mexican soap opera, Dos Mujeres, Un Camino, which was like the go-to joke for our little group.  Anyway, when I started digging into this sticker collecting thing CHiPs was one of the first things I looked for and was both happy and sad to find out that this card set existed.  On the one hand it was an awesome set with tons of stickers, but on the other it had an asking price of about $50, which in my book is like $45 too much.  I placed it on my “To Acquire” list (along with the Dungeons and Dragons Lazer Blazers and the 1980 set of Topps Monsticker puffy stickers which is my all time holy grail item) and waited for a reasonably priced set to pop up on eBay.  It did and here we are, basking in the light of Erik Estrada in horseback and Larry Wilcox’s million-dollar smile. 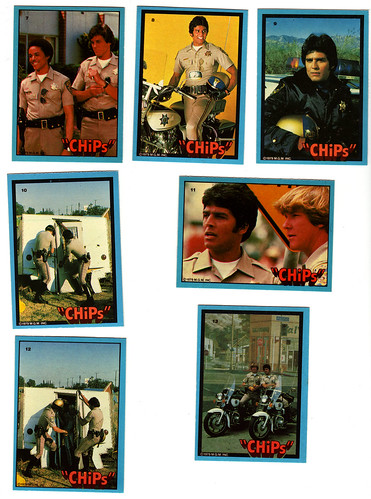 There are 66 sticker cards in this set, 60 with scenes from the show and 6 badge and portrait stickers.  This is the first set of Donruss sticker cards I’ve run into for the 80s, though I think they also did a series of Dukes of Hazzard sticker cards and I’m sure there were plenty of sticker subsets in their more normal baseball card sets.  Though most of these cards are dedicated to a million similar portraits of Ponch and Jon there are a few with the secondary show characters, like card #7 above.  There are also a bunch of “lazy” scenes which almost come off as creative like the 2 sticker action scene of our fearless duo prying open a what looks like a camper door.  Riveting stuff… 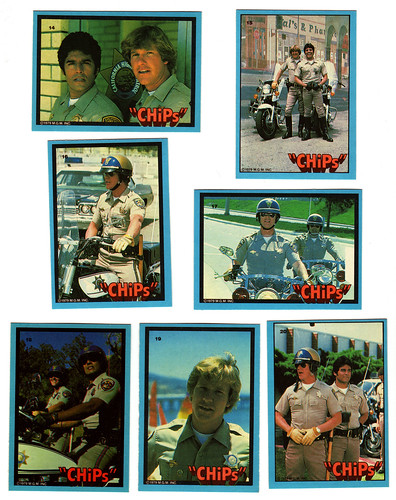 There are a couple of nice shots of Jon above and his penchant for “blonde” nightsticks and gloves.  I always though that was weird, but I guess it’s one of those tricks production designers can pull so that the audience can tell the two apart in scenes when they’re driving with their helmets on.  I’m sure I cared to know who was riding left and who was on the right, I mean I’m sure the plots depended on such details. 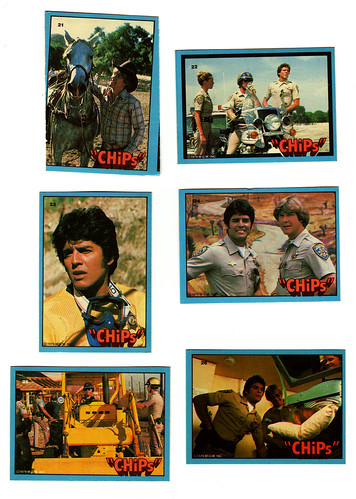 You know, Ponch isn’t the only Chipie who enjoys a little bit of horseback riding in his off time.  I’m glad they have fun hobbies that get them out of the house as opposed to my inane commentary on these stickers, which is a pretty weird hobby.  I wonder how hard it would be to write Peel Here entries while riding on horseback so that I could bring all this crap full circle.  I bet there were a lot of girls in the 80s that gave a little bit more than a passing thought to sticker collecting while on horseback (or pegasusback) while having tea parties with penguins and watching their teddy bears roller skate.  What would that scratch and sniff smell like I wonder… 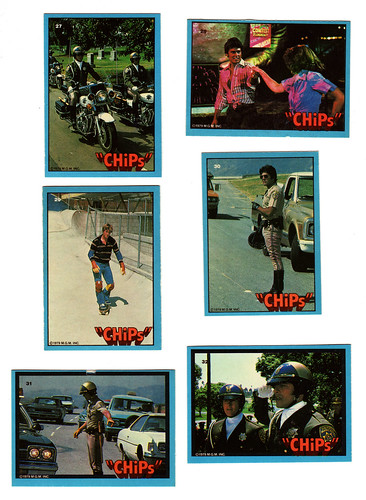 Now these are some better stickers (it was getting kind of repetitive there.)  There’s Jon skateboarding and Ponch doing some lovely disco dancing.  I can’t wait to get this DVD set to start re-watching all these episodes.  I wonder what funeral they’re attending? Seems like a bleak sort of scene to pick for a sticker, let alone two stickers. 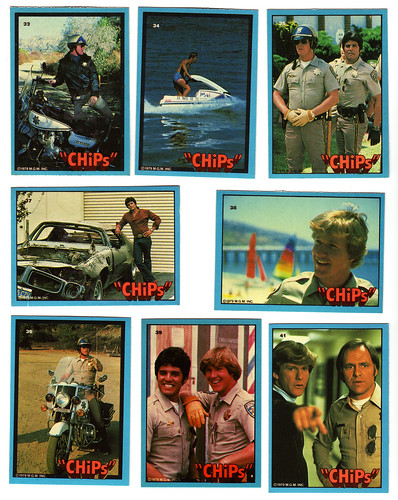 Jon sure is doing a lot of pointing in this set. We also get to see some more extracurricular hobbies here in the jet skiing and fixing up trashed cars stickers. 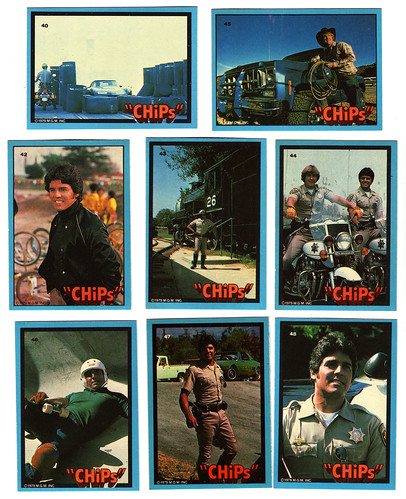 So who was the genius that chose the shot for sticker #40?  Hmmm, long shot of one of the actor’s backs with barrels and a car, now that’s an interesting sticker.  It’s about as good as Ponch standing sternly by a train.  You’d think that there were better scenes to choose from, but maybe after I start watching the show again I’ll realize that they stood around and sternly look at stuff for the majority of the show.  At least we get another skateboarding sticker here, a pratfall at that. 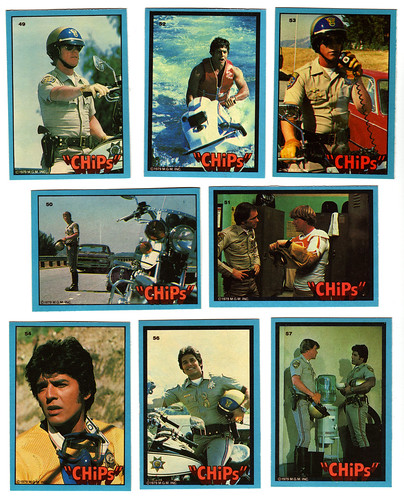 I think my favorite sticker in this set is Ponch and Jon by the water cooler.  That has to be the most “set up” of shots ever, I mean who actually stands around the water cooler and raps about work or gossip? 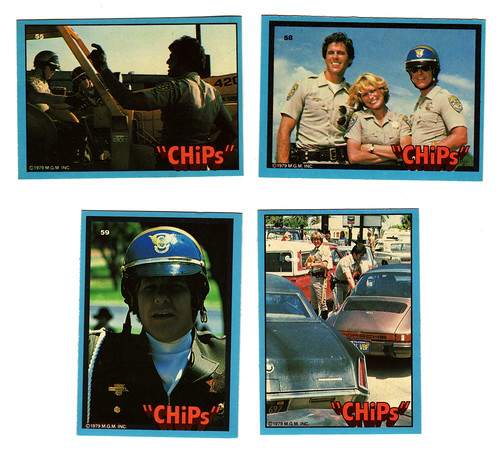 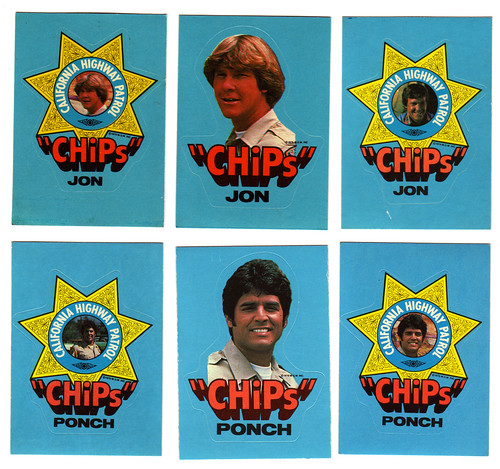 I really dig these last six die-cut stickers because they feel the most like real “stickers” as opposed to cards that moonlight as stickers.  I think this is definitely something that Topps has perfected and I can see where Donruss just doesn’t have a good idea of what (design-wise) makes a good sticker.  I do like that the who set of cards are also stickers though, and eventually Topps would switch over to this in their later 80s fare (very well in the Garbage Pail Kids series’, though I realize that the precedent for that goes back to the Topps Monster Initials, Ugly Stickers, and Wacky Packs, but they also did some ugly sets like the Supergirl sticker cards, and another set which I will get to eventually.)

Donruss was also not so “on the ball” as there are a couple examples of errors with this series of cards.  First off, there is a repeated set of cards, Ponch with the motorbike mask around his neck, which are in the set as both stickers 23 and 54.  There are also a bunch of twin cards that are actually minutely different, like stickers 20 and 35 below illustrates.  This is just plain lazy and shows that there was a ton of care that went into this set.  I think this is where Topps excels and is probably why they were on top as far as popularity and merchandizing gigs go.  Like I said the only two Donruss branded sticker sets that I know of in the 80s are the Dukes of Hazzard and this CHiPs set, though there were also Knight Rider and Magnum P.I. cards.  Fleer wasn’t far behind Donruss with only Dune, V, and Bo Derek cards.  I’m sure there are some sets I’ve missed but I know that Topps had way more, and much better quality. 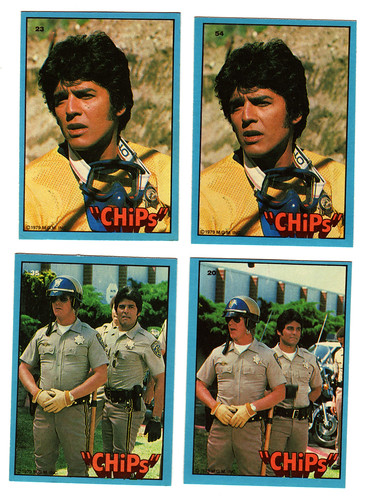 The other weird signature of a Donruss sticker card set is it’s card back puzzle, which is actually a feature in many sticker card sets, but what sets Donruss apart is the size of their puzzle.  As we’ve seen in most of the Topps sets I’ve shared, the puzzles were typically made up of 10 card backs.  Donruss, apparently said screw that and decided to make their puzzle a true poster consisting of all 66 card backs, a gigantomungus and even somewhat complicated puzzle that is one hell of a bitch to scan. 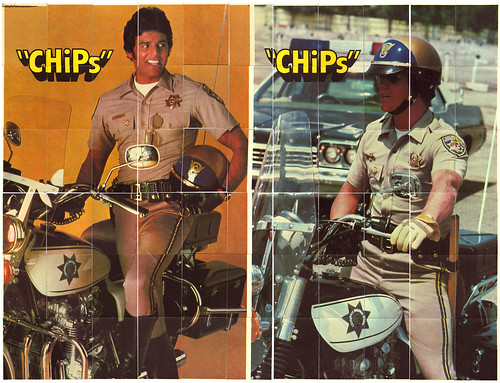 The puzzle is actually two separate posters, one of Ponch and one of Jon that are joined in the middle by card backs that overlap the two pictures.  Even though the cards don’t match perfectly, it would have been pretty cool to get this, essentially free, with the set of cards.  It’s something that you could actually put on the wall and call a poster.  Though I’m tempted to do just that, I can’t justify the money spent, so no falling asleep to Erik Estrada unless I find a cheper poster of him.

Next week on Peel Here, the freaking Silverhawks.

Make Like a Tree All Ages roundtable discussion podcast…