Today was a very strange day. It started with my (now) wife and I trying our damnedest to get married while battling the crazy squid-like bureaucracy of Georgia and its many twisted tentacles of changing rules and absent judges. We had our research on the whole getting married thing done months ago as we’re both anal and hate running into problems, and for once being prepared worked against us. The rules for what you’d need to get a marriage license changed exactly a month ago and there was no grace period. We needed two forms of IDs now instead of the one we were told we’d need, and the second forms were things we didn’t have access to (passports or birth certificates) and today was the freaking day. We had it planned, it’s our 7 year anniversary of being together (I’m slightly obsessed with 7 incase the image above wasn’t enough of a hint) and it was the perfect day. Supposedly. Long story short, what should have taken us 30 minutes turned into a four hour marathon of driving from county to county acquiring a license, finding a judge, and getting everything together. We did it finally and we are now in blissful marriage mode.

Well being the dork that I am and knowing that some toys I’ve been craving for years (well officially for months, but before that these were my dream toys) were about to hit store shelves, we made a quick post wedding run to Wal-Mart to see if the new adorable Transformers Robot Heroes chibi figures were in. Oh they were in… 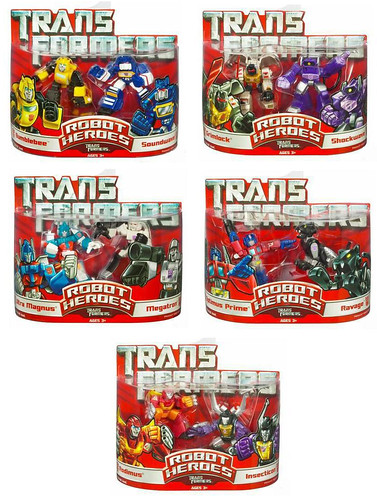 There were six sets on the pegs, the five above and a Mirage/Starscream pack, and I bundled them all up in my arms very lovingly as we made our way to the check out counter. I was so happy until Carrie scanned the first one at the self-serve check out lane and an error message came up on the screen. "Item restricted for purchase." What the blue blazers fuck does that mean? I was thinking that since they were so new that maybe they hadn’t been entered into the system. We called the cashier over and she tried it and then took them all from us with no explanation. WTF?!? I followed her after a second and asked what was up and she just said these are restricted. I asked to see a manager and she led us over to a customer service guy who look frazzled and overworked and who didn’t appear to give two licks off a rats ass what our problem was. She kept repeating restricted and he just said that it was probably a recall and that he was sorry but he couldn’t sell them to us.

I started to form an argument about how I’m an adult and that there is no reason why I shouldn’t be able to buy them when I just gave up because at the end of the day he works at Wal-Mart and he honestly doesn’t care if I live or die or pitch a fit because I can’t have my stupid little plastic toys. I don’t think I’ve ever had something like this happen to me, I mean it’s pretty stupid and I know that eventually I’ll be able to buy these dumb toys until my bank account is completely depleted, but it still irked the living hell out of me. Apparently either Mr. Hasbro or Mr. Sam Wal-Mart doesn’t want me to own these yet.

As a stupid P.S. to this I looked up Hasbro recalls online and there are none listed for these toys.