Though I believe that the idea of using cartoons as 25-minute food and toy ads began in the 60s and 70s, the practice was perfected in the 80s. As a perfect example of this I present this 15-page preview of the M.A.S.K. comic book, which was added to a bunch of regular DC Comics titles as an insert, stapled into the middle of the book, in September of 1985. DC had the license on a few cartoon/toy lines in the 80s that they did similar inserts with comics including He-Man and one of the weirder 80s Matchbox car lines. This preview, I believe, is the first half of the first issue of a four part mini series that was testing the waters on the regular series that would appear the next year (and which was subsequently canceled after the 9th issue.) I think DC was trying to repeat the success of Marvel, which had many long running comics that were spun-off of cartoons and toy lines including the Transformers, G.I. Joe, and ALF, not to mention a ton of other series that weren’t as successful like Count Duckula, the Ewoks, and the Thundercats. 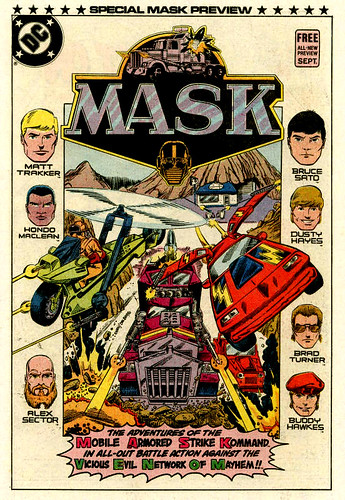 It’s funny, even though I watched the cartoon religiously as a kid and collected the toys, and even though somewhere deep down I realized that M.A.S.K. was an acronym for some longer name, I never knew what it stood for, or that the villain’s code name (V.E.N.O.M.) was an acronym at all. I also think it’s funny, now that I’m on the subject, that I never realized just how much of a rip-off this toy line was. I mean, Venom? Might as well call it Cobra. The Alt modes of all the vehicles are just a derivative of the Transformers. I will say that the size of the figures and the whole helmet gimmick was outstanding though. 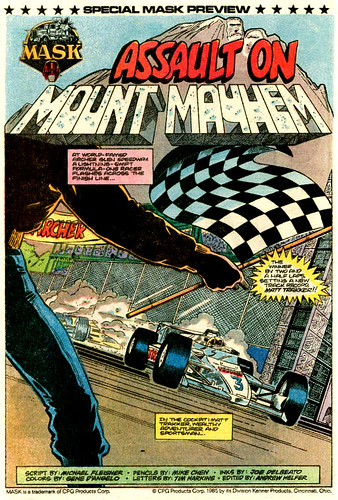 Man, Matt Trakker was a wealthy adventurer and sportsman, go figure. Isn’t that the mold for like all DC comics heroes? 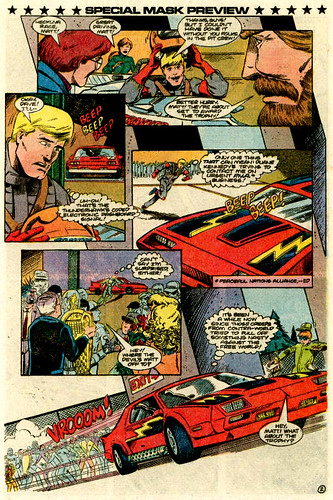 Another thing I love about cartoons as toy ads (and in extension comics like this that are just there to hit the market that doesn’t watch the show or to reinforce the market that already does) is that everything that is purchaseable gets a name. No, it’s not enough to sell Matt Trakker in a box with his vehicle; it has to be Matt Trakker, with his car Thunderhawk, and his mask Spectrum. It’s both deceptive and brilliant at the same time.

As far as the plotting of the comic goes, I love how in two short pages the writer has made Matt out to be the penultimate leader. He’s wealthy, an adventurer, a sportsman, the fastest man in a racecar, he works with the secret Peaceful Nations Alliance, and is so humble as give all the credit on his racing win to the pit crew while speeding off without accepting the trophy for his win. And damn those evil creeps from Contra World ruining his moment in the sun, I tell you what. 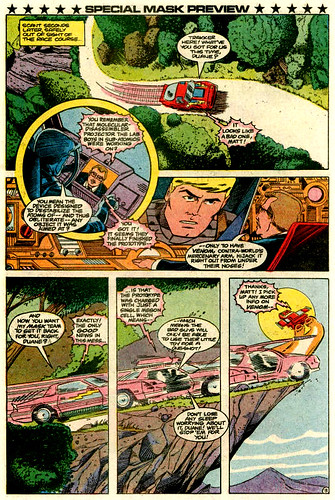 I love all of the techno babble explanation in this comic, not to mention all the secrets, secret headquarters, secret frequencies, etc. Very melodramatic. 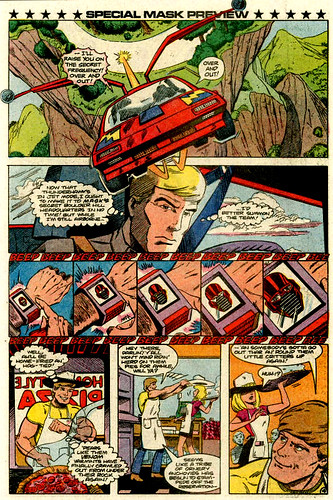 The one thing I want to know is why Dusty Hayes chose to work in a pizza joint instead of a BBQ shack? 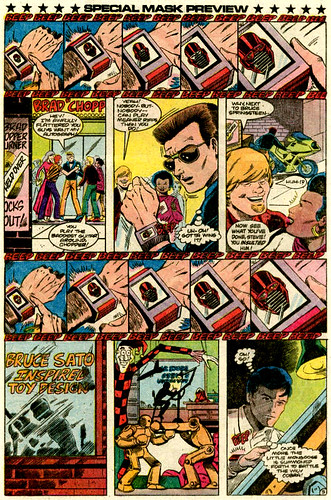 Man, every guy in the M.A.S.K. crew has the same hairy arm, and they’re all holding something in their hands as they get the call. I’m all for repeating panels gimmick, but only when it’s effect is to the betterment of the story, not out of laziness. BTW, Sato’s line there at the end is probably one of the worst pre-battle bits of monologue ever. I will say that I’m a big Brad Turner fan. Condor is my favorite vehicle in the M.A.S.K. line-up as toy motorcycles and helicopters we my favorites as a kid. 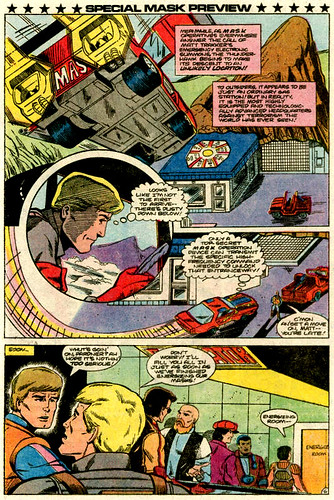 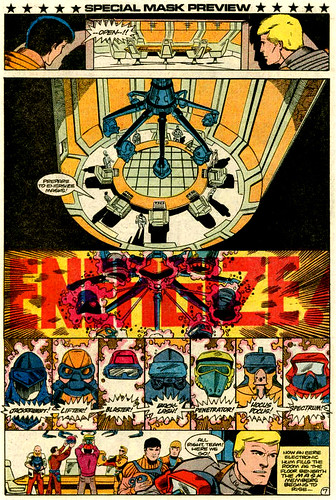 I will say that for all the hokey dialogue and exposition, that is one heck of an "energizing the masks" panel. That’s the best use of sound effect/exposition text ever. ENERGIZE! 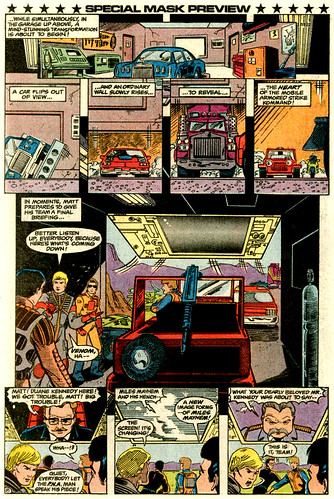 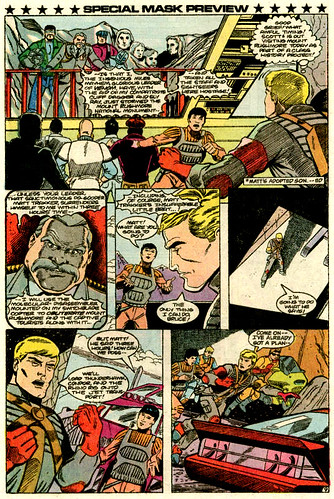 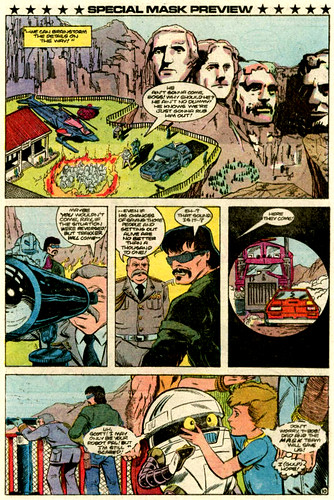 Can a robot whisper? Oh wait, I guess Princess Leia got 3-PO to whisper in Empire. Either way, there’s another weird 80s stereotype, scared robots. What gives with that? 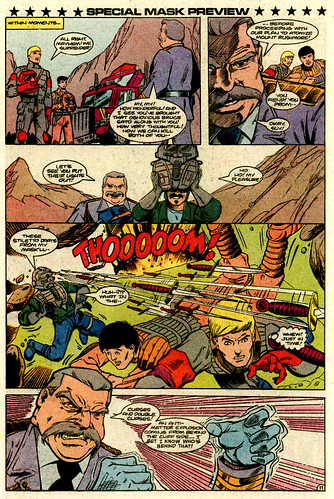 So like, I totally buy masks that give telekinetic powers, pyrokinetic or hydrokinetic powers, but who in the hell thought up a mask that creates daggers that fly out? I mean I’ve heard of staring daggers at some one, but in the words of Balki Bartokomus, "that’s ridicolos." 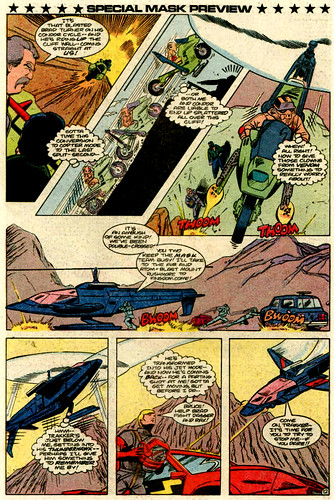 I always seem to concentrate on the negative with comics it seems. Oh well. Um, "…it’s an ambush of some sort…" What in the hell does that mean? Of course it’s an ambush, and there’s only one sort, and sort where someone ambushes you. Why are evil leaders always halfwits? Sometimes I wish there were more Dr. Claws and Mum-Ras out there and less Cobra Commanders. 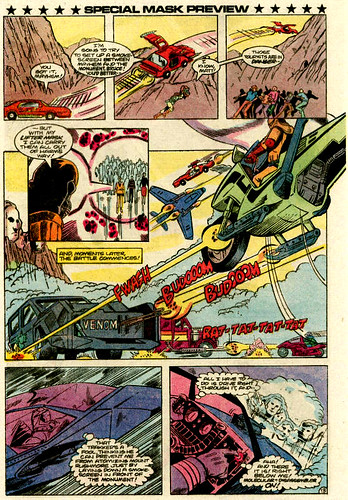 It’s also kind of funny that the artists chose to render the vehicles with the affiliation if it wasn’t obvious since there are no iconic symbols in the M.A.S.K. universe to help tell good and bad guys apart. 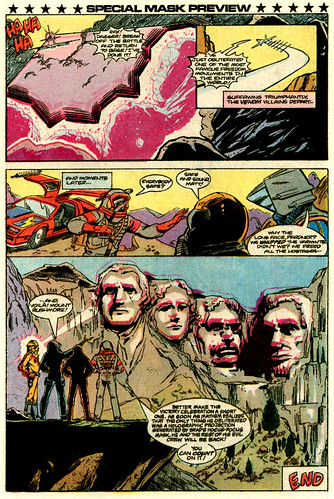 Last complaint, I swear. Um, how could Bruce tell Matt had a "long face" under the Spectrum mask? Seriously though, I think that the writers should have taken more of a chance with this preview and had it end in a cliffhanger, so if you wanted the rest of the story you’d have to buy the first issue of the comic. Maybe this wasn’t part of the 1st mini series issue after all.

Well, to end this little preview and to go right for the gusto, DC also included an ad for both the Toys and the TV show right at the end. I guess they were into being blatant about it. 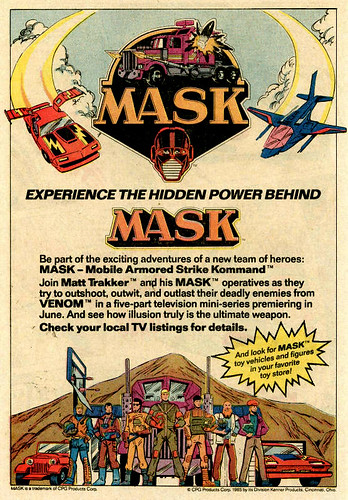 Man, I wish this show would get released on DVD. I know I whine about this all the time, but I’m sick of paying good money for bootlegs and I haven’t seen this show in almost 25 years. I can still sing the theme song though…

Return of the 31 Days of Monsters, Day 30: Demon Ruler of Toyland!