So here we are in the last week of May, and the last chunk of 80s Super Hero stickers that I have in my collection. It’s going to be a short week for me as I’m finally tying the knot with the wonderful woman that I’ve shared the last seven years with, and sort of reflected, this will be a short post.

This entry of Peel Here will effectively close out my collection of DC super hero related sticker schwag, by far not all there is out there, but all that I’ve managed to procure to this date. This first package of stickers actually brings back a lot of memories. In 1988, Gordy International, jumping on the huge Batman movie bandwagon, released this series of DC puffy stickers. In 1988 I became a comic collecting freak, and in particular I was all into Batman in any shape or form that I could find, and trust me it was everywhere; Batman cereal, toothbrushes, band-aids, candy, trading cards, toys, lunch boxes, shirts, bed sheets, nighttime lighting schemes on large buildings, you name it. Well, as I was obsessively buying up all the crap with a bat symbol on it I effectively made my last "stickers-for-collecting" purchase with the three different variations on these DC super hero puffy stickers. I no longer had photo albums to put stickers in, and in learning about proper collecting procedure, I left them all mint in package, at least until my Batman collecting bubble burst (and I ripped them out and stuck them on school folders.) 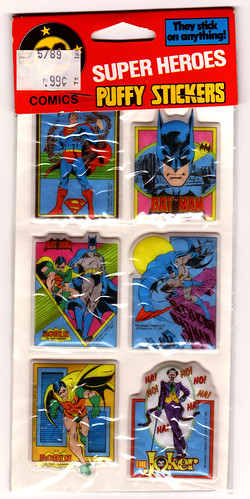 There are two other variations on these stickers, though the’’re both in a similar format, 1 Superman sticker, 2 Batman, 1 Batman & Robin, 1 Robin, and 1 Batman villain. I think the other villains are Penguin and the Riddler.

On the standard flat paper sticker front, there are these stickers produced by Hallmark in 1987. What I thought was cool about these was the addition of Captain Marvel (Shazam to some.) Typically you see Wonder Woman and every once in awhile the Flash, but Captain Marvel is pretty rare on merchandising, at least 80s merchandising. He was a little bigger in the 70s what with the live action show and all. 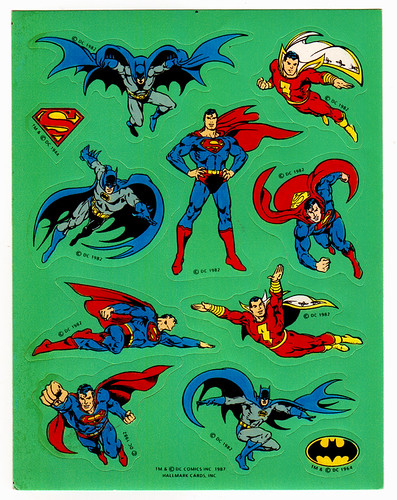 I thought I’d also drop a link here to an older Peel Here post with the Zero Heroes Sticker Card Set, which is timely for this month’s theme, something I wasn’t thinking about back when I started the column.  I really dig these parody cards, so enjoy.

Next week on Peel Here I’m going to share one of my favorite sets of sticker cards, one that was a holy grail item on my 80s sticker collection wish list, and one that I managed to find at a decent price after almost a year of searching. It’s going to coincide with an awesome DVD on TV release that I’ve also been waiting for, for a very long time. So strap on your black leather driving gloves (or tan if you prefer), and get ready to hit the road in 7 short days…