I’m back for week 28 of Peel Here, which also happens to be the 4th week of exploring my 80s Super Hero sticker collection, not to mention the DC Comics portion of the month long exploration. This isn’t the last week as there are practically 5 weeks in this May, so there will be one more to follow.

Now to dig deeper into the DC Comics branded stickers of the 80s I wanted to take a look at the 1984 Topps sticker card set for the cult flick Supergirl. Now I completely missed Supergirl in the theaters, but I saw it a million times on HBO and even though the film is sort of the weird bastard cousin of the Superman flicks, I remember having some fond memories. Hell, I even liked Superman III and IV as a kid, so that should illustrate my bad taste in films.

Supergirl was more or less the last attempt to revive the Superman franchise after Superman III was a bomb at the box office. The producers of the series, Alexander and Ilya Salkind, had purchased the rights to make Supergirl at the same time they bought the rights to Superman. The Salkinds (along with Richard Donner) were pioneers in the area of movie franchises, as they not only had a hand in the filming of Superman and Superman II back to back, but also were, from the get go, thinking of spin-offs and future sequels. With Supergirl the Salkinds hoped to continue on with franchise while giving Reeves and that story line a rest for a while, hoping that some new blood in the series would reinvigorate the series. They took a very similar approach to the film as they did to the first Superman by casting an unknown in the lead role (Helen Slater) as well as packing the rest of the cast with big names like Mia Farrow, Peter O’Toole, and Faye Dunaway.

Though the film fared poorly in theaters, it was popular enough to be merchandised a little, most notably with a poster magazine and a couple series of stickers. There were some puffy stickers, but the really nice set of stickers came from Topps. Typically Topps would license the rights to produce trading card sets off of films and TV shows, and then a lot of times they would produce a chase sticker card sub-set, but for the Supergirl film they changed their format a little to combine both the trading and the sticker cards. Basically they quadrupled their normal sticker count, from 11 to 44, and mixed the sticker card backs between puzzle pieces and movie story scenes (there were 10 puzzle backs and 33 story backs.) The story backs were similar to their basic card sets in that the contained images from the film, but instead of having a synopsis (like on the reverse of a basic trading card) they inserted stage directions and speech bubbles to relate the story. This isn’t new, Topps also did similar things with other cards sets, namely Mork and Mindy and Three’s Company, but I believe it was the first time they did this with sticker card backs. 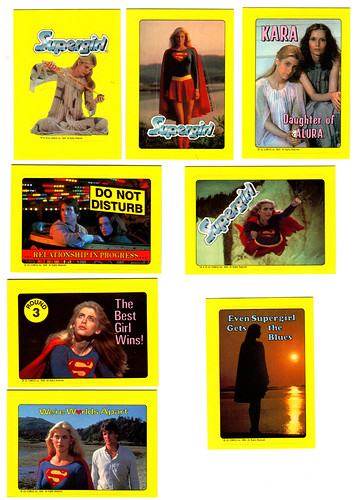 Though the property is basically unisex in its appeal, I believe these stickers were designed more for girls than boys as you can see in some of the above captions. The even Supergirl gets the blues card in particular is pretty much standard 80s girl fare (right up there with cute animals doing ballet or gymnastics, unicorns, flying piano keyboards, and pictures of roller skates.) The images on the stickers were in a loose chronological order and were numbered via the story card backs. Actually, in essence the stickers acted like the card back, but since that’s weird, I decided to present them in the reverse.) 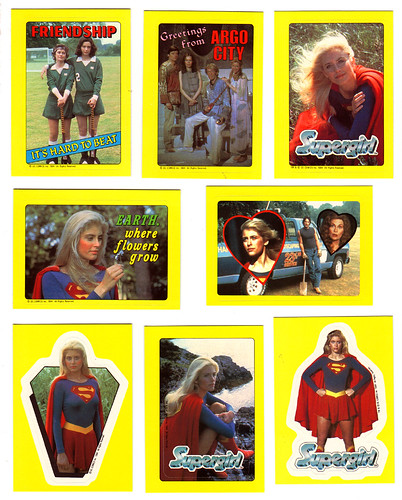 Also, since there were around 22 additional stickers to have images for (since Topps usually dealt in 11 or 22 sticker card sets) a lot of these stickers are sort of hokey with mind numbing captions like the above Friendship is hard to beat. These are rounded out by a number of iconic Supergirl stickers (either in flight or in battle ready poses), so it sort of balances out. Above we also get a look at another tie-in character to the regular Superman universe in the form of Lucy Lane (who has some tie to Lois, probably a cousin, as Supergirl is Superman’s cousin.) 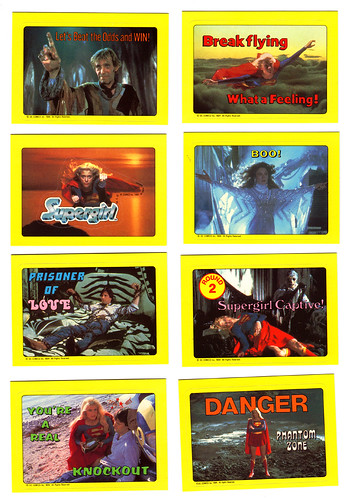 Actually, some of these stickers might as well double as Valentine’s they’re so inane. Like I said, definitely marketed towards girls here. Another weird plot device in this movie is the exchange of Kryptonite for sorcery as a weakness for super powered beings. The story involves Supergirl chasing a mystical object, an Omegahedron (which has the power to create when used properly), to Earth where she realizes that she has special powers thanks to Earth’s yellow sun. The Omegahedron falls into the hands of Faye Dunaway who fancies herself a witch, and with the object actually gains sorcery powers. She uses these to banish Supergirl to the Phantom Zone, the place of punishment introduced in the first Superman movie (it’s where General Zod and his cronies were banished, you know, that clear pane of glass floating in space that looks like a bad album cover.) 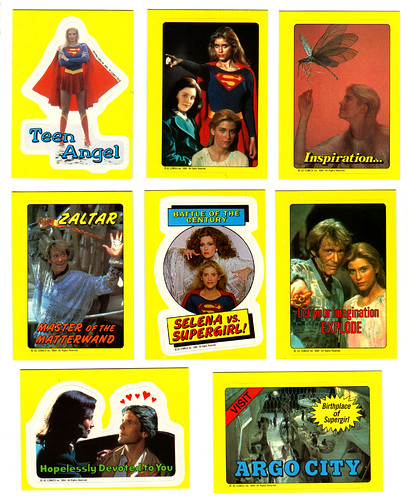 Supergirl ends up powerless in the Phantom Zone, but is saved by her mentor (Peter O’Toole) who sacrifices himself to free her so that she can go back to earth and save the world from a mystical Faye Dunaway. There’s also a bo-hunky stud somewhere in the mix, as well as bumbling evil sidekicks, and an appearance from Marc McClure, reprising his role of Jimmy Olsen from the other Superman movies. 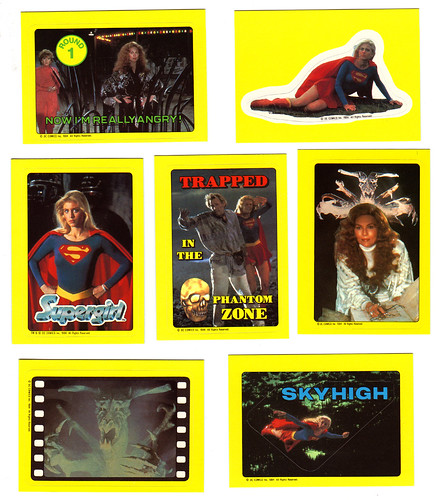 Christopher Reeve was supposed to make a cameo appearance, but bowed out due to script changes and possible disagreements with the creative team. I believe the original script called for Supergirl to save a defeated Superman from the Faye Dunaway character, but that was changed as production ramped up. 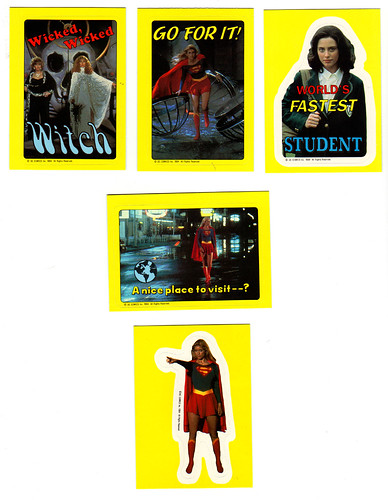 Like I said earlier, this set consisted of one 10 card puzzle as well as 33 (32 if you don’t count the above title card) story cards. 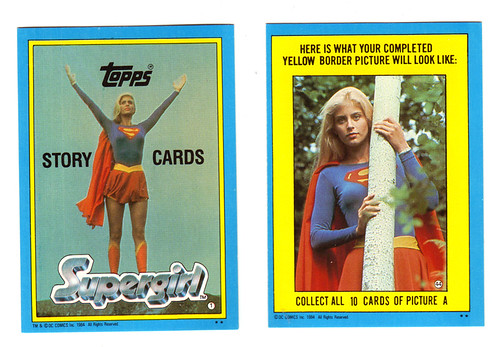 Here’s what the completed puzzle looks like. It’s a pretty cool image, though not necessarily what one might want out of a Supergirl poster. 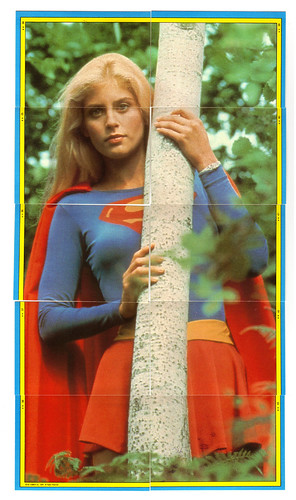 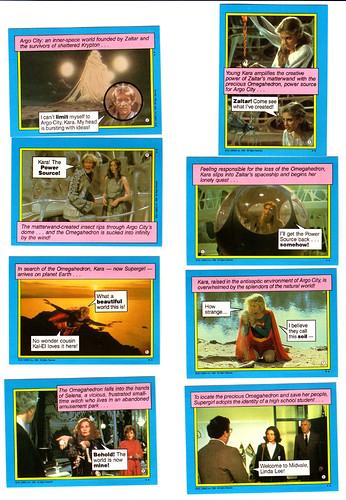 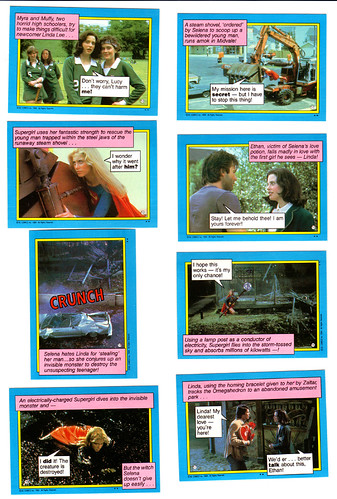 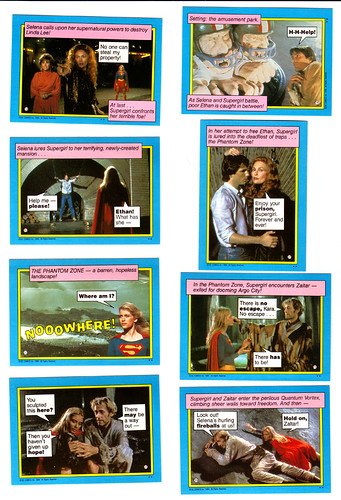 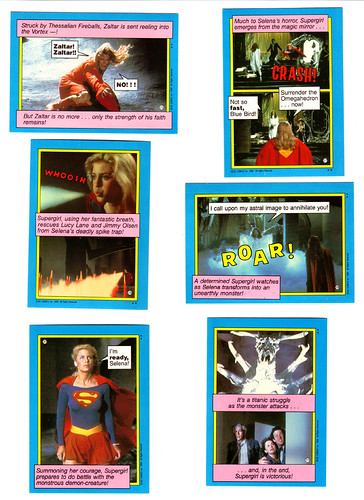 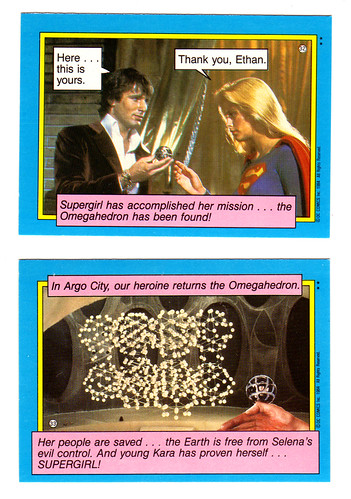 For anyone interested, the film was released twice on DVD. Once by Anchor Bay in a nice 2-Disc special edition (that unfortunately now out of print) which featured both the extended international edition of the film as well as a longer original cut, commentary, and a making of featurette, and then is was recently re-released by Warner Brothers as part of their marketing ramp-up for the Superman Returns flick (though not in the huge deluxe Superman box set) and though it’s only the 125 minute cut of the film, it retained the commentary track. Also, as I learned recently, Helen Slater is in fact not related to Christian Slater, a rumor that began after the two starred together (as brother and sister) in the very underrated Legend of Billie Jean.

Come on back next week as we finish off our look at 80s super hero stickers with some more DC sticker swag.

The Writing Squad, taking a look at the Script for The Monster Squad