Peel Here #27, I wonder what batman would look like in green…?

Well, it’s week three in our month long look at super hero themed stickers from the 80s, and with this week we make the switch from Marvel to DC’s stable of characters. I sort of kicked off this month because of the release of Spiderman 3 in theaters, but was quickly bummed out after I caught it opening weekend with my fiancée, so I’m sort of happy to past pictures of Spiderman for a bit. Man, what the heck was Raimi thinking with this last flick? It was all over the place and story-wise it ranked down there with the Daredevil and Ghost Rider flicks. Dance numbers and emo-Pete aside, there was just some really rank storytelling. I mean, c’mon, how the hell does it seem like a good idea to have Harry’s butler (a character we have yet to see in the films to this point) schooling him on the blow by blow of the death of his father and the innocence of Spiderman? Worst Deux Ex Machina I’ve seen in awhile. The film was riddled with moments like that, on top of having almost no time to develop any of the five story lines it was trying to juggle, which in the end just gave me a headache more than anything. The film was pretty, and it has some of the most convincing web-slinging we’ve seen to date, but that’s not saying much for this film. I think word of mouth got out as it went from being the most successful movie in history to dropping 60% this past weekend. Granted, it’s still raking in the dough, but at a drastically lower level with no new competition to blame.

What am I spouting silly box office numbers and ragging on Spiderman for when I have new stickers to share? So lets get back on track and take a look at some of the weirdest 80s stickers I’ve run across yet, the 1984 DC Super Powers Stain*A*Sticker set from Craft Master (a division of Fundimensions, which is in turn a division of CPG Products Group, whew.) 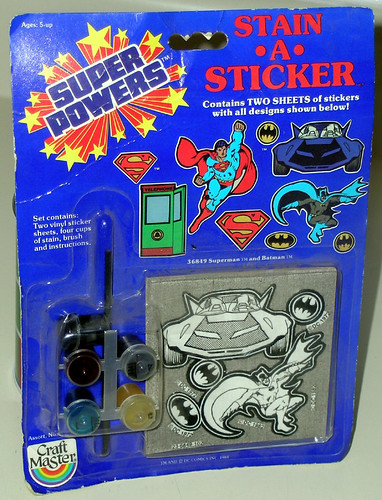 This was a very difficult purchase to make when I was looking for stuff to share on the blog. On the one hand these are pretty darn wacky and I’d never seen anything like them outside of slightly similar products like Shrinky Dinks or those Makit Bakit homemade sun catcher sets (which are actually still around.) On the other this set wasn’t cheap and I knew I’d have to rip it open in order to be able to share decent pictures of the set. Well, I said screw it and here it is in all of it’s crafty glory. 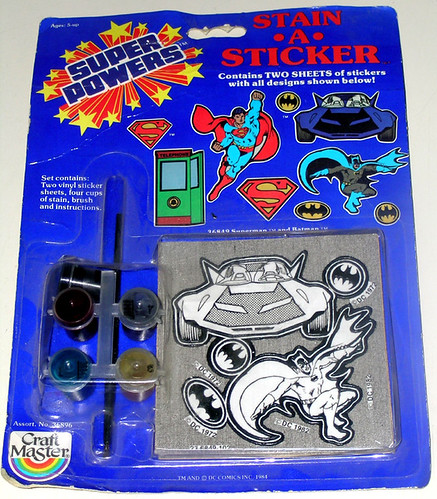 Basically this set comes with two pages of black and white vinyl stickers whose picture outlines are raised slightly so that you can paint in the white gaps to make your own colorful stickers. The set comes with 4 stain cups (red, yellow, blue, and black, actually I had two blacks in mine; you mix them to get orange, green, and purple if desired), a brush and the two sheets of stickers.

There is one sheet dedicated to Superman and one to Batman, with Batman coming off much better in the process. What kid is going to get a kick out of a phone-booth sticker, I mean seriously? At least with Batman you get the Bat-mobile and 3 bat-logo stickers. 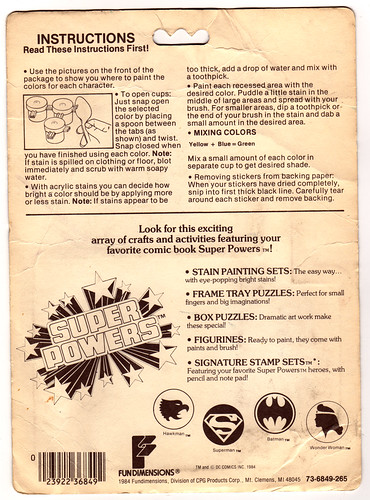 At the end of the day I think it’s kind of weird to have a do-it-yourself set of stickers like this. I mean you know these has to cost three or four times the price of normal stickers, not to mention the fact that some kids would either be too lazy to stain them, while others ended up using the stain on stuff like carpeting and junk. Don’t get me wrong, I am all for encouraging kids to be creative and artistic, etc. I’m just not sure this is the best course to take in making an innovative sticker set. I guess I’d have to give the company props for trying to do something different, it just seemed like a doomed product to me. To be honest, I haven’t seen any other variations on this set from this comapny, though I’d have to believe they’re out there. I have seen a set of black and white A-Team stickers that came with some scented crayons to color them with. In fact the crayons were chocolate scented, which I think is maybe borderline racist considering coloring Mr. T and all. It just seems in bad taste.

It’s interesting to see the rest of the product line that Craft Master was producing in 1984. In addition to these sticker sets, there were also Paint*A*Figurine sets, Stain*A*Painting sets, as well as a couple varieties of puzzles (which "dramatic" artwork seems to make special), and a set of stamps with DC character logos. Since when is the Wonder Woman logo a silhouette of her head and not two winged Ws? Did this change in the 80s or where they just being creative with these stamps? 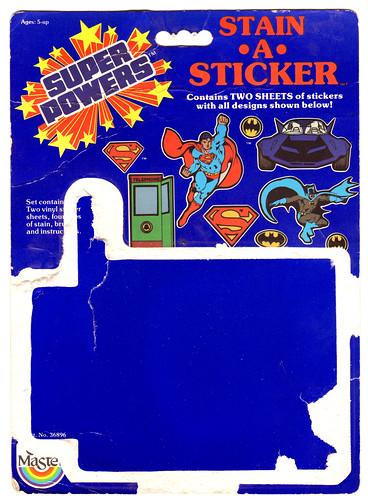 Anyway, I guess these get brownie points for being some of the oddest in my collection, but those don’t add up to much and you can’t buy anything with them anyway.