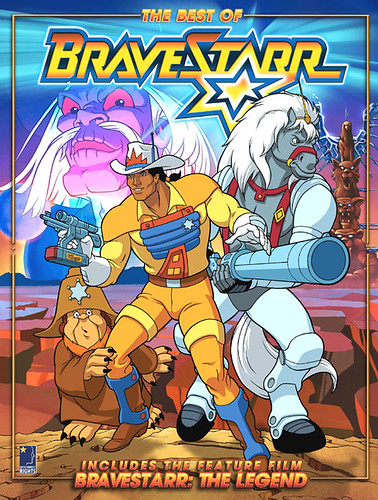 Of the ton of BCI Eclipse DVD release news coming out of TVshowsonDVD.com recently, the one I’m the most excited about is the 1st release in a series sets for the Bravestarr cartoon! Bravestarr, along with Silverhawks and the Spiral Zone were like my junior favorite cartoons (after G.I. Joe, Transformers, and M.A.S.K.) I’m so excited to see it’s finally getting the DVD treatment. This first set is going to be very similar to both the He-Man and She-Ra best of releases and will contain the feature length movie Bravestarr: The Legend, and five fan-chosen (I believe) episodes over two discs. It’ll be released on July 3rd.

I absolutely can’t wait to get my hands on these cartoons, as I haven’t seen them in about 20 years. Tex Hex was always right up there with Darth Vader as a villain for me for some reason. The set is up for pre-order on Amazon right now for $17, and it’ll retail for around $25. Once again, Andy Mangels will be helming the production duties on the special features, so I hope they’re as good as his work on the He-Man and She-Ra DVDs.

Eyes of the hawk, ears of the wolf, strength of the bear, and freaking speed of the puma people!

The Art of Coloring Books