So things are calming down a little bit here at the house of Branded. After last week’s car-keying event (actually there were two keying events) I’ve found out that it’s been happening where I work, which though it doesn’t ease the mind to know that someone hates me enough at work to do that, but it’s better than having it happen at home where I can’t help but park. At least at work Carrie can take the car and just drop me off. Either way, it’s looking like the Rabbit is going to be in the shop for a couple of weeks and the final estimate is looking like it’s going to be in the $5,000 range.

Well, I’m not really here to gripe about the stupidity of normal everyday life, I’m here to talk about the inane world of 80s stickers, and we’re right smack dab in the middle of a month long salute to super hero stickers on Peel Here, so lets get back to it. When I left off last week (with the Incredible Hulk TV series Topps sticker cards) I said that I’d share a bunch of Marvel stickers that I’ve managed to accumulate over the last year, which incidentally cover a nice spectrum of characters and styles. First up we have a complete sheet of the Hallmark distributed 1983 super hero stickers, a sheet that I had as a kid and coveted mightily. 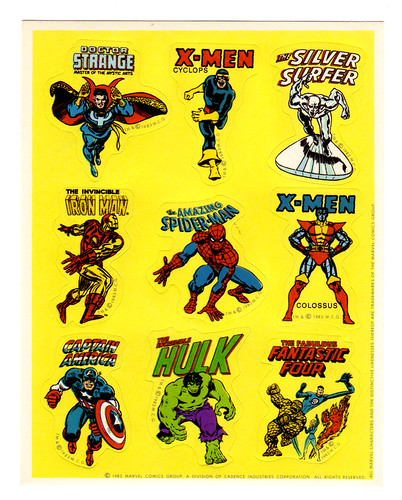 I was six when my mom picked up a pack of these stickers for me, and I was also right in the middle of my sticker-collecting phase. I think this was the first pack of Hallmark stickers that my mom picked up for me and I was excited if only because there were four sheets of these stickers in the package and after I placed a sheets worth of stickers in my photo album/sticker album I wasn’t sure how to divvy up the rest of the extra stickers. I’m almost positive that a sheet was brought to school and ended up underneath the flip top desk that I had in first grade, as I seem to remember getting a talking to about it. I think a few more ended up on the side of my chest of drawers, but where the rest ended up is a mystery to me. I’m a pretty big pack rat when it comes to paper items, but I don’t have much of anything from this time, so maybe my mom was into culling my stacks of junk.

One of the things that I remember absolutely loving about these stickers was that they opened up a new world for me in terms of super hero characters. I was pretty familiar with the bottom row, The Hulk, The Fantastic Four, Captain America and of course Spiderman, because of the comic books I’d check out of the school library and the various TV shows and stuff, but characters like Dr. Strange, the Silver Surfer, Cyclops, Colossus and Iron Man were completely foreign to me. Looking back on it now I’m kind of surprised that Colossus even ended up in this set as Wolverine was a much more popular character, but I’m even more surprised that the designers of this sheet went with two X-Men stickers instead of including a Spider Woman, Namor, or Thor sticker.

The next couple of sets have popped up in a couple forms during the 80s. These stickers from 1987 (though the stickers are labeled 1984) are branded simply as Marvel Comics Super Heroes Puffy Stickers, but as you’ll see in the ad following that the same stickers were previously branded a couple years earlier as Secret Wars puffy stickers.

I believe that there were at least three separate sets of these stickers which all were a variation of 2 Spiderman, 2 Captain America, 1 Doctor Doom, and 1 Doc. Ock stickers. These have some basic Spidey poses, a couple of hideous Doc. Ock stickers (one where he’s smoking which you’d never see today) and some very dynamic Doctor Doom and Cap poses (some of the latter taken from Jack Kirby art which is pretty cool.) 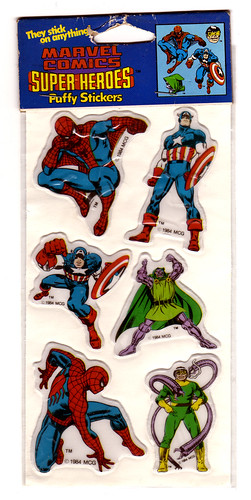 As you can see in this mail away Dorman’s American cheese premium ad a lot of these same stickers were available in 1985 as part of the big Marvel Comics crossover event, the Secret Wars. It even appears that they ditched a few of the characters, namely Iron Man, Wolverine and Magneto which I guess weren’t as popular in the later 80s, though that’s when I started getting into the X-Men. This mail away sticker and album set was also available in stores and is in the same style as other popular Gordy sets like the A-Team, not to mention other comic and TV show sticker merchandising. 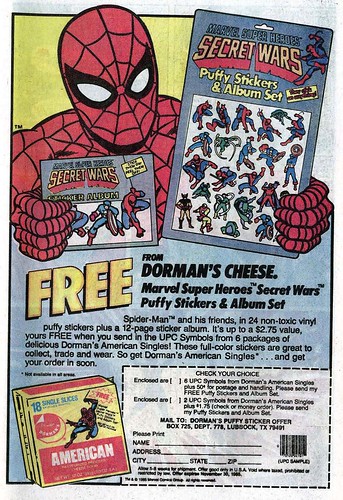 To round out the style of stickers in this edition of Peel Here, I present another example of what’s becoming my favorite set of stickers from the 80s, Colorforms’ Lazer Blazers. 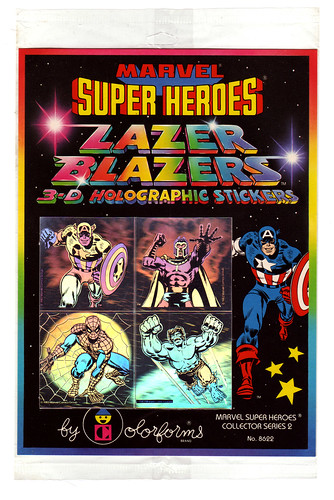 Of all the 80s stickers that I’ve managed to track down, Lazer Blazers are some of the most rare, and can fetch a pretty high price if you’re not picky and patient. This Marvel collection is actually the second set of hologram stickers produced, though I’ve yet to find any evidence of the first collection anywhere online. I have a theory that this packaging might be a misprint, as a lot of the more popular characters are featured here, and I can’t imagine who would have come before.

I also think it’s interesting that of all the villains that could possible have been included, Magneto was the first choice as he’s mainly an X-Men villain and at the time I think he was even starting to be considered a hero. Honestly, I’m really bummed that there wasn’t a Red Skull hologram included, because that would have been pretty damn cool. Either way there is something undeniably cool about the packaging and design of the Lazer Blazer brand and these Marvel stickers are a great example for these early hologram stickers. Super Heroes are built to be exciting and dynamic which the hologram technology very easily brings to life, unlike say a close up of Hannibal Smith from the A-Team.

Next week on Peel Here, I’m going to make the jump to DC Comics with some of the weirdest stickers I’ve managed to find yet.

Getting Slimed by the Oral History of Nickelodeon…