At long last, and with a sigh of relief from yours truly, there is finally some concrete information on the upcoming release of The Monster Squad on DVD. Lionsgate will release the DVD on July 24, 2007. Here’s a look at the cover art… 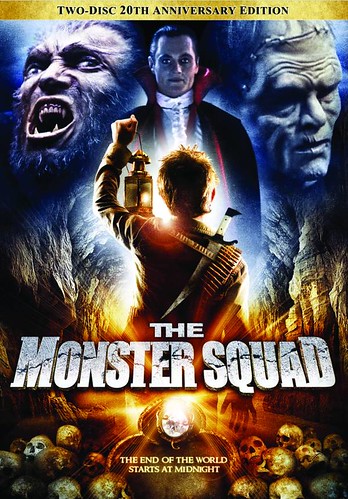 Now I’m not a big fan of this cover. It exemplifies everything that is wrong with most DVD cover artwork. Not only is it NOT based on any of the original poster or home video release artwork, but it’s a terrible mock-up of new and old images that makes it look like it’s trying to cash in on a bunch of unrelated films, not to mention that it misses the point of the film by about three inches. First off, it looks like an amalgamation of the Pan’s Labyrinth posters, the Bridge to Terabithia poster, and hell, it even invokes the Team America poster as well, which is kind of silly. 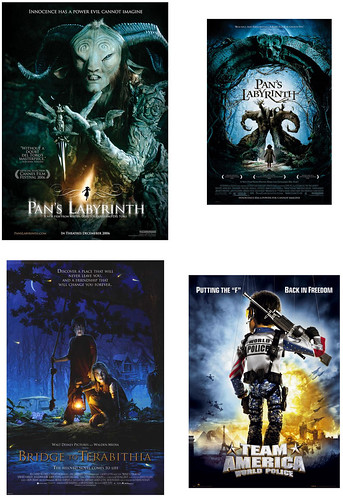 Why exactly does the kid have a rifle ammo belt on? Or a short sword for that matter? Not that I’m trying to be super nerdy picky or anything but the main weapons used in the movie were a complex bow, a shotgun, a pistol, a few stakes, and a slice of freakin’ pizza (with loads of garlic.) Now other than Photoshopping in a trio of the monsters at the top of the artwork, it’s basically lacks the feel of the movie.  I hate that they ditched any artwork of the original actors and just went with a new kid that sort of looks like an Andre Gower clone.  Here’s the original poster in all it’s hand-painted 80’s glory… 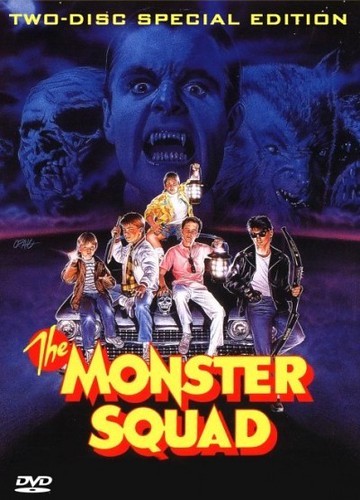 At the end of the day, I don’t really care. I’m just happy this movie is finally getting the release it deserves. Hell, I would have been happy with a bare bones single disk at this point. If the cover art really bugs you, then I suggest you send Andre Gower an e-mail as he states on his site so that he can forward them on to the appropriate people. Speaking of which, Mr. Gower (who played Sean in the Monster Squad) has a pretty cool site with some MS trivia, links and other fun odds and ends.

For me, this is the culmination of 20 years worth of waiting for a nice copy of the flick that I can call my own. In fact, today is almost a year to the day when I forwarded the plea to get the Monster Squad on DVD. It was last year around this time when some of the Ain’t it Cool News people set up a reunion screening at the Alamo Drafthouse that would start the ball rolling on straightening out the mired rights issues and focus the interest in this film.

I saw it in the theater when I was 10 years old with a friend, Bryan Borsom, in 1987. We’d seen the trailers and I remember scanning the newspaper for our local theaters to see when it’d be playing in our area. I don’t know what it was about the trailer, but I was super jazzed to see this film. I think I was just at that perfect age, I was on the verge of leaving elementary and moving into middle school, so a huge part of me felt like that was the last summer where I could really feel like a kid. I was about to give up carrying a lunch box, I just got into skateboarding (with an older cooler middle school crowd), I was pretty much graduating from Bunnicula to Stephen King novels, and Metallica was the only band in the world for me.

One of the things that I remember most about that Saturday is that we (Bryan and me) had planned on seeing both the Monster Squad and the Garbage Pail Kids movie, but neither of us had enough money for both. So after we finished watching the Squad kick Dracula’s butt back into limbo we begged our way into a free screening of the GPK flick by telling the clerk at the customer service desk that our mothers weren’t going to be able to pick us up for three more hours. Man, I was a dork as a kid. In the end I’m glad my hard-earned allowance money went towards Monster Squad as it’s by far the better and more deserving flick. When Bryan and I were finally picked up, we spend the ride home arguing about what Sean yells to Horace when confronted by the wolfman. I kept saying it was "Kick him in the nards" while Bryan assured me it was "Kick him in the balls." Once again, time would answer the question as male 30-somethings everywhere will attest that kicking a monster in the NARDS is the best way to go.

I’m not sure if the letter writing campaign that director Fred Dekker suggested was the straw that broke the camel’s back, but I know I wrote my fare share. I intended to write like thirty separate letters, and I managed to do about half of that before I felt like I was writing to a brick wall. Then a few months ago the DVD release rumors began to gain steam. Granted, it was about the third or fourth time in as many years that internet rumors started circulating, but this was the first time when both the director and the actors started to chime in on the subject.

Today the whole thing really feels solid for the first time in ages as I read this post on Ain’t It Cool, and saw it mirrored around the net. The bad cover art being released is actually what makes it feel real to me. I know this sounds silly and all, I mean it’s just a silly kids movie from the 80’s, but somehow it feels like it’s my movie, and I’d be willing to bet that a lot of kids growing up at the time feel like this. For years I was the only person I knew who loved this movie to death, to the extent of buying an old rental copy from a store for the hefty price of $30 (at a time when the average new video was about $5.) None of my friends felt the way about MS that they felt about say the Goonies, or even Space Camp. So it’s always felt like my movie.

Looking back at all of the bootlegs I’ve purchased for this film, this set pretty much covers everything I had before (trailer, widescreen, poster and still gallery) with more than enough additional features. Though I’m not fond of cast commentaries, I’m really looking forward to the director/cinematographer commentary track as it seems like Dekker is genuinely into this flick. I hope it’s not all, "Hey, remember when we made this movie? Yeah, it was a blast." I also hope the making of documentary is a little more than a studio fluff piece, and seeing that the film is 20 years old this year I’d hope it would be new stuff and not an archival "making of". It’ll also be cool to hear Tom Noonan in the vintage interview. He’s a pretty interesting fellow whose performance in Manhunter is pretty imposing. He’s got a website up where it looks like he hosts workshops on acting, directing, and writing.

As far as why there might be as much interest in this film after all these years you don’t have to look much further than some of the creative talents behind the monster creation and writing. The legendary Stan Winston was given the task to create the re-vamped look of the classic Universal monsters, and he did so with an amazing gusto and a welcome realism. The film features one of the best Creature suits I’ve ever seen, not to mention one hell of an imposing werewolf, and a mummy that strikes a nice balance between Karloff and Jack Pierce’s version and the current CGI crap fests that were the Stephen Sommers films. As far as the writing goes, Shane Black (he of Lethal Weapon fame, not to mention starring in Predator) was involved on the project, though I’m not sure to what capacity.

As far as the kids that starred in the film, most are either still active in the entertainment industry or are on their way back in. As I mentioned before Andre Gower is still active and I believe has begun work on his putting together his own film festival. Ryan Lambert (who played the older punk Rudy in MS, not to mention starring in Kids Incorporated, a show whose theme song will etch itself into your brain if you aren’t careful) fronts a band called Elephone, and Ashley Bank (who played the young Phoebe the feeb) has grown up into a lovely woman who has worked in a more behind the scenes capacity. Sadly, Brent Chalem, who played Horace (and who exhibited the exact same fashion sense that I did, same T&C t-shirts, and surf shorts), died of pneumonia in 1997 at the age of 22 while he was attending law school. Robby Kiger, who played Patrick, pretty much fell of the map though, and in some of the recent interviews I’ve read with the other cast members no one seems to have kept in touch. Michael Faustino (who played the cute Eugene and who is the brother of David Faustino of Married with Children fame) has also sort of dropped off the map.

I also found Duncan Regehr’s art site a couple weeks ago, so if you were ever interested in what a once great Dracula actor does on the side of his acting gigs, take a gander. I also thought I should mention that Michael Sembello has a site up. Sembello recorded the awesome Monster Squad theme song "Rock Until You Drop", not to mention music for flicks such as Flashdance. He’s said for years that he’d eventually release a nice high quality MP3 of the MS song on his site, but has yet to do so. Carl Thibault, the man that was under all of the wolfman make-up (not to be confused with Jon Gries, the actor that played the human incarnation of the wolfman) has also struck out on his own creative endeavor recently with his first directorial feature film, the Garage.

What’s truly an awesome coincidence for me is that July 24th is just one week after my 30th birthday, so I’ll truly get the perfect geek present this year. Man, I can’t freakin’ wait to see this in nice quality DVD. In 2007 wolfman indeed has nards.

Is it worth revisiting 80s films on the big screen?

Octopus, or how the film Popeye taught me to fear and hate unconditionally…