I swear to Christmas, it’s been such a crappy week here in the house of Branded. I’ve been dealing with so many car related issues that I swear, I wish it would surprise me by turning out to be an Autobot, transforming in front of me, do a little dance, and then get the crap kicked out of it by a passing Decepticon jet. As a semi-related shout out to all of the potential car keying vandals out there, don’t do it. As angry as you may be, it’s such a pointless act. First off, unless you sign your name in scratch on the car, it’s anonymous, so your act will most likely not change anything that you’re pissed off about.  Second the amount of damage done, though it seems trivial, is quite fucking expensive, which in the long run is only going to hurt everyone, as insurance companies will most likely cover these claim costs by raising rates across the board. Did I mention it’s cowardly and freaking expensive (the estimate on my car is $4,000)? Anyway, enough negativity. On to the stickers!

So for the entire month of May, and in celebration of the new Spiderman flick about to hit theater screens, I figured it would be fun to explore a bunch of Marvel and DC super hero branded stickers. It just so happens that I have five columns worth of super hero stickers in my collection, so this should work out perfectly. So to kick things off I’m going to share a pretty cool set of Topps sticker cards for the awesome Incredible Hulk TV series.

As a kid growing up in the 80’s I spent a good chunk of time being inundated with plenty of super hero related programming and merchandising, and pound for pound, my favorite character had to be the Hulk. Even though I was amazed that "a man could fly" in the Superman movies, even though Adam West made me giggle in the re-runs of the campy Batman live action show, and even though I watched Spiderman and his Amazing Friends religiously, I always came back to the Bill Bixby/Lou Ferrigno live action series. One of my first plush toys was a stuffed Hulk doll that had Velcro on his hands so that he could grab and hold onto things. I also vaguely remember having one of those plastic Hulk halloween costumes, you know the kind, with the half mask and the vinyl pants suit. The Hulk was also the star of one of my favorite books that I checked out of the school library a million times (which I’ve mentioned before.)

There’s just something magical in the transformation of Bruce Banner (David if you only watched the show) into the muscle bound, green skinned Hulk. I think there’s something primordial in a young boy’s mind that can completely relate to this anger and frustration and it’s got to be one of the most basic and obvious of super hero archetypes. The series did an excellent job of bringing this character to life for me, even if (at age three) I didn’t understand everything that was happening in each episode. I know the series was pretty popular after it’s initial made for TV pilot movie hit the air in 1978. It lasted through 4 and a half seasons and a handful of additional made for TV movies that helped to launch my interest in comic collecting in the late 80s (spurred on by guest appearances of Thor and Daredevil in two of the MFTV movies.) 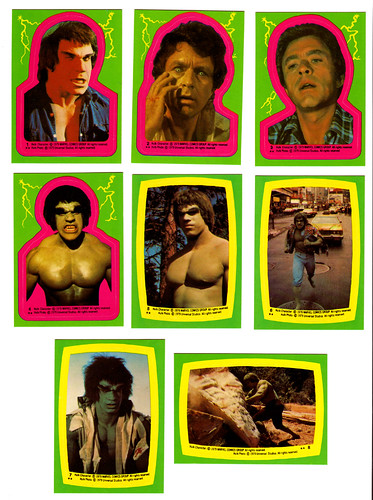 This Topps sticker card sub-set does a pretty good job of capturing both the feel of the show as well as providing a bunch of awesomely iconic Hulk stickers. There are 22 cards in the set, all of which have plain white backings. I’m not sure why there wasn’t a puzzle included since these stickers came out in 1979 and there was already a Topps Buck Rogers set that used the puzzle gimmick. This set does a pretty good job of focusing on the Lou Ferrigno incarnation of the Hulk, with half of the stickers set up as portraits (with that great thick bordered Topps die-cut) and the other half as scenes involving the Hulk running or pushing things (as he was apt to do most of the time.) In fact in this first scan we can see the Hulk both pushing a rock and running through New York City (you can also sort of make out the fact that Lou Ferrigno was wearing green hulk booties in the third card on the end in the second column, as he didn’t want to step on any needles, used condoms, or crack pipes as he ran through the 70’s era Times Square.) There’s also a nice shot of Bill Bixby with the initial "change" contacts in, one of the greatest TV money shots IMHO. 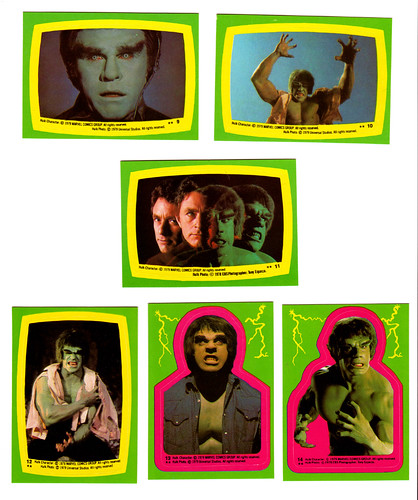 In this second scan of the set you can see where I swiped my Peel Here logo. This set, like the Buck Rogers, Indiana Jones and the Temple of Doom, and Mork and Mindy sets don’t yet feature the little "Peel Here" arrow, which I’ve felt was a very iconic part of the Topps stickers. I don’t think this was introduced until the mid 80’s, possibly with the release of the first Garbage Pail Kids series.

I really dig the production art used for card number 11, which shows Bill Bixby’s Banner fading into Ferrigno’s Hulk. That’s always been my favorite piece of the TV series art. On the bottom left sticker we can also see that in one of the post action scenes, some of the green paint was wiped off of Ferrigno’s hand. I read that he had to stay in a refrigerated trailer between takes so that he wouldn’t sweat and cause all the paint to run off. It must have been a big hassle to shoot such a make-up heavy show in the late 70’s, early 80’s. 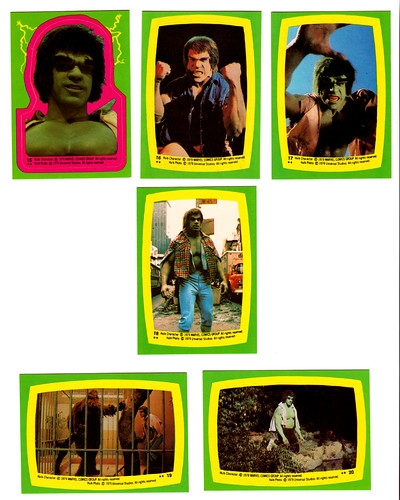 There are some interesting shots on these stickers as well. In the top left, sticker # 15, there is a rare shot of Ferrigno smiling, and in the bottom right, card # 20, we can see a clearer shot of the hulk in his "protective foot gear" booties. Also sort of interesting is card # 16 (top row center), which has some weird lighting making the Hulk look sort of red which is almost what happened on the production of the show. Apparently Kenneth Johnson (the executive producer on the Hulk series) wanted to change the Hulk’s iconic green coloring to red to reflect the anger the character was feeling. This is just another entry in the long list of weird stuff that producers want to change for properties they work on, no matter how established in the public consciousness they are. I can just imagine a producer on the Spiderman flicks taking Sam Raimi aside and suggesting that Spidey wear a cape, you know so that people will know he’s a super hero.

Another weird bit of trivia on the TV show that I read on IMDB is that the reason Johnson chose to change Bruce Banner to David is that he felt "Bruce" sounded too "gay". That’s just silly.

On next week’s Peel Here I’ll delve a little further into the wonderful world of 80’s Marvel super hero stickers.  Until then, don’t key any cars or you’ll make a kitten cry, and that’s just mean…

I measure my years in Coreys…