So here we are again with another installment of the Essential Hostess Ads, Vol. 3 part 2 1979-1981. I hope to start work on compiling enough of the Marvel versions of these ads to put together some Essentials of those as well. 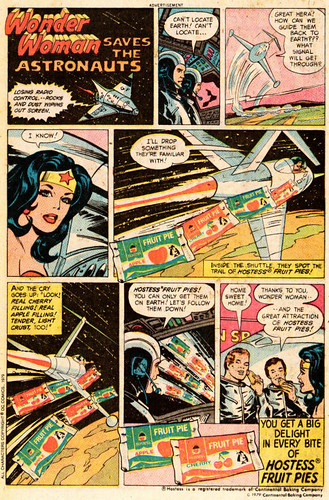 You know I don’t want to continue ragging on all of these Hostess ads, but c’mon man, a trail of fruit pies is the solution to this space dust problem? If they can’t see out of their windows to see a giant blue planet, how they hell are they going to see those fruit pies? Wonder Woman would have been better off flying up to the shuttle and wiping the windows with one of the damn tasty pastries! 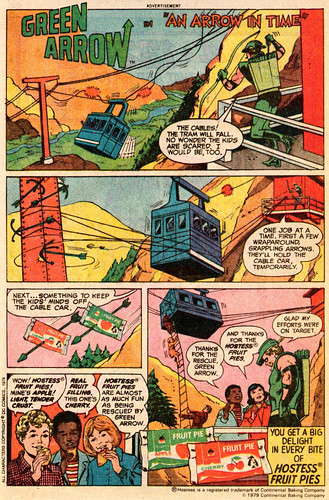 Oh my god. The first speech bubble in this ad is the definition of obvious. It’s the equivalent of witnessing someone get shot and saying, “Look, that guy got shot, no wonder he’s howling in pain with a big bloody hole clear through his hip!” Come on Green Arrow, I thought you were snarkier than that. You know, now that I’m thinking about it, it’s probably not a bright idea to be slinging fruit pies on arrows towards a bunch of kids. I can just see little Suzie, who didn’t make it out of the tram because there’s an arrow through her head with a fruit pie on it. 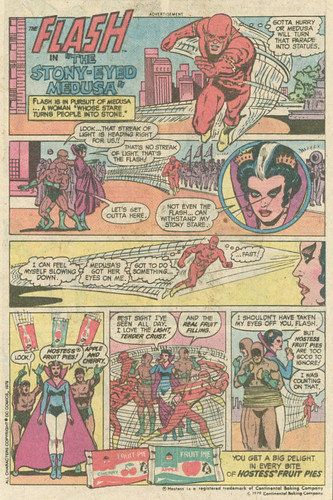 Okay, here’s the problem with super heroes in a nutshell, if you don’t strip the villain of their powers somehow, how do you expect to keep them captive? I can’t count the number of times I’ve seen villains like the Rhino or the Scorpion (Spider-Man comics) in some sort of holding cell, completely suited up but in manacles or something. Dude, strip them down so they can’t break out. If you arrest Mr. Freeze, destroy his freeze gun; don’t store it in a box next to the manacled Mr. Freeze. I’m not clear as to how tying up Medusa will keep her from proceeding to stare that parade into stone after she’s done eating that tasty pastry. Lazy, pure and simple.

Superman in the Ionic Storm 1979 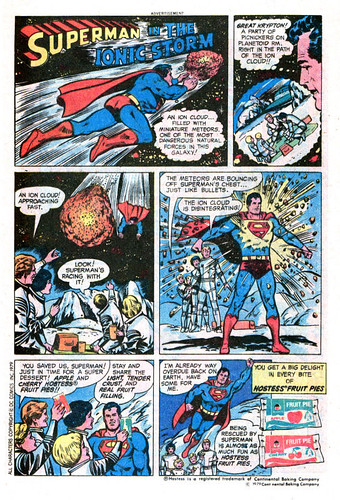 Man, the entire strip here is such a MacGuffin. I mean, Supes didn’t use the fruit pies for crap. In fact, this is the perfect example of the no eating Hostess products clause DC had in their contract. “Screw you and your Hostess fruit pies, I’ve got shit to do. In fact, let me fly around Planetoid RM a few times to turn back time so that I can watch that ionic meteor shower tear your dumb picnic to shreds.”

Aquaman and the Space Capsule 1980 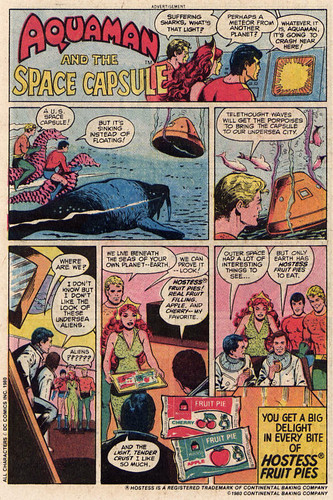 Once again, Aquaman proves that he’s about as useful as an anus right here (pointing to my elbow.) Why is his first thought kidnapping the capsule? Why not help it get to the surface of the water? And why in the hell are those astronauts so dumb that they thought that after coming down on Earth, into the sea no less as protocol would dictate, that they would be confronting aliens? As for the payoff to the whole strip, I’m sorry Aquaman, but didn’t you read the Superman strip about the family picnicking on Planetoid RM? Didn’t you see them eating their tasty fruit pies at the end? Hostess doesn’t in fact equal Earth, it equals bad storytelling. 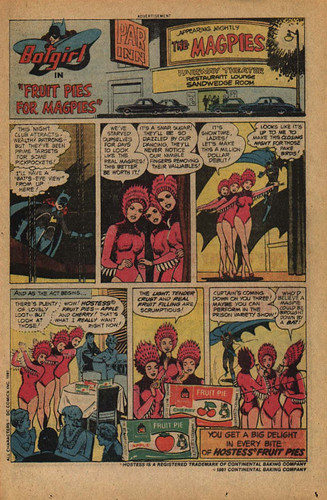 Sigh. So where exactly did these girls think they were going to stash their pick-pocketed loot? These chicks are about as brilliant as that group that wanted to steal the city’s oil supply. Hey maybe they’re the same super intelligent theft outfit. Also, is it just me, or is this like one of the most sexist Hostess ads ever?

Penguin in Penguins on Parade 1981 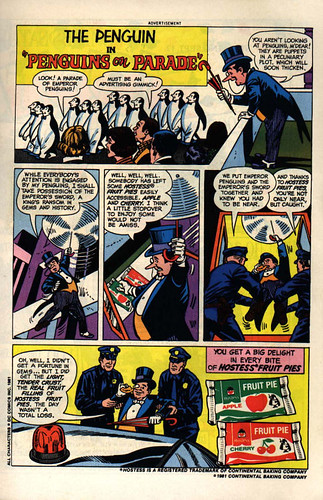 First off, this strip was doing pretty well up until the end. Straight forward with a slightly silly bent to it. Then the gag had to be emperor penguins and an emperor sword. You know, I believe the Penguin’s gag is that he involves ornithological elements in his crimes, not regal ones. I love that the writer (like the writer of this Batman Hostess ad) broke convention and has the Penguin munching on that flaky, tasty pastry. I hope it’s the same dude, some young buck of a writer thumbing his nose at the bureaucratic ad department establishment at DC. “Ha ha, you bourgeois panty waists, I’ll have the whole DCU eating fruit pies before I’m done!”

Superman in the Laughing Gas Bandits 1981 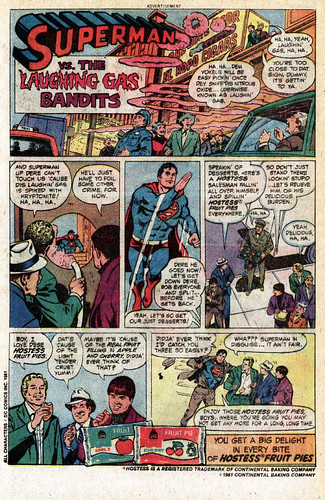 Okay I’m lost here. Didn’t the crooks cover themselves with the whole Superman angle by disseminating Kryptonite into the nearby area? I mean, Clark changing into Hostess fruit pie salesman duds doesn’t counteract the effects of the fabled green rock does it? Anyway, I have to give the writer some credit on this strip, it’s freaking weird and fun and I was so hoping the bad guys would win with a plot this thick. I mean do you know how much it probably cost them to secure that Kryptonite? More than they would have netted picking pockets. To me that just means that these thieves are more concerned with quality than quality; the act itself is reward enough.

I can wait to start breaking out with a bunch of the Marvel versions of these ads, as it should be enlightening.