I thought I’d talk a bit about the Ewoks DVD today.   I don’t hate this cartoon, but I do hate the way Lucasfilm has handled the property.  Basically what this release is, is 8 episodes from the first season of the show cobbled together to form two very unbalanced animated films with new adult Wicket voice-overs. 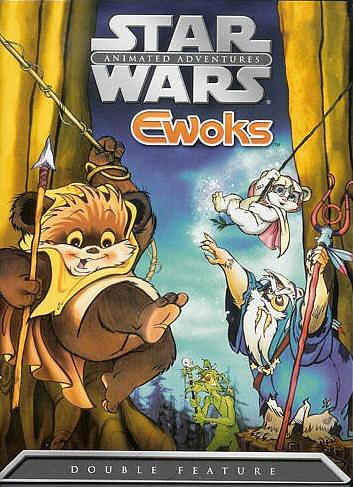 What we don’t get is the opening theme song, original end credits, and I have a feeling original music (though I guess I’ll never know since this will probably be the only release in this format.)  At least the “chapters” are labeled with the original episode titles.  I know this sounds nit-picky and in the vein of the “complainers” of the ill done reissues of the Original Star Wars trilogy on DVD, but come on.  What is the purpose of releasing an old saturday morning cartoon, almost certainly because the fans demanded it for nostalgia purposes, and then heavily editing it so that it has almost no feel of how it originally aired?

I don’t particularly want this in my collection, but I do want episodes of the show, so I bit the bullet and bought it.  I outright refuse to buy Droids though as I didn’t care as much for that cartoon and can wait for a better version (though it will probably never come…)

There’s only one thing to say about the Topps Mars Attacks Book: Ack Ack Ack!

Return of the 31 Days of Monsters, Day 20: Victor, the creepy baby-eyed ghost…