And there goes the Challenger, being chased by the blue, blue meanies on wheels…

So in the wake of my burgeoning interest in car flicks, post Death Proof, I finally got around to catching Vanishing Point, the 1971 road film that, like Dirty Mary Crazy Larry, is one long car chase.  This flick above all else, is the film most mentioned in Death Proof, both by the characters and with the use of the white 1970 Dodge Challenger that the girls are test driving at the end of the flick.  Like all the other car flicks I’ve seen lately, I tried to go into this with unspoiled and with an open mind. 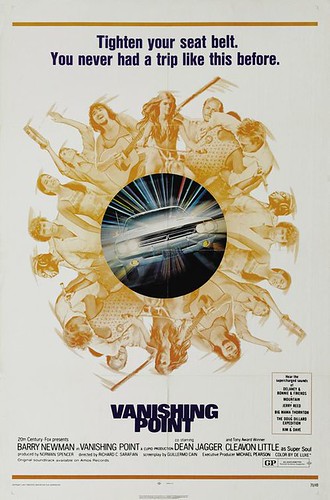 Like Two-Lane Blacktop, this flick begins with a slow burn that builds up to become much more than the sum of its parts.  The inter-cutting of scenes with the main character Kowalski (played by Barry Newman) with those of DJ Super Soul (played by Cleavon Little) are first unexplained and odd, but soon become weirdly telepathic, where one character becomes the body and the other the voice of a being that is past it’s time on this earth.  The films existential leaning, though, isn’t as up front as Two-Lane Blacktop, as the director (Richard C. Sarafian) and the writers (Malcolm Hart & G. Cabrera Infante) very creatively insert some telling flashback sequences that throughout the film bring the audience up to speed with Kowalski and suggest some reasoning behind his long last stand on the road.

Though the film is structured a little more commercially viable than Two-Lane, it’s not quite as much so as Dirty Mary Crazy Larry and not nearly as mundane as most of Gone in 60 seconds, so it’s kind of cool to see a progression of existentialist road movies throughout the 70’s.  It’s kind of interesting to note that in TLB speed alienates, in DMCL and VP speed kills, and in GI60S speed titillates because by that point people were becoming so enamored by the action that they were probably looking past the meaning.  This is an downward spiral that action movies take throughout the 80s (with films like the Smokey and the Bandit, Cannonball Run, and even to a point Top Gun) and which ends ultimately with films like Days of Thunder or Speed and its utterly pointless sequel, Speed 2: Speedier on a Boat No Less (or what ever the hell it was called.)  Car movies are all flash and hardly any substance anymore.  Stuff like the Fast and the Furious or the Transporter (though both fun and exciting) are simply eye candy.  Honestly, Death Proof isn’t much better, but at least it turns its head back in the direction of the 70s flicks that it pays homage to.

I’m curious is this is one of the first times the where the whole DJ as a confidant/copilot concept makes it’s way onto film.  It seems like a very stereotypical idea now, but I’m not sure where it came from.  I also really dig its telepathic inference, which reverberates nicely in later cinema like in the scenes between the Forest Whitaker titular character and Raymond (played by Isaach De Bankole) in Ghostdog: Way of the Samurai, where even though neither character can understand each others language, they still hold up their ends of a conversation through some sort of unexplained telepathy.

I also think that this is a pretty tight example of counter culture cinema, in the vein of Easy Rider, so it’s sort of funny to see that there was a made for TV remake in ’97 starring Viggo Mortensen that completely ditches Kowalski’s drug fueled existential ride to the end with a plot about having to get home for the birth of his baby.  That just sounds so silly.

Day 2 of the Halloween Countdown: If there’s some trash you want to mash, Who You Gonna Call?

Peel Here #82: "I ain’t gettin’ on no plane, and I don’t smell like chocolate you sucker!"