This is blood for blood and by the gallon. These are the old days, the bad days, the all or nothing days…

Sin City isn’t a perfect film; in fact it isn’t even close.  It’s hard to say inclusively that it’s bad or good, because there are a lot of different aspects to the flick.  I can say that I loved it, even for its issues. 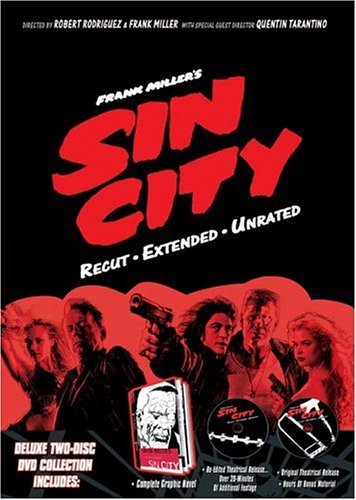 As far as translation from book to screen, the movie is near flawless.  Rodriguez and Miller have managed to recreate Miller’s heavily stylized comics on the big screen without losing an iota of the heavy black or stark white.  They also manage to keep the dialogue and internal monologue intact, which are both a merit and a major problem with the film.  Most people who’ve read Miller’s Sin City work don’t make the connection to Mickey Spillane and Sam Spade, to Humphrey Bogart and the lingo of the Hard Boiled detective pulp novels.  So when they hear the dialogue in the movie delivered in such a manner it’ll probably come off as comic or exaggerated.  People today just don’t remember or care for the older genres that so many of today’s writers and directors fell in love with as children.  People expect an update not a faithful homage.  Yet they complain when they feel a book to film translation isn’t faithful.  Simply put, people don’t know what they want.

That being said, I think the theatrical cut of the film also suffers a little in it’s editing.  Being so faithful to its graphic novel roots, I feel that Rodriguez failed to treat the three novels as individual stories.  The three chapters blur into one another in a slightly uncomfortable manner with only a change in narrator to tip the viewer that we are switching gears.  I think the film would benefit from titled chapters (ala Kill Bill) or better yet, a title card utilizing the original Miller artwork for each chapter, which would be in keeping with the source material.  Thankfully, in this box set we also get the opportunity to view these stories separately which significantly adds to the experience.

The film is also heavily CG’d, but I think that helps to define baSin city as its own world just outside of our reality.  It also makes it easier to swallow the use of bright highlights of color and the exaggerated cartoon violence, though I know that there are a lot of older film fans that think the movie is actually a CG cartoon, so maybe it’s not for everyone.

I also feel the film was superbly cast with Mickey Rourke as a standout and Elijah Wood as a surprisingly creepy Kevin.  Though at the end of the day I pretty much enjoy all of the performances, I was a little bummed by both Bruce Willis and Jessica Alba’s Nancy.  Willis just didn’t nail the exasperated, at-the-end-of-his-rope Hartigan for me.  As for Alba, honestly, if you’ve got a problem with on screen nudity, don’t audition for the role of a stripper.  I’m surprised that Miller and Rodriguez decided to leave Nancy dressed through the film seeing that they accurately portrayed the over the top violence and gore.  I mean, the silhouette of a half naked Nancy, back lit with lasso in the air is a trademark image of the Sin City books.

All in all I think a lot of people are going to have a problem with aspects of the film that are actually quite faithful to Miller’s graphic novels.  The "corny" dialogue, over the top unrealistic violence and action, the slightly cartoonish or simple characterization, all of these are in the Sin City books, and I think a lot of fans forgive this in the comics but won’t in the film.  To me this points to unrealistic expectations of the adaptation to the silver screen, or more commonly, be careful for what you wish for, you might just get it.

For the special edition DVD I think that Rodriguez and company outdid themselves.  There are two insightful commentaries, tons of making of featurettes including a fast forward view of a large chunk of the film sans CGI overlay, and a second and very fun installment of the 10 Minute Cooking School series, this time focusing on two types of breakfast tacos (including easy-to-make fresh flour tortillas.)  Not only is the DVD portion of this box set loaded and awesome, but you also get a complete copy of the first Sin City graphic novel packaged in as well.  For around $25, this is a huge bargain and should illustrate the gold standard for special edition box sets.  I mean, sure, statues and book ends are nice, but at the end nowhere near as cool as source material.  Why aren’t more special editions packaged with a print edition of a film’s script or something, now that would be great.

Peel Here #90: I’m only pretending these stickers are gay so my webhosting company doesn’t evict me…