Welcome back to another installment of Peel Here, a column where I delve into the murky depths that is 80’s stickers. This week we’re going to dig out some tasty morsels, like so many chilled monkey brains, as we take a look at two different sets of sticker merchandising for the flick Indiana Jones and the Temple of Doom.

Temple of Doom is such a weird flick for me as I remember seeing it before I saw Raiders of the Lost Ark, and it was also the film that I remember the most, probably because I had the storybook and record set that I listened to about 3 million times. To this day hearing a whip crack still makes me want to turn a page in a book. The film is also weird as it is a lot darker than Raiders and feels more like a 30’s era horror movie than an adventure flick. In fact, along with the Spielberg produced Gremlins, which was released the same year, there was enough tension with the MPAA film ratings board that a new film rating was born, PG-13, to accommodate these gorier, yet obviously not adult themed movies. It also marked the beginning of the end for George Lucas’ prolific decade of great storytelling, as he would really only have two more semi-influential flicks to follow, Willow and the Last Crusade.

So first up, sticker-wise, is the sub-set to the 1984 Topps trading card set. There were 11 cards in this rather silly set of sticker cards, and it’s one of the first I can remember that ditched both artistic background and the bold colorful outlines on the die cut stickers. Instead most of these feature comic-inspired word balloons with appropriate, though sometimes pretty dumb, quotes from the film. In particular the "Food? Really?" quote, though from a great scene in the movie, comes of just plain silly in this set. 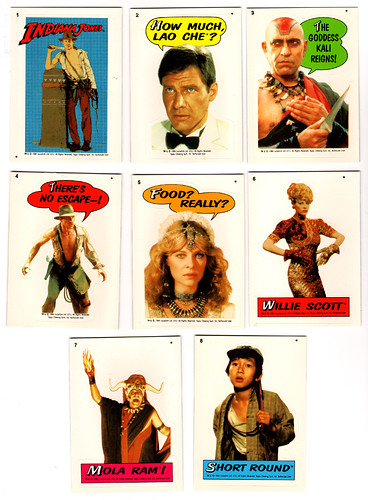 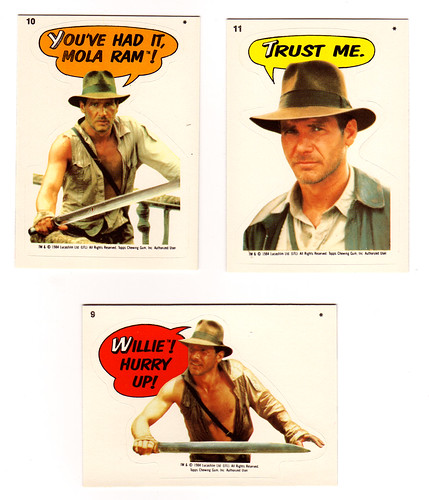 Like most Topps sticker card sub-sets, this set features a puzzle pieces, and one "what your completed puzzle should look like" card backs. This would also be one of the most basic of sets, at there were 11 stickers, pretty much all of which you’ll need to complete the 10 piece puzzle. 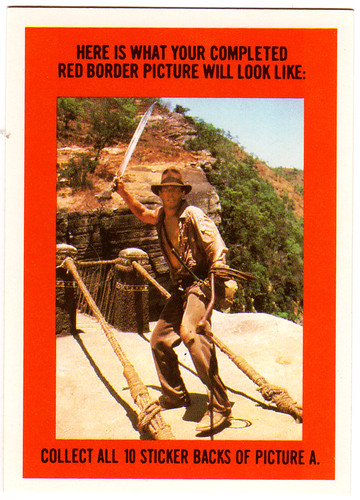 I’m glad that the puzzle isn’t a copy of one of the images used for the sticker set as that would be a little more incentive to procure all the pieces to see a brand new finished image (though it might be one of the regular cards, I’m not sure.) Though it’s a cool image of Indy, I think I would rather have had a nice puzzle of the dinner table spread in the infamous monkey brain & snake-eating scene. 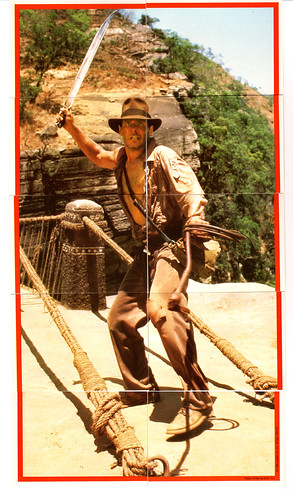 Now, as a second feature, I present one sheet of Temple of Doom puffy stickers, also from 1984. Now I’m not sure what the deal is with the very generic and silly packaging on these stickers. In digging through eBay looking for stickers I’ve noticed that all of the more common sets of puffy stickers were released both with more official looking branded packaging as well as this generic blue packaging with the rainbow and all that. The stickers seem to be the same, so I’m thinking that maybe either the unsold stock of stickers were repackaged later on and sold through discount outlets or that maybe they were distributed in other countries unpackaged and were then generically packaged by third parties. You see this some times with party supplies and some store-brand products. 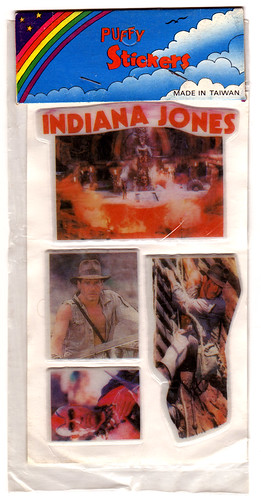 I was glad that I found these puffy stickers, as they differ a little bit from the Topps set and feature some of the actual Temple of Doom imagery.

Now, I’m not sure if there was any sticker merchandising off of the first film, but it sure would be cool to have some silly melting Nazi stickers, I’ll tell you what. Actually that reminds me about another aspect of Temple of Doom that I thought was interesting. ToD is actually a prequel to Raiders of the Lost Ark, as it takes place the year before. Lucas and Spielberg didn’t want to feature Nazi’s as the enemy in the film, so to avoid it they looked backwards into a previous Indy adventure. Just goes to show that at one time Lucas could in fact pull of a decent prequel idea. Cough, ahem.

Anyway, next week on Peel Here I’m going to begin another month long investigation into a single subject in 80’s sticker-dom, that of super hero sticker merchandising. So break out your under-roos, tie a towel around your neck as a cape and get ready for a butt-load of Marvel and DC goodness for the whole month of May.