What can I say about the original 1974 Gone in 60 Seconds that probably hasn’t been said before.  The flick is insanity personified.  I basically came to this flick after I saw Death Proof in the theater a couple weeks ago.  Since Tarantino also made a reference to this in Kill Bill (the scene where Texas Ranger Earl McGraw comes driving up to the wedding chapel massacre and the P.O.V. is from the driver so you see the dashboard and out the window; there is a row of sunglasses, each with different color lenses, this come directly from GISS), I figured it was time to finally sit down and watch it. 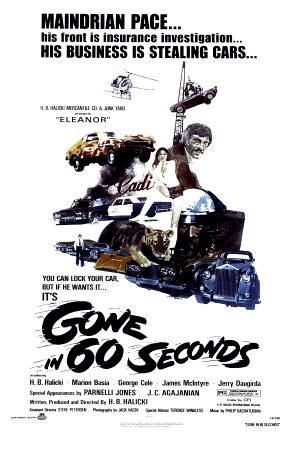 This is certainly one of the greatest examples of American cult cinema as it was independently written, produced and directed by H. B. Halicki a self-made businessman/gear-head.  Halicki also starred in the film as well as doing all of his own stunt driving, which even includes a unplanned crash into a telephone pole that resulted in halting production as Halicki was badly injured in the wreck.  Not only did Halicki write, produce, direct, act in, and do the stunt driving in the film, but he also owned or paid for almost all of the vehicles seen in the movie including the police cars and a garbage truck that he bought at auction for around $200 apiece.  To say this guy was 100% behind his film would be a vast understatement.

What kills me though, is that for all of this love, most of it doesn’t shine through unto the screen.  The first 50 minutes of the film are horrible, badly acted (mostly because Halicki cast friends and family in most of the roles to keep the production costs down), badly paced, and for the most part badly written, if only because the viewer has no idea what’s going on through most of the film.  Much of the initial dialogue is delivered via voice over because 75% of the footage is in long shots, so you really don’t know who is talking half of the time.  Even when the plot gets a little clearer later on there are still plenty of plot holes that aren’t explained (like who hired Maindrian in the first place.)  It also doesn’t help that all of the car thieves have the same disguise (which I have a sneaking suspicion was a big influence on Spike Jonze for his concept in the video for Sabotage by the Beastie Boys), so the viewer isn’t even sure which character is on screen some of the time.  The worst part though, is a 5-10 minute scene where Halicki inter cuts a plodding scene of his character walking through a warehouse looking at all of the cars his crew has stolen with a weird shot of Marion Busia (who plays his associate’s wife) as the camera just slowly arcs around her sad face while she sits in the crew’s office.  The scene feels like it’s ten years long and is utterly pointless.

All of this, though, is paid off in the last forty minutes when the film turns into one long car chase that has plenty of interesting gimmicks and gags.  Throughout the film Maindrian keeps having problems getting his hands on or keeping "Eleanor" a yellow 1973 Ford Mach 1 Mustang.  The film takes a drastic turn after Mandrian steals his back-up Eleanor and is double crossed resulting in a pretty daring police chase.  Somewhere in the neighborhood of 90 cars are wrecked in the ensuing chase including Eleanor, though she’s still able to drive pretty well (thanks to Halicki reinforcing her body for the stunt-work.)

At the end of the day though, this all makes for a pretty mundane film, especially when compared to similar flicks like Dirty Mary Crazy Larry, though it’s staunch independence makes it one heck of a unique viewing experience that will probably never be duplicated.  The perfect 3 star flick.

Cartoon Commentary! Eyes of the Hawk, Ears of the Wolf, Strength of the Bear, Speed of the Puma!