For some odd reason lately I’ve sort of fell into watching a bunch of car and road movies.  It started when a friend at work lent me his copy of Dirty Mary Crazy Larry and came to a head when I saw Grindhouse in the theater a couple weeks ago.  I completely flipped for Death Proof, and in total Kill Bill fashion, I’ve been tracking down the references and homages to get a feel for where he was coming from.  Death Proof is really a nod to three styles of film, the slasher flick (which I’m pretty comfortable with so I don’t really need to dig into that stuff), the car/road movie (which I’m getting into now), and chick revenge flicks (which I’m sure will be my next obsession.) 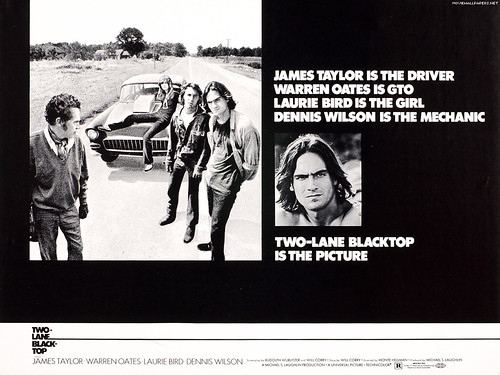 DP mentions a few flicks by name, DMCL, Vanishing Point, Gone in 60 Seconds (the original 1974 flick, not the remake), and when I started doing a little digging I realized that I couldn’t just do these three as there were a few more that sort of fit the bill as well, Bullit, Deathrace 2000, and Two-Lane Blacktop.  Well the first thing I realized when I started looking up all the car/road movie references is that a couple of those are out of print. I was lucky enough to have kismittically been introduced to Dirty Mary Crazy Larry, which was out of print, but so was Two-Lane Blacktop, also released by Anchor Bay and also now OOP (**Update**  there is now a nice version of the film available through Criterion, just click the picture above.)  I did some price comparisons and was bummed by my initial discovery that most sites like Amazon and stuff list it used, but for like $100 or more.  No movie is worth that, it’s just stupid extortion.  So I hit eBay hoping for bootlegs.  Some of the boots were pretty high priced, like in the $40 range, but luckily there was a dude in Australia selling some for $15 a pop.  I picked up a copy not expecting it to arrive until like next year since the international postage he was asking for was only $3.85 (very unlikely, but I went with it.)

I was surprised this past week to find it in the mailbox.  I chucked it in the player hoping it was a decent bootleg and sighed in relief when I realized it was a perfect port of the Anchor Bay release which meant it was nice quality and widescreen.  I wasn’t sure what to expect from the flick as I refused to read the blurb and wanted to go in completely unspoiled.  The flick stars a young James Taylor (yeah, that James Taylor, the Fire and Rain, ex-hippie soft rock king), Dennis Wilson (of the Beach Boys), Laurie Bird, and Warren Oates (who I only really knew as Sgt. Hulka from Stripes.)  Basically it’s sort of an existentialist gear-head flick that follows two friends, a hitchhiker, and a compulsive liar as they race across the country.

The first thing that surprised me was how much I loved both James Taylor (as The Driver) and Dennis Wilson (as The Mechanic); both perfectly nail that disassociated quietness that comes from truly cool obsessive hobbyists (you know the type, that dude that’s uber knowledgeable and has pretty much seen or experienced every aspect of something and just kind of hangs out mildly interested in the scene (think Chevy Chase in Caddyshack or Matthew McConaughey in Dazed and Confused.)  When they’re checking out potential cars to race against, and they’re rattling off engine types and model years it’s with a total stoicism that’s way more realistic and convincing than a more manic method approach (like Nic Cage in the Gone in 60 Seconds remake.)  Very early on you get used to the two as a unit, almost inseparable, so later in the film with the introduction of Laurie Bird’s hitchhiker, even though it’s played out very subdued, you can really feel the distance growing between the Driver and the Mechanic.  It’s kind of painful to watch (in a good way.)

Overall the film is very slow, plodding along just fast enough with almost no plot that you might actually fall asleep if it weren’t for the occasional engine revving or race.  Warren Oates’ character, an older guy with a much nicer looking car (a yellow 1970 Pontiac G.T.O.) than the duo (in their dark gray primer colored ’55 Chevy) ends up adding a lot of unnerving humor and a lightness to the overly brooding film.  He’s constantly picking up hitchhikers and coming up with a new spiel about how he ended up with his G.T.O., none of which you can believe by the time he hooks up with the duo.  There’s actually a great cameo by Harry Dean Stanton as a gay hitchhiker that manages to be both funny and very disturbing at the same time.

This movie plays out much in the same way that Jack Kerouac’s On the Road feels.  What probably helped this along was that the director Monte Hellman only dished out a day’s worth of the script at a time which seemed frustrating to the actors, but which helped to insure very organic performances.  He also tried his best to deprive the actors of sleep so that they would be in the same head-space as the characters which were on a non-stop trip.

The flick also has a very abrupt (though interesting), pre-third act resolution, ending which I think says a lot more about the film than I realized when I watched it through the first time.  The basic plot is that the duo, after picking up Laurie Bird, are confronted by Warren Oates’ character at a gas station (though they’ve sort of had a couple run-ins with him before where he tries his best to initiate a race and both times they blow him off) and you can tell he’s dying to get these three on the road with him, the two guys in a race, and the girl in his car.  After a bit of macho posturing, Taylor and Wilson challenge Oates to a race across the country to D.C. with the two car’s pinks as the trophy.  They put their pink slips together and mail them to D.C. care of general delivery and head out.

During the film all three guys make passes at Laurie Bird, who is more than willing, though only Wilson makes contact, however pointless and fleeting it is.  At the same time Bird is sort of wary of the guys as it seems that she’s looking for a bit of stability and all she can see in them is their need to race above all else, or in Oates’ case, a little bit on insanity.  Eventually she splits from the group and hitches a ride with some dude on his motorcycle, exiting the film and setting the tone for the rest of the picture which is when everyone sort of realizes that nothing is going to change and they all just sort of abandon the race, getting back to where they started the film leaving the bare plot resolution as a mere loose end.  The race is really just a MacGuffin.

Of Mystery Boxes, Laserpunks, and Kismet…