Peel Here #23, I told you there was an octopus in that one scene!

It’s a new week, and around these parts that means another installment of Peel Here, my column on everything 80’s stickers. This week I’m going to take a look at a set of stickers licensed off of one of my favorite 80’s kids flicks, the Goonies. Out of all of the flicks that fit into that sub-genre, ’80s-kid-gang-fantasy-action”, (like The Monster Squad, Space Camp, and the Explorers) the Goonies pretty much tops out as the best shot, acted and directed (in my book), not to mention the best example of how not to write a movie “down” to kids and yet still have it perfectly suited for most audiences.

I don’t remember much merchandising for this film as a kid besides the set of View Master reels I received at one point or another. I know that there was a storybook and read along record set that was narrated by Chunk, which you can score a really nice flash version of at Read Along Adventures, as well as at least one coloring book, a Milton Bradly board Game and an awful NES game/sequel, the Goonies II (which is actually a sequel to the Japan only NES game the Goonies.) There was also a plastic lunchbox that was either planned or released (I’ve never actually seen the lunchbox, but I did bid on an unused lunchbox sticker that looked pretty darn authentic last year.) The only other bit of merchandising that was released that I was completely unaware of (until I started buying up a bunch of stickers on eBay) was a set of Topps tracking cards with a nifty sticker sub-set. So without any further babbling, here are those stickers… 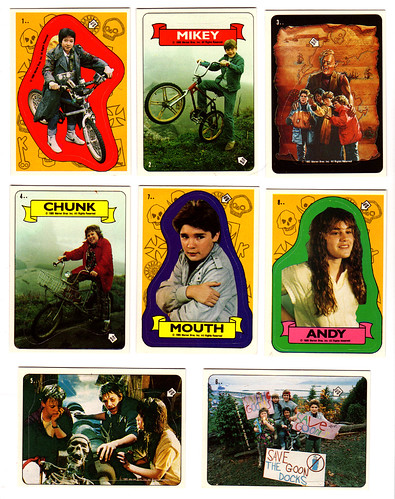 As far as the design work goes on these sticker cards, it’s all over the map. There are three basic designs here, full card stickers of the kids on their bikes, a couple full card stickers featuring movie scenes, and a handful of the more classic Topps die-cut sticker card portraits which feature a nice bold color outline. What kills me is that there is no balance between these. Only three of the main Goonies have the bike portraits (we’re missing one for Mouth) and of the ones that printed, only two have their names on the cards, (Data is missing a name banner as well as being die-cut unlike the Chunk and Mikey stickers.) Of the colored border cards, only Mouth, Andy, Mikey, and Sloth are featured (unless you count the Data-on-bike sticker), and there aren’t even stickers for either Brand or Stef.

This is also one of the only Topps sticker card sets that doesn’t number in a multiple of 11. There are 15 cards in the set, with your basic poster puzzle card backs, though even these card-backs have a design flaw. In order to complete the puzzle you actually had to get multiples of some of the stickers as a lot of the card-backs featured the same puzzle piece. There are seven cards in the set that have card-back variations, so an anal collector would actually need to put together a set of 22 stickers instead of 15 to have the ultimate Goonies sticker sub-set. 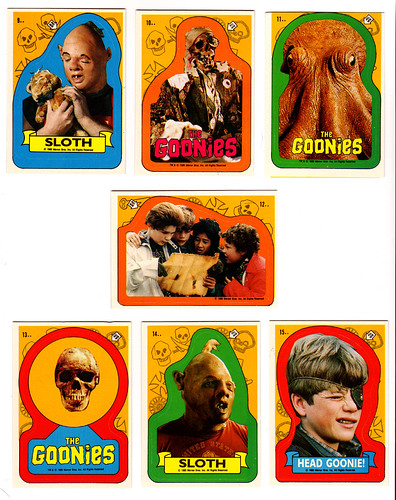 The one thing this set does have going for it though, are some pictures and scenes that didn’t make it into the actual film. There is an odd shot of Brand and the boys holding up some “Save the Goon docks/Goonies” signs, which though it works into the story, is very out of place since there was never a protest scene. The two pictures of Sloth are kind of weird too. In one shot he’s wearing a shirt that isn’t from his wardrobe in the film, and in the other he’s holding a weird stuffed animal that I’ve never seen before. I’m wondering if these were test shots or from alternate or deleted footage.

Also featured on one of the stickers is the infamous octopus, which was in a scene deleted from the theatrical version of the film (after the kids “walked the plank” into the water they were sort of attacked by an octopus which was killed/stunned by either Mouth or Stef after one of them stuffed a walkman into it’s beak.) This is the scene that makes the very end of the movie make sense (the one where all the kids are recounting their adventure and the octopus pops up.)

The octopus in the Goonies film is the perfect example of weird movie arguments that I’ve been having with my friends for years. Long before DVDs and the slew of now common extra features that accompany most movie releases, it was pretty rare for extra footage to surface form films. Most people didn’t even realize that there would be extra footage or deleted scenes; thinking that what they saw on screen was all there was to movies.

My first experience with deleted scenes was with the VHS release of the first Batman movie in 1989 or so. I was pretty obsessed with that first film and I collected all kinds of merchandising including the trading cards, which featured a couple scenes from the movie that I remember seeing in the theatre, but didn’t see on the VHS release of the film. In particular there was a scene in alley after Batman fights off a bunch of the Joker’s goons where a little girl pops her head out of some trash and looks up at Bats. There is a trading card of the scene and everything, but I couldn’t convince my friends that the scene was real.

Well the same was true of the Goonies. I managed to tape it off of the Disney Channel back in the early 90’s when were getting a free preview (back when Disney was a pay channel) and there were two scenes in the movie which weren’t on the normal VHS release; One with the kids stopping at a convenience store and running into Troy (who roughs them up a little and burns the edges of their map) and a second with the infamous octopus. I ended up ruining the tape after the first time I watched it so didn’t have any proof that these scenes existed until the eventual DVD release. Well, if only I’d had these stickers then there would have been much less fanboy arguing. 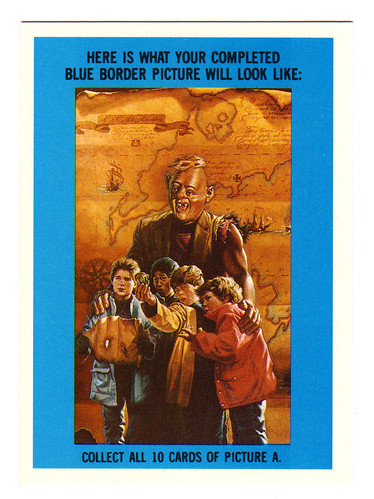 Of course, like any good Topps sticker card set this one features a poster puzzle. I really dig this one because it’s from a piece of production artwork, not to mention one of the more uncommon paintings relating to the film. It’s sort of anachronistic as it features Sloth overlooking the kids as they study the map, in particular the scene where they’re using the coin to match up with some rocks off the coast which is like 20 minutes before they even end up at the Fratelli’s hideout, but it’s pretty cool none the less. 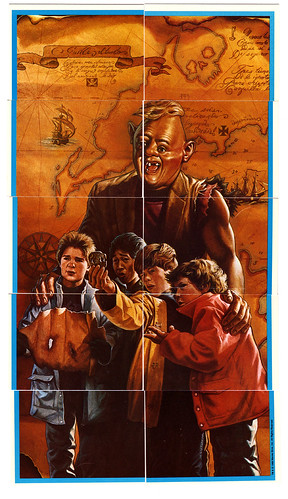 Next week on Peel Here, stickers from that other Ke Huy Quan classic of the 80’s. You know the one I’m talking about…

Going on an Adventure with Weegi and the Gang!

Expanding my backstory on episode 47 of the Nerd Lunch Podcast…