Peel Here #22, Daniel-san, this not tournament. This for real!

Here we are in another exciting week, and I’m back with a riveting entry in the Peel Here series. It’s been a awhile since I’ve posted an Anitoch sticker book (you know the ones, like in my first Peel Here post about the Ghostbusters) so this week I present the Karate Kid II sticker set & storybook.

When I first started digging into the mire that is 80’s sticker collecting, the one thing I was hoping to find over all else were some Karate Kid stickers. I have absolutely no memory of any, but I loved that movie so much growing up I was just hoping there was something that would surface. I really wanted to find something from the first film, I think because I was hoping there would be a sweet Johnny Lawrence sticker. William Zabka was my favorite villain actor growing up, and to this day I still recognize the Karate Kid, Just One of the Guys, and Back to School as the unofficial Zabka villain trilogy.

Alas, I couldn’t find any sticker swag for the first KK movie, but I did manage to find this beauty of a book published by Antioch Press in 1986 for the sequel movie. 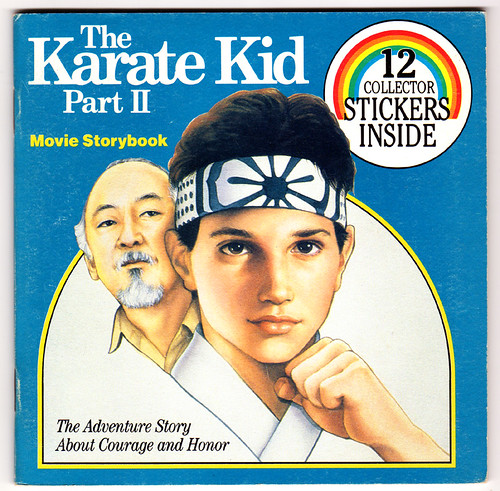 At first I was pretty excited that I managed to find anything KK related, first movie or not, but as I began to flip through the book all I could do was shake my head and laugh at the adaptation.

First though, lets take a second to look at the pretty awesome cover. If you’ll remember from when I was sharing the 1st Ghostbusters sticker storybook the cover was one of my main complaints. Sure most licensed products typically use production photographs and stuff, but I’ve always liked it when companies get a little more creative with design of their products. This cover is pretty cool. It’s a little plain, though the artwork is just as good as any of the drawings that adorned covers of the Choose Your Own Adventures series.

As far as the quality of the storybook though, well that’s not so great. Obviously the story is going to be horribly condensed, but this was pretty darn ridiculous. 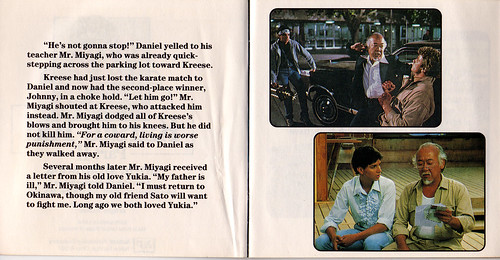 What really got me though were the photos. See there isn’t all that much room in the book, like 10 pages for photos, and the snapshots the layout and design people chose did a horrible job of telling the story. There are only a couple of good shots of Ralph Macchio as Daniel and hardly any of Kumiko. 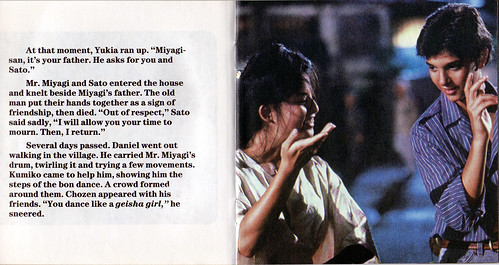 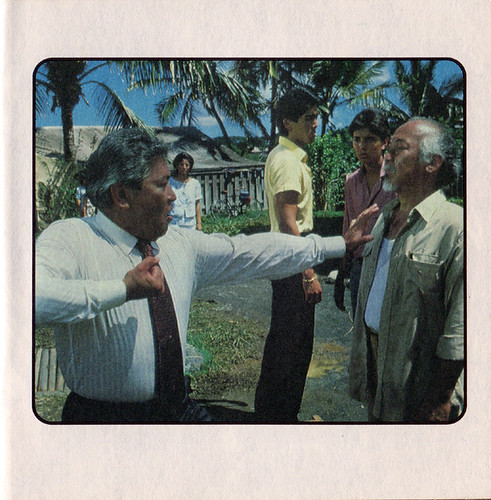 Then the next thing you know there are a bunch of pictures of Daniel getting his ass handed to him by Chozen. Sure, this is more or less what happens in the movie, but if you were a young kid flipping through this book who hadn’t seen the film yet you’d probably think Chozen was the hero who had to continously pummel this puny Daniel character. 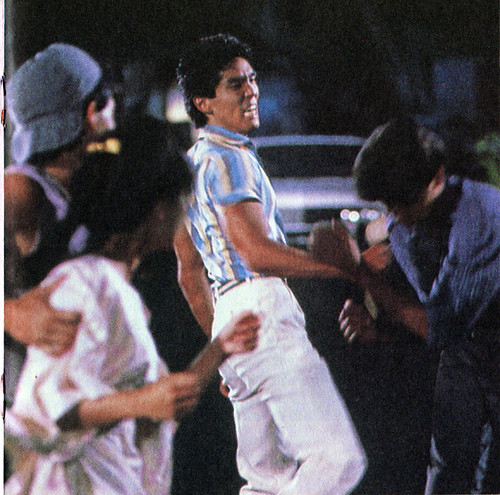 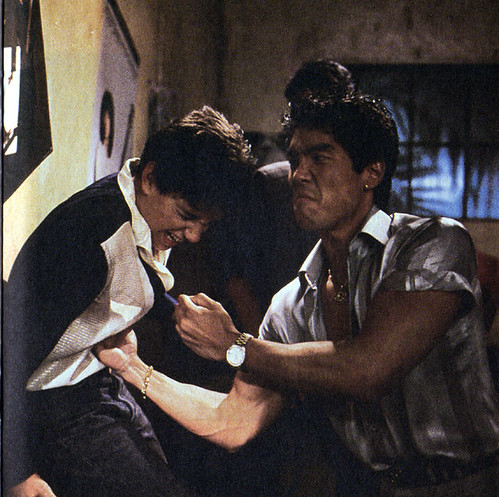 In fact the entire book builds up like this, with all these bad things happening and then all you’re left with of the final show down between Daniel and Chozen is this crappy summy on the last page of the book… 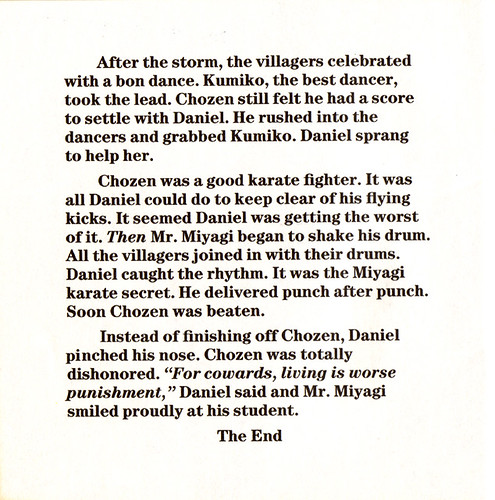 Not even a single picture of a victorious Daniel, and this horrible retelling of the fight. Hell I want to kick Daniel’s ass at this point, or at least the author’s. Anyway, this is neither here nor there as what we’re really in this for is the stickers, which besides the art on the cover, is way better than everything else in the book. All of the main characters get their own sticker on this sheet, which is awesome. All of the production photos chosen were pretty great as well. In fact, if I remember correctly, I had a very similar poster of Daniel from the top left sticker that I got at the theater when my mom took me to see KKII. 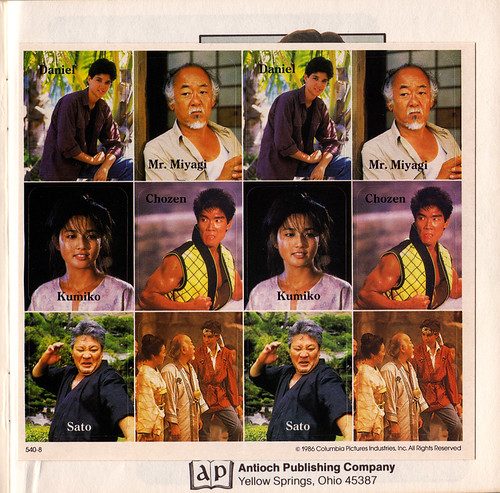 I still wish I could have a Johnny sticker, or at least a sticker in a sweet 80’s font that said, "Sweep the Leg!", but oh well.  Maybe I’ll unearth some KK Lazer Blazers someday.

Next week on Peel Here, it’s all about Mikey, Mouth, Chunk, Data, and a little Sloth too.

Wax Paper Pop Art #26, Sucking at a video game was never so pretty…